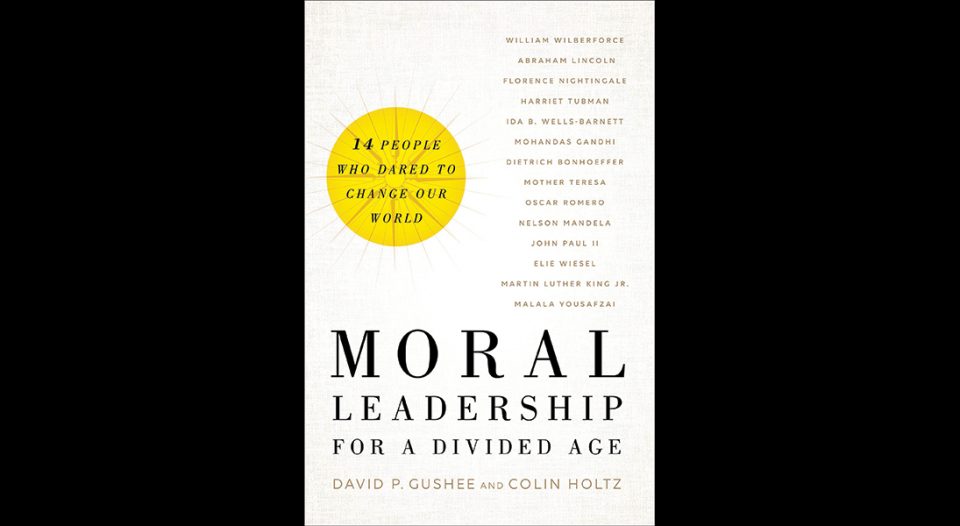 Perhaps you’ve recently found yourself consuming news reports coming out of Washington, D.C.; Syria; London; or Venezuela and asking, “Has there ever been an era more loudly crying out for moral leadership than the one we’re living through today?” It’s a fair question.

But if the 14 women and men whose lives and legacies are profiled in Moral Leadership for a Divided Age (Brazos Press, 2018) were asked that question, they might counter us about our view that our age is unique.

Co-authors David Gushee, a professor of Christian ethics at Mercer University, Macon, Ga., and Colin Holtz, a writer and advocacy strategist, believe we are shaped not by memorizing principles but by hearing stories. In this book, they offer compelling, memorable and textured stories drawn from the lives and leadership of figures from across the last 200 years, including William Wilberforce, Mohandas Gandhi, Ida B. Wells-Barnett, Oscar Romero, Harriet Tubman, Elie Wiesel, Malala Yousafzai and more.

“Moral leadership is fascinating precisely because it is not the exclusive province of any one religion or, indeed, of religion at all,” the book notes. “There is something in the human spirit that simply cannot help but gravitate to people who have led lives of great moral purpose. Moral leaders can serve as a bridge across the tribal chasms that divide us today.”

Each of the 14 profiles in Moral Leadership offers:

In the book’s introduction, Gushee and Holtz declare that “there are no angels in this book.” The “legacies and criticisms” section of each essay keeps the book from veering into a common pitfall of such literature: glossing over a person’s failures and lifting out only the heroic. In particular, the essay on Gandhi stands out for its clear-eyed examination of one less-publicized aspect of his life.

Most, if not all, of the subjects will be familiar to readers, but one is uniquely tied to the Lutheran church: German theologian Dietrich Bonhoeffer.

“Bonhoeffer remains an intriguing mystery,” the book states. “He was a theologian who did not become a Christian until after he had earned two doctorates, a young pastor who saw Nazi evil when his elders did not, an uncompromising pacifist who became a conspirator, a celibate near-monk who became engaged at the worst possible time, a kind children’s pastor who was one of the most uncompromising political figures of his era, and a traditional Lutheran who became a prison-letter sage pondering a religionless Christianity.”

While the Bonhoeffer chapter may be of most interest to our church context, the entirety of Moral Leadership is ready-made for engagement with the divided age in which we find ourselves.