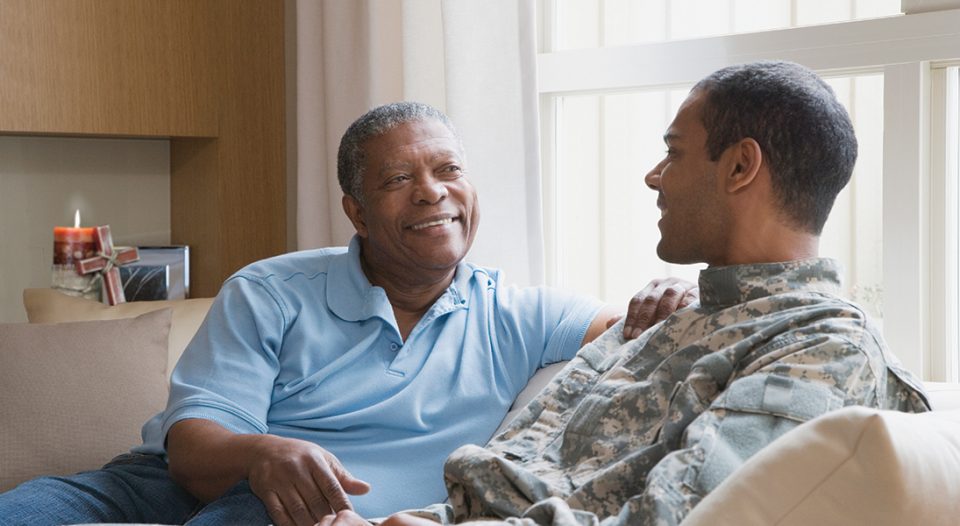 I had just finished leading a workshop for deployed Navy service members in which I offered suggestions for reintegrating into life in the U.S. A young man, probably no older than 25, asked if we could talk privately, then proceeded to describe his deployment. He’d spent a year in Iraq as an intelligence analyst, interpreting pictures taken by drones, identifying which people were “safe” and which should be “targets” for future military operations.

Yet this wasn’t what bothered him. He told me he was worried because he was so angry all the time. Furthermore, his angry outbursts would worsen the longer he stayed stateside. We discussed what was behind his anger, then his eyes began to well up with tears. “The things I see … just bad things … and to children,” he confessed. “No one wants to hear about that stuff, sir.”

I’m currently an activated Navy Reserve chaplain, and my assignment is to minister to military personnel such as this young man. While sailors pass through my command, I spend three to five days with them—in workshops, out on trips or just in conversation—to help them figure out where they belong in society.

So often I feel I fall short of that goal. These dedicated men and women—about 3,000 during my yearlong deployment—pass in and out of my ministry quickly, and I regularly ponder how they’re adjusting. When I think more deeply about them, I wonder who lays claim to them and who would say these people belong to them.

On May 27, we’ll observe Memorial Day. Traditionally, this holiday honors U.S. heroes who have died in the line of duty—military personnel, but also civilian first responders. In some places, living veterans are recognized for their service because it seems like the right thing to do.

But it’s not enough. We often view this holiday only in terms of physical death, yet I believe the young man I encountered and other military personnel I’ve met are wrestling with spiritual death. We also need to remember these living veterans and active service members who face isolating issues such as post-traumatic stress disorder (PTSD), suicidal thoughts, moral injury (asking, “Am I good?”), trouble reintegrating into their families and communities, and divorce.

We need to ask where the church comes in.

For many ELCA members, opening our communities of faith and even ourselves to the realities of war and military service is complex, both theologically and morally. But Lutherans minister to all, speaking life into death, proclaiming grace where none seems to be found and accompanying people from walks of life we don’t always understand. As church we must claim military personnel and their families, just as Christ claims us. Here are a few ways communities of faith can take action:

Be willing to talk about death, suffering and loss—and to listen.

Nearly every service member I know, myself included, has lost a comrade, usually someone close to them. To help, members of your community can make themselves available to discuss with service members the realities of suicide, PTSD or survivor’s guilt. We need people to be willing to talk with military personnel about what’s affected them most deeply. Inviting such conversations means you’ll be doing a lot of listening. It can be uncomfortable, but it will foster connection.

Research ELCA resources to create ceremonies, worship services or programs for military personnel and their families in your ministry context.

One pastor I know created a neat tradition for veterans. He held a breakfast honoring them, and beforehand he invited the veterans to observe morning colors, the long-held military tradition of saluting the U.S. flag as it is raised at the beginning of the day. As veterans return home, services of washing, healing and thanksgiving for baptism can help them cope with their experiences during deployment. (For ELCA resources, click here.)

The military has a deep tradition that most service members find meaningful, and connecting our religious traditions to their experience can be just as good.

Care for your military families.

Many congregations will add deployed service members and their families to their prayer lists yet go no further. The reality is that when a mother or father deploys, this becomes a single-parent family. There are also single-parent service members who must leave their children with friends or grandparents when they deploy. Faith communities can support these military families by reaching out and assisting with household responsibilities.

For service members, it’s meaningful to know that their family is being cared for in their absence. When they return from deployment, congregation members could sponsor nights out for those parents by offering child care. Additionally, parishioners could offer a mentoring program to guide returning military personnel back into home life and their church community. For children of military families, consider mentoring or care programs that address their specific needs.

There are a variety of other ways to minister to military personnel and their families, but the key questions remain: Do we say they belong to us, to our communities of faith? And how would they know?