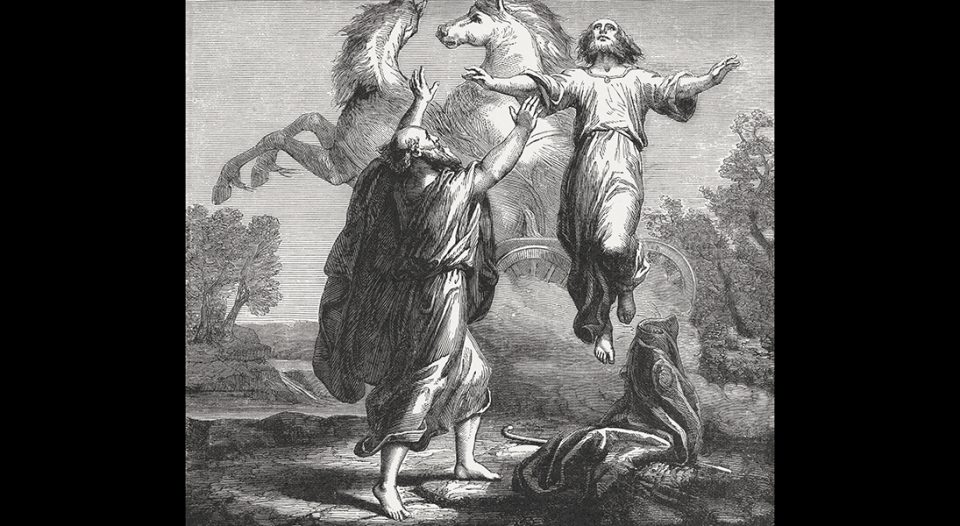 The Rapture of the Prophet Elijah and Elisha takes his succession (2 Kings 2). Wood engraving from the "Illustrated Family Bible after Dr. Martin Luther."

This week’s lectionary readings are about masters selecting disciples who will carry on their work. Over the course of my relatively short working life, more than a few times I’ve been hired for a job only to ask, “What am I supposed to do now?” Sadly, apprenticeship and training aren’t parts of many modern-day careers and we have to make it up as we go along. This wasn’t the case during biblical times.

Last week’s passage from Galatians talks about God’s law as a παιδαγωγὸς/paidagogos or, in Greco-Roman society, ever-present tutors who were with young people all hours of their waking life to help them learn and grow into full maturity (Galatians 3:24). I appreciate this image of a constant trainer who models how to act in every facet of life. The ubiquitous presence of a trainer shaping the growth and formation of disciples is exactly what is envisioned in this week’s passages from 2 Kings and Luke.

As Elijah was about to be taken up to heaven, he told his disciple Elisha to leave him at various points (2 Kings 2:2-6). But Elisha, who had followed his master closely since his calling, couldn’t stand to miss a minute of time learning from Elijah. When the time came for Elijah to be taken up to heaven, Elisha tore his clothes in grief at losing the daily presence of the man who had trained him to be a prophet. Elisha then used Elijah’s oversized cloak (the Hebrew word used here denotes something gloriously ample) to divide the Jordan River, just as he had seen his master do before (2 Kings 2:8, 14). This act confirmed Elisha as his master’s full successor.

A few years earlier, Elisha had shown his dedication to Elijah’s task immediately after his call (1 Kings 19-21). As Elijah was walking along, he came upon Elisha who was using 12 yokes of oxen to break up some exceedingly tough ground. Elijah threw his mantle upon Elisha’s shoulders, claiming him as a successor without any sort of discussion that was recorded in the biblical text. Elisha understood what was being asked of him and accepted.

But first he asked to go home and kiss his parents goodbye. Elijah replied brusquely that Elisha should go back to his parents (and not follow him), since wearing the prophet’s mantle hadn’t been enough to sever his connection to his former life. Elisha, perhaps seeking to prove himself worthy of the calling, didn’t return home. Instead he sacrificed all 24 oxen and used the wooden yokes and plow to kindle a fire to cook the meat. There would be no return to his parents or to a life of farming after destroying the means of cultivating the fields. After this overwhelming show of separation from his former life, Elisha ran after Elijah to become his servant and learn from him.

This is the kind of radical separation from former ways of life that Jesus required of his disciples. As Elisha did, someone asked Jesus if he could follow him after saying goodbye to those at home (Luke 9:61). In response, Jesus referenced Elisha turning from his plow, saying no one who puts his hand to the plow but then turns back is fit for the kingdom. But Jesus cleverly flipped the script, saying following him is compared to the plowing that Elisha gave up. Those who do the work of the kingdom are metaphorically breaking up stony, unproductive ground to prepare the way for new life and growth. But if you take your eyes off plowing, or worse look behind you, the draft animals may wander and the rows won’t be straight or maximally productive. The work of the kingdom requires full concentration and devotion.

The work of the kingdom requires full concentration and devotion.

Similarly, a man asked if Jesus could wait for him to become a disciple until after he buried his father. Jesus told him that the dead should bury their dead, but that he should proclaim the gospel. The father probably was still alive, as burials followed death quickly in areas without refrigeration and in cultures that didn’t practice embalming. Because the man was talking with Jesus rather than caring for his father, mourning or preparing a body for burial, we can be reasonably certain that death wasn’t imminent. Jesus is clear that serving him takes priority over family obligations (Matthew 10:37). The man apparently agreed to follow Jesus, though, because he is referred to as “another disciple” (Matthew 8:22).

Lastly, another potential disciple boldly claimed that he would follow Jesus wherever he went. Jesus, in return, gave him fair warning that the Son of Man has no place to lay his head. Jesus never seems to have built up any treasure in this world. He had no home of his own, despite being a carpenter and mason by trade. The only object of value that he possessed seems to have been a particularly nice tunic (John 19:23-24). While Jesus was [in]famous for his presence at dinner parties and feasts (Luke 7:34), only invitations from others kept him and his disciples fed. They had no security, no money in the bank and no fallback plan. Following Jesus meant trusting in God’s provision through the kindness of others, without a safety net. For those who walked with Jesus, there could be no half-hearted following—they would have to give up their former lives completely, dying to their old selves to follow him.

The good news is that Jesus over the years seems to have allowed the process of dying to self. He didn’t chase anyone away from him following him, but honestly quoted the price of discipleship up front. I think about James and John and their encounter with the Samaritans, who are also part of this week’s readings. They wanted to call down fire on the Samaritans who refused Jesus hospitality when he intended to spend the night in Samaria (Luke 9:52-54). But Jesus rebuked them, their retributive violence and their feelings of being entitled to hospitality. A few years later, John returned to Samaria, not to call down fire to destroy, but to pray for the fiery presence of the Spirit to come upon them (Acts 8:14-17). This radical reversal of John’s understanding of what God might want to do with the Samaritans led to a fundamental reorientation of John’s former hatefulness toward serving with love the people he previously despised.

John had to die to his prideful, violent self in order to serve the kingdom, and so do we. God calls us to a radical commitment to the work of the kingdom. Not many of us are called to be itinerant preachers (probably). But all of us who follow Jesus are called to die to self, including our understandings of who is worthy, what is important and what good living looks like. Instead, we are simply to imitate our master who calls us to come and follow him.