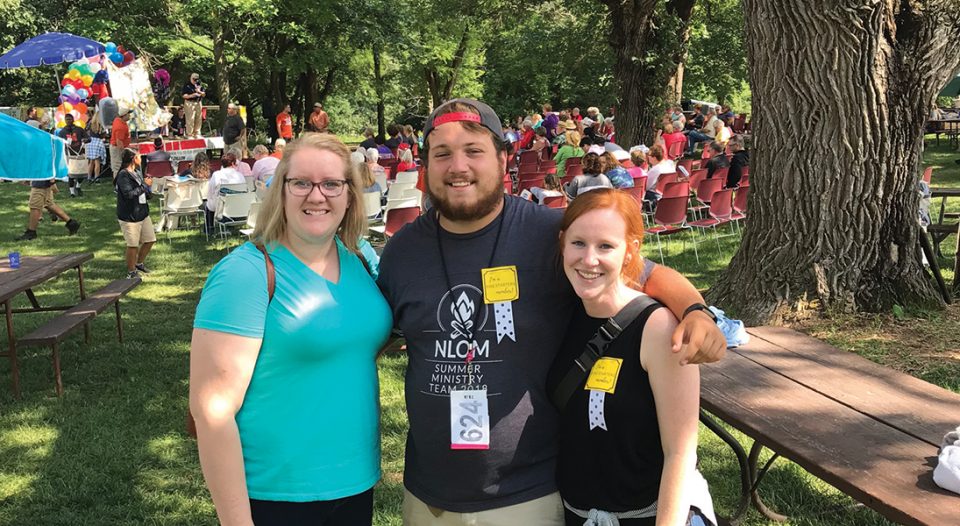 During the summer, Eli Neitzel, 26 (center), works as a counselor at Carol Joy Holling Camp, Ashland, Neb. Neitzel describes the camp as his church home.

For Eli Neitzel, worship happens under the stars, in the flickering glow of a campfire, surrounded by trees. At his church, you won’t find hymnals, pews or Sunday best. Instead, it’s muddy shoes, sweaty bodies and an intergenerational chorus of voices accompanied by guitar.

Neitzel’s home church is Carol Joy Holling Camp in Ashland, Neb., where he’s spent every summer since he was a high school freshman. Now, Neitzel, 26, is a teacher who serves on the camp’s staff during his summer break. “The reason why I love to call camp my church home is [it’s] the strongest place where I can see Christ through others,” he said. “It’s more of a family.”

Growing up in the small town of Mariposa, Calif., Sarah Amundson longed for Lutheran peers. Her congregation had no youth group; she took confirmation classes alone. Then, in seventh grade, she attended El Camino Pines, an ELCA camp in Frazier Park, Calif.

“This was the first time where I had a faith community where everyone was my age,” she said. “Going to camp and having all these [Lutheran] friends … was life-changing.”

Today, Amundson, 19, interns with Mount Cross Ministries, a camp and retreat center in Ben Lomond, Calif. Though her childhood congregation is still influential in her life, she sees Mount Cross as her primary church home. The relationships she’s built at camp—with her peers and others—run deep: “They’re ever-changing and ever-growing … and helping me grow [in faith].”

“This was the first time where I had a faith community where everyone was my age.”

When Mary Lindeman, 22, transitioned from longtime camper to first-time counselor at Lake Chautauqua Lutheran Center, Bemus Point, N.Y., it transformed her faith. “Being at camp for a whole summer is more impactful than two or three weeks as a camper,” she said. “There’s a lot of group building … that I don’t necessarily find at a traditional church.”

The life-giving community that young adults experience as LOM staff is one reason many see camp as their church home, said Savanna Sullivan, ELCA program director for young adult ministry.

Whether Lindeman is bonding with fellow counselors or talking with campers about daily “grace moments,” she credits her Lake Chautauqua community with strengthening her relationship with others—and God.

At Lutherlyn in Butler, Pa., young-adult counselors play a critical role in tending to campers in loco parentis (“in place of a parent”) for the week, said Bill Sweeney, 20. This summer is Sweeney’s 15th at Lutherlyn, his fourth on staff and his first as a unit leader.

Sweeney grew up as part of an ELCA congregation in Saxonburg, Pa., but explained, “Camp’s always been my main source of religion and where I feel the most faithful.”

“At camp you’re in shorts and jerseys, you’re your full dirty self. No one cares how dirty you are—you’re still accepted and loved.”

For Emily Lotocki, a 23-year-old counselor at Lake Chautauqua, leading daily worship has been a comfort and a challenge. A singer, she takes charge of the music. Lotocki and her fellow counselors also share their faith through loving relationships with campers.

“One of our biggest mottos is ‘seeking the one,’ [meaning] if there’s somebody who looks like they’re not fitting in, we seek them out and include them,” she said.

Though Lotocki considers herself Lutheran, she doesn’t attend an ELCA congregation regularly, a decision she attributes to lack of young adults in congregations. What camps do better than congregations, she said, is focus on inclusion.

Sweeney agrees: “At camp you’re in shorts and jerseys, you’re your full dirty self,” he said. “No one cares how dirty you are—you’re still accepted and loved.”

“A place where I could be myself”

Lutherlyn counselor Ben Ashton, 24, surmises that young adults favor LOM over congregations because they “don’t want to fall into the hate that [some] Christians present.” At camp, he’s seen people who identify as LGBTQIA+ embraced in ways they haven’t been at church.

Ashton has attended Lutherlyn since he was 5. The camp community, he said, has supported his faith journey even in his times of doubt. “[Lutherlyn] really helped me define my faith and figure out what I want to believe,” he added. “Camp was always a place where I could be myself.”

In LOM, Sullivan said, many young adults find a faith community more flexible than most congregations are. “[Camps] are more open to new ideas and willing to engage in questions about all the different ways people can experience God,” she added. “That speaks to young people.”

Although the six young leaders interviewed for this story don’t call an ELCA congregation their home church, each wants to be acknowledged as an active member of the ELCA. And they all affirm the important role congregations play in connecting children to LOM.

Studies show that the church is aging but, as Amundsen argues, that doesn’t mean it’s dying. “Just because there aren’t a bunch of young adults in the pews doesn’t mean [we’re] not out in the world doing God’s work,” she said.

Next month: Hear how young adults at ELCA colleges and universities are growing in faith through interreligious programs.