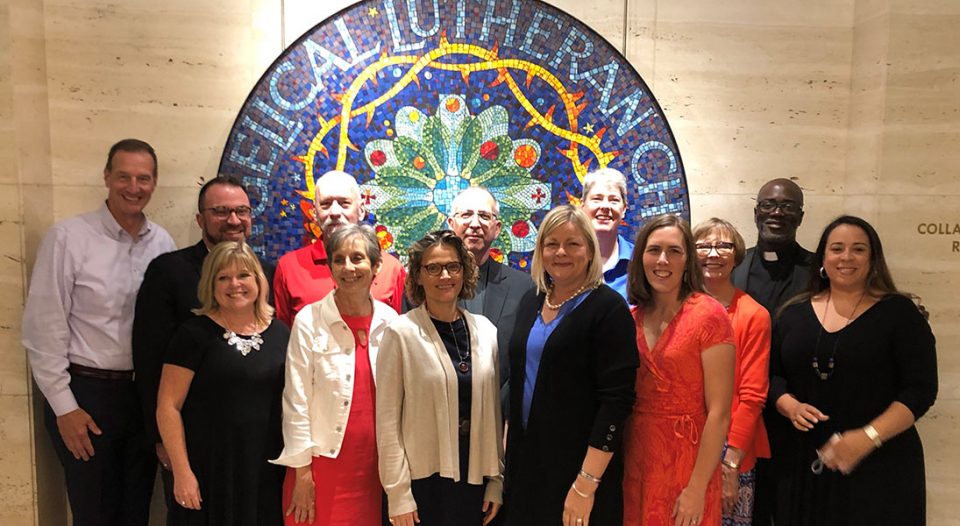 The 2019 new synod bishops are pictured at the ELCA Churchwide Office in Chicago.

Most of the people who founded Lutheran churches in the U.S. hundreds of years ago were white men who’d emigrated from Northern Europe. But the cultural homogeneity that once defined Lutherans in America is belied by this year’s synod elections. To judge from the 13 new bishops, the ELCA is inching closer to the vision of the church painted at Pentecost—people of different backgrounds and identities, speaking unique languages but understanding one another clearly.

The election of eight new women bishops marks a record for the ELCA, surpassing last year’s record of six. One of those new bishops is Leila Ortiz of the Metropolitan Washington, D.C. Synod.

Ortiz, who was born in Puerto Rico and grew up Pentecostal, never expected to become Lutheran, much less a Lutheran bishop. After three years of working in the D.C. Synod office, Ortiz planned to take her name out of the bishop’s election if she were nominated. Later, she decided to let the Holy Spirit decide.

“I left my name in mainly because it was me being faithful to the call and to the invitation, not knowing what the result would be,” Ortiz said. “I’m new to the Lutheran church; I’m new to the synod, and I’m new to rostered ministry. I’m a woman. I’m Latina. I’m young. There were a whole bunch of reasons that I thought, even if I leave my name in, the likelihood is slim to none that I will be elected.”

Like Ortiz, Yehiel Curry, bishop-elect in the Metropolitan Chicago Synod, came to Lutheranism later in life. He was a middle school teacher on the south side of Chicago when a friend invited him to a worship service begun as an after-care follow-up to Safe in My Brother’s Arms (SIMBA), a camp started by ELCA leaders for young African-descent men.

“I wasn’t so much interested in the worship service,” Curry said. “What got me was trying to figure out the camp. I was looking for resources. If there was an opportunity to send kids to camp, I was going to find a way to send my students to that program.”

In 1998, his family ended up joining the ministry, known as Shekinah Chapel. In 2005, Curry became the leader of Shekinah and pursued his Master of Divinity degree at the Lutheran School of Theology at Chicago. In 2012, Shekinah became an official congregation of the ELCA.

Encouragement from family led Kevin Strickland, bishop-elect of the Southeastern Synod, to keep his name on the ballot for bishop.

“It wasn’t until my husband, Robby, said to me: ‘God will not call us to this ministry in vain; if it is supposed to happen, let it happen,’” Strickland said. “Then, I allowed myself to be open to the call of the church.”

After five years serving the ELCA’s churchwide organization as an assistant to the bishop and executive for worship, Strickland found himself called back to the South, where he grew up, attended college and served his first two pastoral calls.

Strickland, the ELCA’s second-youngest bishop-elect after Regina Hassanally of the Southeastern Minnesota Synod, hopes to bring the Lutheran focus on the good news of the gospel to “a more and more polarized world, with more and more people seeking good news.”

He won the election for bishop of the Southeastern Synod over Tiffany Chaney, an African-descent pastor in Alabama.

“I told [Chaney] that night, just for us to stand up here together [as the finalists for bishop], I was speechless,” Strickland said. “Just that would have been enough for me.”

In a time when immigration policy and U.S. treatment of migrants is an important topic in churches across America, one bishop-elect has first-hand experience to share. Constanze Hagmaier, bishop-elect in the South Dakota Synod, emigrated from Germany and brings valuable insight about immigration: its processes, pains, joys, challenges and victories.

“I think especially in times such as these, my firsthand insights can build understanding where there is confusion and misunderstanding,” Hagmaier said.

As the ELCA nears the third decade of the 21st century, change is obviously afoot, amid questions of declining budgets and worship attendance. For some, change may seem scary. To this, Bishop-elect Ortiz replied that, while she and her 12 fellow new bishops-elect promise to bring Spirit-led change and energy, the assembly elected them, and the assembly—the entire body of the ELCA—will lead the church into the future.