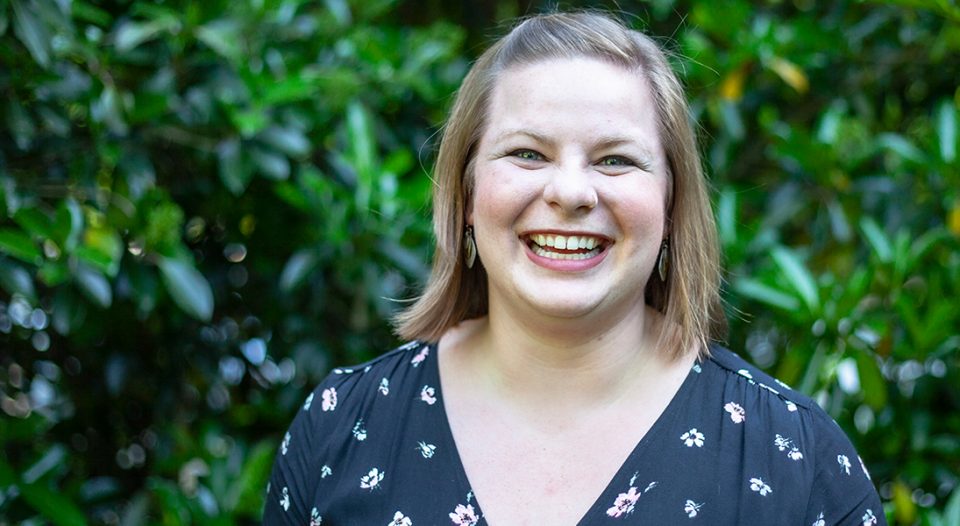 Kendall Vanderslice has a background in professional baking, food studies and theology. In her new book We Will Feast: Rethinking Dinner, Worship, and the Community of God (Eerdmans), she weaves all three threads together. The book is an exploration of dinner churches, but also asks questions about food and how our faith relates to what and how we eat. Whatever your congregation’s relationship with food, We Will Feast will encourage you to think more deeply about it.

Living Lutheran spoke with Vanderslice about the communities she visited for her book, the ELCA’s role in dinner churches gaining popularity, and how she believes this model can provide healing.

Living Lutheran: Could you tell us about We Will Feast?
Vanderslice: The book is a survey of dinner churches in the United States. The dinner church movement, as some people call it, began around 2008, when Emily Scott started St. Lydia’s in Brooklyn, N.Y. From there, several churches [began] worshiping around the table as well. When I first started exploring dinner churches, I was connected with three or four pastors across the country who had all begun worshiping around the table on their own—they described it as a prompting of the Spirit to begin worshiping in this manner. Over time, they began to realize that they were not alone, that there were several other churches doing the same thing. Then those churches kind of became mentor churches to others interested in starting something similar, and this independent collection of people grew from there.

I traveled the country visiting churches that worshiped around the table to write their story, but also to ask the question [of] what happens when we eat together, and how does that change our understanding of the eucharist, of what it means to be in community as a church, and how that impacts our understanding of worship and how God communes with us at the table and as a church.

How do you define “dinner church” for those unfamiliar with the term?
A dinner church, as I defined it, is a church that holds its primary service around the table. So they’ll have their service over the course of a meal, typically directly connecting the meal that they share as a church to the sacrament of communion.

What are some ways more traditional congregations can embrace the gift of eating together as a part of worship?
It’s really easy to see the liturgy of a Sunday morning eucharist as our primary worship, and then community and meals as an add-on to that primary function of the church. But when we look at the early church and the importance of eating together [in] the way that they functioned, when we look at the ministry of Jesus and how it so often took place around the table, when we look at the central sacrament—which is meant to be eating together—and then look at Christ’s call to Peter going forth into his ministry saying “feed my sheep,” we really need to consider eating together and sharing meals as a central part of what it means to be a church community, which we can understand most powerfully when we recognize it as an act of worship. So it doesn’t have to be part of our actual Sunday liturgy, it doesn’t have to be that our church takes place around the table, but meals after church, meals throughout the course of the week, just taking seriously the function of eating together as a part of living as a beloved community.

More than anything, I hope these dinner churches spark conversations in [other] churches about how eating together can transform their worship in new way.

The idea of church being centered around a full meal might be unfamiliar to some people. Would you talk a bit about the history of this practice?
In Scripture, we see it most notably in Acts 2, [when early Christians] gathered in one another’s homes and broke bread and ate together with glad and sincere hearts. We also see this practice of eating together as a church and as eucharist in some early church historian’s records. Tertullian wrote a lot about the practice of eating together and connected it with the Roman fraternities that were happening at the same time. The church was distinctive, because while these other meals were common, culturally, they were gatherings of the elite and known for their excess; Christians gathered together in communities that bridged socioeconomic differences, where everyone ate together and shared communion. They were known not for their excess but for their communion, their care for the poor and their communal sharing.

We Will Feast is also about food on a broader scale and the ways eating relates to faith. How did you find those things to be linked?
I began realizing that my work in food studies was transforming the way that I read Scripture and the ways that I saw food at work in Scripture. What I’m really hoping to reflect in the book is not just that churches are eating together, but that there is something unique to food and God’s choice to use food as this driving theme throughout the story of the gospel and the history of the church. It is both exciting and fascinating, and also very humbling, and should call into question lots of things around how we eat and how communities are formed around the table, and also how communities are broken apart because of our habits around eating. There are huge benefits to worshiping as a dinner church. But more than anything, I hope these dinner churches spark conversations in [other] churches about how eating together can transform their worship in new way.

In the book, you highlight the ways in which eating together is a vulnerable act, and how the vulnerability of eating is coupled with the idea of equality at the table. Would you talk about that?
It’s easy to romanticize what happens around the table and to to talk about meals as though they inevitably bring people together. The reality is that the table is very complex. The table can be a space either to form and deepen relationships or to deepen divides. So part of what I [want] churches to think about is [asking how] we set our tables in such a manner that we orient ourselves toward deepening of relationships and the formation of community, rather than deepening of wounds.

The responsibility of the church is to is to set tables that are spaces of healing of divisions and that subvert cultural divisions, and instead unify the church as a single body that cares for one another’s needs. There’s a profound vulnerability and a profound trust required for the church to do that well. But I think that is the work the church is called to and that is how we take part in establishing the kingdom of heaven on earth today.

The first dinner church that really launched and inspired many others was St. Lydia’s, which is an ELCA church.

How have you seen ELCA congregations embrace dinner church or integrate food into their worship?
The first dinner church that really launched and inspired many others was St. Lydia’s, which is an ELCA church [featured in the book]. When the pastor, Emily Scott, first had this idea of starting a church around the table, she really hadn’t intended to go the ordination track. She had graduated from seminary and did not [initially] think that she was called to the pastorate, and then she felt this prompting to start a dinner church and was looking for a denominational home that would support this work, and the ELCA is the home that she found. So I think the ELCA is really a huge piece of this dinner church practice taking hold.

Another church in the book is Table of Mercy [led by] Pastor Alex Raabe in [Austin,] Texas. He also started a dinner church, and his story is really powerful. It’s a story of church plants (missions)and the impact that even a church death can have. I think, to some, it might seem like, “Oh, here’s an ELCA church plant that failed.” What he sees out of it is actually, “Here is an ELCA church plant that transformed many people who were a part of it in its short life and transformed many people’s relationships to the church.”

What are your hopes for your readers?
I do hope that people leave this book inspired to eat together in new ways, and inspired to see meals through a new lens and to recognize what takes place around the table in a new way.

I also hope that it sparks hope for the church. I was consistently amazed … at the healing that was taking place in these churches and among these pastors. Healing of deep divisions within the church. Healing, within individual churches, of people coming to worship around the table who did not feel welcomed or like they belonged in a traditional Sunday church and experiencing healing in Christian community—but also healing among church denominations that have split and split and split. Worship around the table creates this space to shift conversations and disarm the tension so that conversations can move forward. So, really, I pray that the book sparks hope that there is a way forward in a deeply divided church.

Our need to create and be created