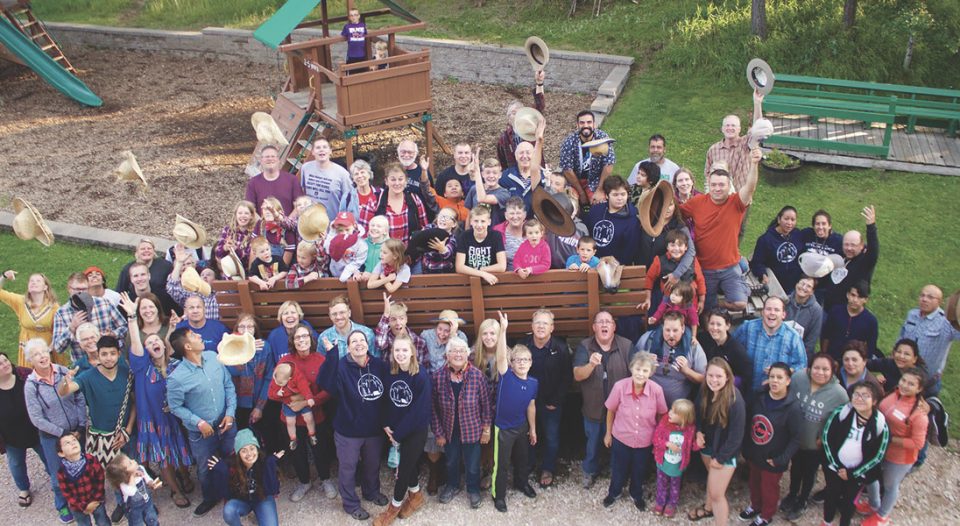 Last summer, during a special week for families at Outlaw Ranch in Custer, S.D., a small group of campers decided to cook tamales for everyone at camp—about 120 people.

The group was from Pueblo de Dios, a Spanish-speaking ELCA congregation from Sioux Falls, and as they prepped their feast late one evening, they sang and danced.

It caught the attention of other campers, who quickly joined the fun.

“They had this assembly line going,” said Karen Kraus, a longtime Outlaw Ranch camper. “I got to see how they soaked the corn husks … it was just so fun.”

Outlaw Ranch was hosting its Connecting Cultures at Camp program, a week that brings together Spanish- and English-speaking families in bilingual prayer, Bible studies and activities.

The authenticity felt during that evening is why it’s a favorite memory of many campers and staff, said counselor Emanuel Herrera Olvera, 25, of Mexico City. “The purpose of that week of camp, of mixed cultures, it [was] happening,” she said. “We had Americans and Mexicans being together and cooking and dancing and having an awesome time at camp.”

When Matt Rusch, director of Outlaw Ranch, first proposed a family camp with mixed cultures, he started from scratch. “We just jumped into this,” he said. “[There was] no model. We [thought], ‘We know God is in the mix, so somehow it will work out.’ ”

The idea was to make family camp look like the church in South Dakota, which is both multilingual and diverse, he said.

The camp partnered with Pueblo de Dios to invite Hispanic families to Outlaw Ranch for Connecting Cultures. In addition to faith-based programming, families would experience hiking, horseback riding and trips to nearby Mount Rushmore and Custer High School for fireworks.

That itself was a blessing, said Maria Cabello, pastor of Pueblo de Dios.

Connecting Cultures also helped some gain confidence. “Especially the kids, [some] speak only Spanish, they feel like a little fish in the ocean,” Cabello said. “But because others were speaking Spanish, they feel more included at camp.”

“Camp is a wonderful equalizer …,” he said. “I ran a YMCA camp in Washington, [where there were] a lot of migrant workers in the fruit fields and vegetable fields and orchards. [Some of those] campers came to camp with a garbage bag of clothes … next to kids whose parents were doctors. And for the most part, they didn’t care. They just want to play. It’s an interesting transition to adulthood where some of that stuff becomes barriers for us.”

Last summer, Rusch saw some of those barriers fade away. Instead of being embarrassed to try to use the Spanish they learned in high school years ago, English-speaking adults utilized the aid of bilingual counselors to converse freely with Hispanic families. And Spanish-speaking adults who had never camped before learned the ropes from English-speaking veterans who had been camping for decades.

“There’s not one of the groups who’s not on unequal footing here, not anyone is not out of their element,” Rusch said. “Camp is fun, it’s messy, it’s loud, it’s crazy, it’s a place where people can get past some of that stuff. Everyone’s out of their home base.

“We all study the same Bible, we worship the same God. We try to address those things instead of the differences at the beginning.”

Connecting Cultures is still a new program for Outlaw Ranch—this summer is the fourth time it’s been offered. But it’s caught the eye of camp leaders nationwide.

Last November, Connecting Cultures received the 2018 Innovative Program Award from Lutheran Outdoor Ministries (LOM) in part because the camp focused on families. “[Outlaw Ranch was] really intentional about not only inviting families who are of Hispanic descent … they were also really open to experiencing the culture of those who were part of the camp and partnering with them on music and food,” said Don Johnson, executive director of LOM.

The tamales, of course, were a great way to connect two cultures. But that evening only came about because Rusch and his team worked hard to find ways to connect with the families from Pueblo de Dios, including tapping into their international staff and finding bilingual resource leaders who were excited to present in both languages.

“[The] first year we did [Connecting Cultures] … it went well, but it was not really what we had envisioned. We had a language barrier,” Rusch said. “Now, four years later, we have our staff that are translating actively while adult Bible study is going on, we have many more staff who can interact with folks whose first language is Spanish.”

Stephanie Espinoza and her husband, Jorge, both pastors from Minnesota, led a very immersive, bilingual Bible study, and Larry and Karol Baer—musicians who already had a working relationship with Pueblo de Dios—taught songs in both languages. The fun times even led to a group of 10- to 12-year-olds writing their own hit single: “I Am So Hungry for Tamales.”

“You can see how American people want to sing in Spanish, too, so we taught them, and it was a great mix of voices,” Olvera said. “It was pretty cool.”

Outlaw Ranch also received the LOM award because it has the potential to become a nationwide model, Johnson said.

“It doesn’t necessarily have to be Spanish/English,” Rusch said. “There are other congregations that we can engage with once we feel we’ve perfected this and can continue the model with a congregation that speaks or comes from ‘X’ country around the world. … We just want to make this more available.”

Relationships formed through this type of program can continue beyond camp. Not long ago, Kraus reconnected with a member of Pueblo de Dios whom she’d met at Connecting Cultures. “[She and I] knew each other from Outlaw, and there’s just that friendliness that we had a little conversation in the grocery store, because you know it’s a safe person,” she said.

These are the bridges the program continues to build.

“You just have to show up [at camp], and it will enrich your life,” Kraus said. “And that’s what it’s done. It’s enriched my life.”