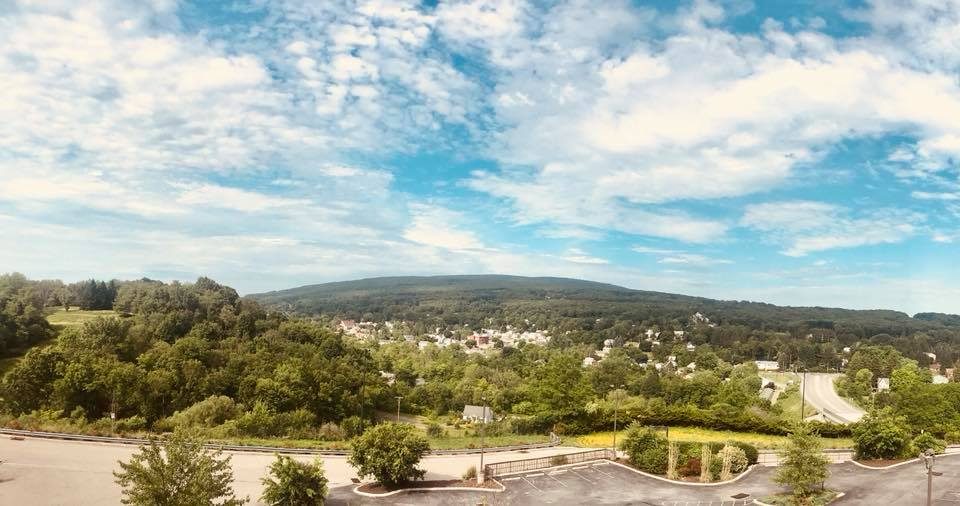 Part of Angela Denker's research for her book took her to Altoona, Pa., situated amid the vast Appalachian Mountain Range. Photo: Angela Denker

I’d spent most of my time with Southern Baptists and Pentecostals by the time I was ready to visit Appalachia and central Pennsylvania, bound for the fabled green hills that became ground zero for the 2016 presidential election.

Particularly in Pennsylvania—a battleground, traditionally blue state—politics had gotten dicey. Articles had been written ad nauseam about the “forgotten people” of the Rust Belt, the opioid epidemic, poverty and racism.

But not much had been written about the religious faiths of this area’s people. And in north Appalachia, central Pennsylvania and Ohio, many of these voters were Lutheran. As I continued my research for my book, Red State Christians: Understanding the Voters Who Elected Donald Trump, I knew I’d be talking with my fellow Lutherans, for a change. But I didn’t know what to expect.

As I drove from Pittsburgh toward the deep hollows and green mountains, I called Amanda McCaffery, whom I knew from a clergy Facebook group and who was, at that time, serving a congregation part-time while awaiting first call and ordination. “We’ll see you soon,” she said, promising to meet me with her husband, Drew McCaffery, pastor of Bethany Lutheran Church in Altoona, Pa., at the local restaurant, Eat’n Park.

Up until this point in 2018, I’d already done research trips to Washington, D.C.; Florida; Houston; New York City; and El Paso, Texas. (I had trips to Dallas, rural Missouri, California and New Hampshire still ahead.)

I’d learned in this research that America is vastly complex, beautiful and in pain, thriving and suffering—and that people everywhere had struggles. Appalachians and Rust Belters were much like the rest of Americans but with a higher rate of opioid overdose and with lower wages, cost of living and life expectancy.

Central Pennsylvania was once a bastion of German-speaking Lutherans. The McCafferys told me about how entrenched poverty had settled in their land, both here, where they served as pastors, and also where they’d grown up—Amanda on Appalachia’s eastern edge in Hagerstown, Md., and Drew on its western cusp in Ironton, Ohio. Amanda said that some Pennsylvania Lutherans believe bishops diluted the power of Appalachia by carving central Pennsylvania into a number of small synods.

Amanda and Drew are probably slightly more progressive than the members they served, but their Appalachian roots meant they were trusted and loved in a world that can be unfriendly to outsiders.

They told me about coming home one night to learn their neighbor had been hospitalized for a drug overdose, about children who had to live with grandparents due to addicted parents or parents with irregular work hours, about the difficulty of finding any kind of job in small-town Appalachia, even relatively urban Altoona.

I heard about a certain sense of Appalachian and Rust Belt despair, the kind Americans have read about in magazines and newspapers for years now. In some impoverished corners of Altoona, I could sense it—in the lawyer who told me about all the young adults who were signing up for disability checks and addicted to pain pills, in the grandparents who were working physical-labor jobs with no hope of retirement, in the boarded-up houses one could buy for under $70,000.

Still, I left Altoona feeling richer than when I’d come—feeling assured that the voters on which American politics had so often hinged were not driven primarily by fear, anger, hatred or a misplaced sense of superior morality. And they weren’t Christian Nationalists. Their patriotism, rather, was rooted in the strong tradition of military service in the region.

I left feeling assured by the genuine friendship I’d built with Amanda and Drew—two Lutheran pastors serving in an area where it’s difficult to earn a living, build a congregation and not get bogged down in a sense of hopelessness. Amanda and Drew, and the love they share for their churches, provide a sense of hope.

In a fragmented America, I learned that hope is best found not in places where it’s easy to hope but in places (and in churches) where hope is seen against a backdrop of death. This kind of hope—the kind formed by Jesus and preached by Amanda and Drew in central Pennsylvania and Appalachia—is the kind of hope that endures.

In all my travels across America, telling stories of Christians and Christian leaders in red counties from New Hampshire to El Paso, it’s this one that gives me hope for the future of the Lutheran church—a future rooted in survival, humility and love against all odds.

Writer’s note: As I researched Red State Christians, I was indebted, as well, to other Lutherans across the country who opened their homes and churches to me. In the book you’ll read about guns and Christianity from ELCA pastors in rural Iowa, Minnesota and New Hampshire. You’ll meet farm families in Missouri from the congregation of Stephen Zeller and his wife, pastor and writer Kimberly Knowle-Zeller. You’ll meet Rose Mary Sánchez-Guzmán, pastor of Iglesia Luterana Cristo Rey, who ministers to migrants at the U.S.-Mexico border in El Paso and who took me with her family into Juarez, teaching me how to cross the divides that have broken the heart of America’s churches.