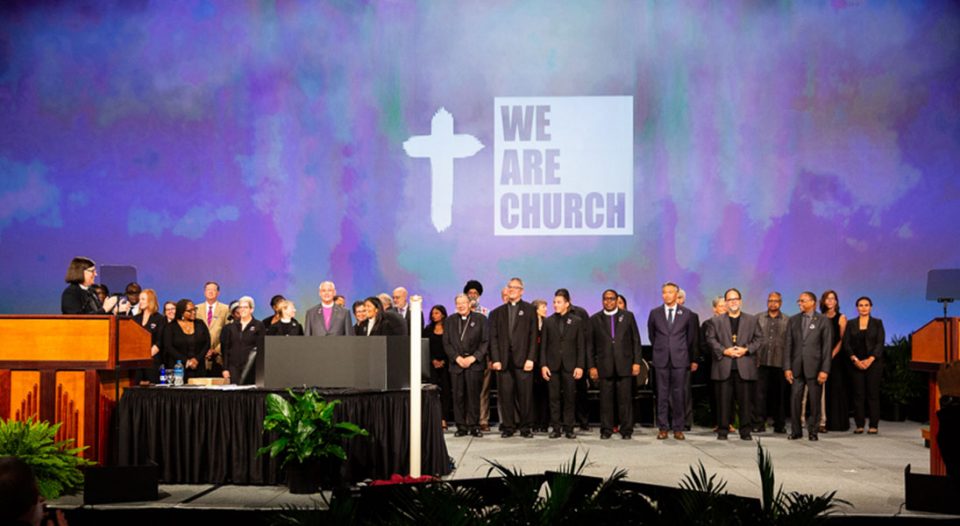 With all of the ELCA’s ecumenical and interreligious partners represented on stage, the assembly members voted to adopt (829-23) “A Declaration of Inter-religious Commitment,” which will now stand as policy for the church’s relations. Credit: Will Nunnally

The policy statement contains 12 commitments the church will hold in common to guide work and use as a measure of accountability to inter-religious partners.

The call for an official statement first came in 1991. At the 2016 ELCA Churchwide Assembly, Presiding Bishop Elizabeth Eaton announced her appointment of a task force to create the draft. In an introduction before the vote, she said, “In a time marked by unprecedented extremism, as well as unprecedented inter-religious peacebuilding, affirming this church’s vision for—and commitment to—inter-religious relations is itself an act of Christian witness.”

An amendment that expressed concern about parts of the document being “inconsistent with God’s word” was defeated by both the ad hoc committee and assembly.

Several people spoke in favor of the declaration, including Emily Shipman, a pastor in the Western North Dakota Synod. She told of her internship experience in Malaysia and the hospitality she received there from people who practice other religions.

In an earlier hearing on the statement, Wayne Miller, then bishop of the Metropolitan Chicago Synod, thanked the task force for its work: “[This document] is a profound witness of who we are as ELCA Lutherans. In an urban metro context like ours, this is invaluable. It’s so important to have a tool like this to cut through dangerous misunderstanding that goes on.”

In addressing questions about evangelism during the plenary session, Patricia Lull, bishop of the St. Paul Area Synod and chair of the task force, said it is a “both/and” document—both a reflection of the Great Commission and the Great Commandment. “We have a scriptural basis for doing two things and doing them at the same time,” she said. “We are to invite others into life in Christ, and we are to respect and serve all our neighbors.”