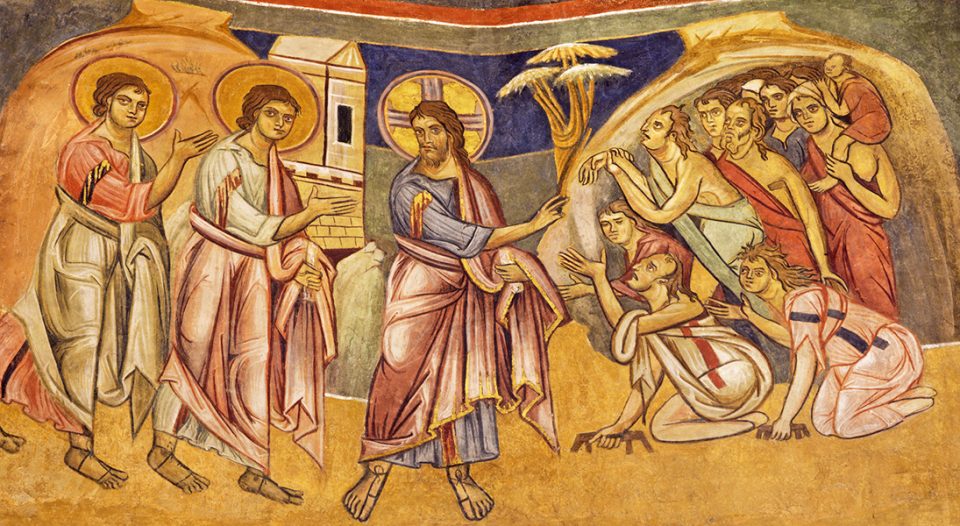 A fresco of Jesus healing the 10 lepers probably by Grisopolo from the 13th century.

It seems like, in every moment, humans are especially divided. I think about the division in the second decade of the 21st century, and then I think back to the 1960s, and the 1940s and the 1890s and the 1600s. There has hardly been a time when humans have enjoyed peace, inclusion and tranquility. Into the shuffling madness of division and exclusion comes Jesus, who gives the gift of his own sacrificial love to all of humanity and eventually to all of creation (Romans 8:19-23).

This week, Luke’s Gospel gives us an especially clear picture of Jesus, who embraces those on other sides of divisions of gender, (dis)ability, ethnicity and even religion.

In the story of the “10 lepers,” as my Bible translation titles this section, it’s important to begin with a close reading of the language. Luke is careful to say these are leprous men (λεπροὶ ἄνδρες) rather than lepers. Similarly, Luke speaks of a human who was paralyzed, rather than a paralytic (Luke 5:18) and a man possessed by demons, rather than a demoniac (Luke 8:27). These characters are introduced in the Gospel specifically to point out how Jesus has the power to heal and free them, but their humanity is kept front and center in the Greek text, even if not in the English translation. 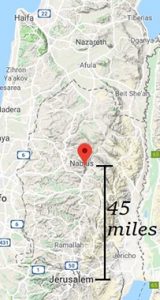 These 10 leperous men form a strange sort of alternative community. In the borderlands between Galilee and Samaria (Luke 17:11), Jesus encountered a mixed group of Jews and Samaritans who were suffering from the same disease. We know from Scriptures that Jews and Samaritans generally didn’t get along well. But in both second temple Judaism and Samaritanism, people with leprosy faced differing levels of social/ritual exclusion, so those who had skin diseases seem to have found community with those whom they would have shunned had they not faced restrictions in normal society.

As Jesus passed by, these Jews and Samaritans started yelling loudly and asking for mercy (Luke 17:13). They stood at a distance, knowing that Jesus was probably headed toward Jerusalem—they didn’t want to make him ritually impure before a potential temple visit. Confounding their expectations about who was going to the temple, Jesus told them that they should go to the priests (Luke 17:14). Just like when Jesus healed a person with leprosy earlier in Luke (5:14), he commanded the 10 to go to a priest to be certified for re-inclusion into society, as per the instructions in Leviticus 13. Jesus recognized that social healing after ostracism is as important as physical healing from disease.

While the 10 men were on the way, their skin was healed. One of their number, a Samaritan, returned to give thanks to Jesus. On the most basic level, this isn’t surprising. In the temple, Samaritans weren’t allowed to go beyond the court of the gentiles. The Greek word that Luke uses to translate Jesus’ word for “foreigner”—ἀλλογενὴς—is the same used on an inscription that warned gentiles not to enter too deeply into the temple on pain of death (I saw the inscription in the Museum of the Ancient Orient in Istanbul).

Even though the Samaritan temple on Mount Gerizim had been destroyed generations before Jesus’ advent, the Samaritan might have gone to see a Samaritan priest who still worked there. Jesus allowed for this when he pointedly said to this mixed ethno-religious group: “Go show yourselves to the priests” (plural). I suspect that the Samaritan saw that he was healed, showed himself to his priest and then returned to Jesus. Mount Gerizim is about 45 miles closer to Galilee than Jerusalem is, so if the healed men were all to walk to their respective priests and back to Jesus, the formerly leperous Samaritan man would have a 90-mile shorter round trip. Whether or not the Samaritan went to his holy mountain or not, he did return and praise God.

By recognizing that the Samaritan was truly praising God and had saving faith (the root of the verb that the Samaritan’s faith performs in Luke 17:19 is σῴζω—“to save”), Jesus honors the faith, religiosity and gratitude of the Samaritan. Jesus did not, however, ignore religious, ethnic and national differences. Even as he was clear that his earthly mission was to the lost sheep of Israel (Matthew 15:24), Jesus was also clear that after his resurrection, his disciples should reach out to all the world, across every human boundary and difference, to baptize and make disciples (Matthew 28:19-20).

We are Jesus’ disciples when we follow his example of crossing human boundaries and obey his commands to do the same.