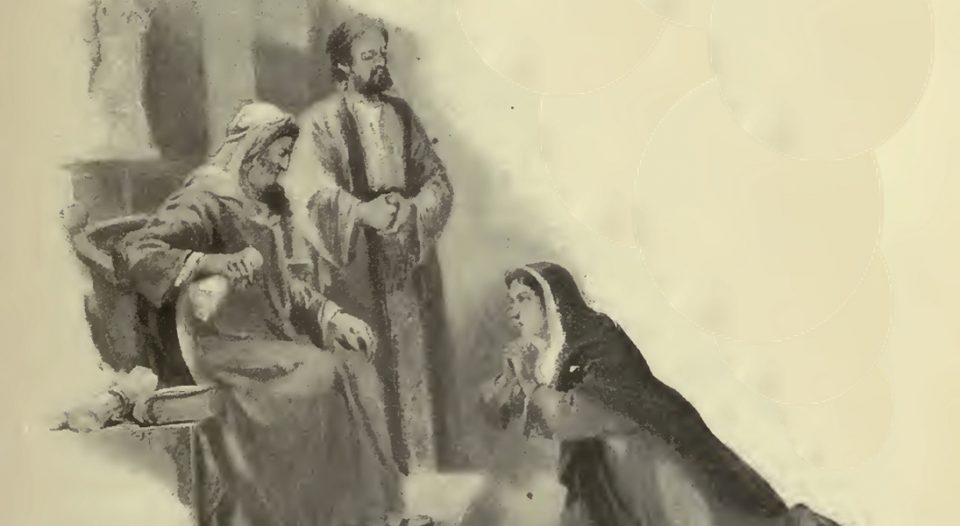 "And there was a widow in that city, and she came unto him saying "Avenge me of mine adversary." Anonymous artists by Pacific Press Publishing Company, 1900

I feel that among Christians the law gets a bad rap—especially among Protestant Christians, and maybe most especially Lutheran Christians (with our insistence on trying to differentiate between law and gospel). God’s laws are righteous and perfect (Deuteronomy 4:8, James 1:25). Jesus didn’t come to abolish law, but to do all of it (Matthew 5:17), and he commands those who follow him to do the same (Matthew 5:18-19). So for this week, and this week only, let’s pause and celebrate law, specifically because the giving of God’s law is good news.

Before we begin the celebration of law though, let me offer three brief caveats. First, as a good Lutheran Christian, let me say that the law and obedience to it have no power to save. Jesus’ gracious salvific death and resurrection alone save us from sin and death. What I’m considering in the following paragraphs is what is commonly referred to in Protestant circles as the “third use of the law.” After God has claimed us, the Spirit empowers us to honor God and love our neighbors through imperfect obedience to God’s law. Obedience to God’s law doesn’t save us, but it helps our neighbor and honors God.

Second, at no time in Scripture is a non-Jew commanded to follow all of Jewish law. But gentiles can choose to follow parts of Jewish law. For example, those non-Jews who wanted to eat the Passover meal with the Israelites had to be circumcised, but those who didn’t want to eat it didn’t have to be (Exodus 12:44-45). Converts, as Jews, obviously undertake the commandments. But Scripture is consistent and clear that Jewish law is just that: God’s laws for Jews.

Third, just because the majority of laws in Scripture aren’t aimed at gentiles, that doesn’t mean there aren’t laws specifically targeted to us. Acts 15 tells all the believers, Jew and gentile alike, that we are all saved by the grace of Jesus (11), and there are certain things we should all do in light of that reality.

Jesus contrasts those who look to God to enact justice with those who intimidate their way through an already corrupt system, saying that the faith(fulness) of the former must exceed the tenacity of the latter.

Now let’s turn to this week’s texts. The prophet Jeremiah testifies that God looks forward to placing God’s law within humans—it will be written on human hearts (Jeremiah 31:33). God recalled how, even when acting like a spouse to the Holy Community and leading the Israelites by the hand, the law had somehow been external to them since they had come out of Egypt. The internalizing of God’s good law, God’s promises, will cause a radical concretizing of the relationship between God and humans. Finally, the Lord proclaimed: “I will be their God, and they shall be my people” (Jeremiah 31:33). Everyone in the community, from the least to the greatest, will know the Lord personally and intimately, and they won’t need a spiritual hierarchy where someone tells another about God (31:34). Scripture proclaims that internalizing God’s law by having it written on our hearts brings about a radical equality among humans at the same time that it allows for new intimacy with God.

This week’s psalm proclaims that meditating on God’s laws has secular benefits as well. The psalmist wrote that studying God’s law makes one wiser than adversaries, teachers and even elders (Psalm 119:98-100). God’s law also provides a prophylactic effect, keeping those who study it from falling into evil (101).

Paul, in his letter to Timothy, points out that every Scripture from God is useful for, among other things, training in righteousness (2 Timothy 3:16). This is, after all, the purpose of law in Scripture—to help train up God’s people for righteousness. Enacting what we read in Scripture—and certainly the passages that Paul talked about contained ample sections on law—equips those who belong to God to perform every good work (3:17).

In this week’s Gospel reading, Jesus describes a situation in which no one follows the law and how bad it is for everyone. A certain judge neither feared God nor respected humans (Luke 18:2, 4). In that same city, a widow called for the punishment of the one whom she felt had wronged her (Luke 18:3), using the verb Ἐκδίκησόν, which properly means retributive justice or vengeance. But the judge wouldn’t take up her case. What finally convinced him to grant her vengeance was fear. Translators often read what the judge said about the woman as a metaphor for her wearing him out, but he literally is afraid that she will give him a black eye (ὑπωπιάζῃ is a term in Greek boxing, meaning to hit under the eye and leave a mark). A corrupt judge is forced into action by fear of bodily violence.

I’ve been guilty of teaching this passage as if a sweet old widow was being denied her pension check by an evil judge, but that interpretation undermines what Jesus was really saying. He used a lawless situation to put in stark contrast how God behaves with God’s people. If a human widow can physically threaten an evil human judge into acting out vengeance on her behalf, how much more will God hurry to answer the requests (again, for vengeance) of God’s chosen ones, who are persistent like the widow, if less violent (Luke 18:7). Jesus contrasts those who look to God to enact justice with those who intimidate their way through an already corrupt system, saying that the faith(fulness) of the former must exceed the tenacity of the latter.

Again, God’s law, as good and perfect as it is, has no power to save. But we are not to neglect it for this reason. Instead, through gratitude to God, relying on Jesus’ death and resurrection and guided by the Spirit, we attempt to honor God and love our neighbor by practicing God’s laws.