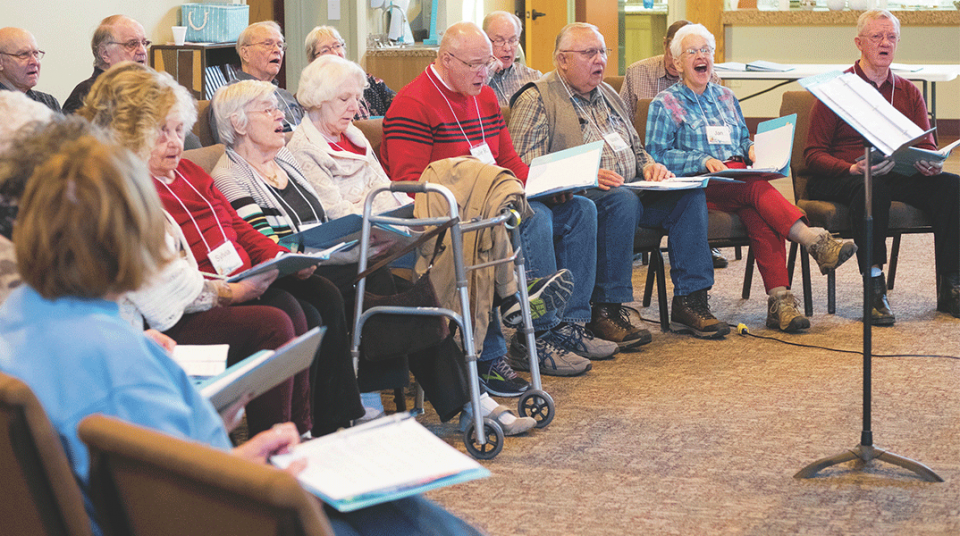 “The Unforgettables” is a choir formed out of the Memory Café at Calvary Lutheran in Grand Forks, N.D. This café site focuses its programming on eliminating stigma associated with Alzheimer’s disease. Photo: Courtesy of Mary Ann Devig

Tom McCann and his wife, Kathleen, who lives with Alzheimer’s disease, were still able to dance together every once in a while before her health declined.

They would take to the floor at a Memory Café hosted by Good Shepherd Lutheran Church in Raleigh, N.C., where they’re members. “My wife loves to dance,” he said. “We did our best Philly bandstand dances.”

For people living with Alzheimer’s disease or dementia and their loved ones, Memory Café is a place where they can relax and socialize without judgment. It’s also where caregivers can catch a glimpse of the person their loved ones were before they were affected by illness.

“It allows me to reflect back and say, ‘Yes. That part of her that loved music and dancing is still there,’ ” Tom McCann said. “The fun part of her is still there even if, with dementia, you don’t get to see that on a day-to-day basis.”

Memory Cafés are free and held at sites across the nation, including Lutheran churches. They provide social engagement, support and education for people living with Alzheimer’s disease and other dementias, and their caregivers.

The programs vary at each site, but many offer activities designed to keep the brain stimulated and the body healthy. These may include scrapbooking, dancing, field trips, listening to music or playing games.

Good Shepherd’s monthly café attracts about 50 guests for hors d’oeuvres and dinner, followed by a singalong or music performed by an entertainer.

Gail Vaughn, a founder of the café, decided to focus on music because she noticed that her mother, who had Alzheimer’s, reacted well to it. “It got to the point where she couldn’t process how to walk to the table,” she said. “But my dad would say, ‘Let’s dance to the table,’ and she would.”

Another Memory Café at Calvary Lutheran Church in Grand Forks, N.D., focused on dispelling stigmas about Alzheimer’s after Mary Ann Devig, the parish nurse, noticed that many people didn’t want to talk about the illness.

“People were coming into my office and telling me about their spouse or parent who had Alzheimer’s,” she said. “But they didn’t want anyone else to know.”

Devig decided the café should emphasize socialization and education. She has invited researchers, neurologists, representatives of long-term care facilities and other experts to speak to the group. She also lends out books and educational DVDs.

“The fun part of her is still there even if, with dementia, you don’t get to see that on a day-to-day basis.”

Not long after establishing the monthly café, Devig saw evidence that people were getting support from it. “Within three months they were coming early and staying late because they had found people they could talk to,” she said. “It helps diminish the stigma and helps people to realize they’re not the only one dealing with this situation.”

The café usually attracts 40 to 80 people, and other church members often lend a hand. “When I say I need six dozen cookies for a certain day, people show up with cookies,” Devig said. “I have more cookies than I need.”

The café has even led to the formation of a choir dubbed “The Unforgettables,” which features 43 voices. Participants range in age from the 50s to 90s.

David Wilder, a retired pastor who leads the congregation’s senior ministries, spearheads the café and believes the need for it will grow because Alzheimer’s and dementia are more likely to affect people as they age. Fourteen years ago, the largest group of congregants at St. Luke besides children were ages 50 to 65. Today, the largest group is 60 to 75.

“I was seeing dementia show up when I was making my pastoral calls, so we started talking about having a café,” Wilder said, adding that it fits perfectly with the church’s mission to provide care.

The cafés at St. Luke’s, Good Shepherd and Calvary are open to people of all denominations, and Devig said the priority is to just share love and care.

That caring has been crucial to helping Tom McCann cope with his wife’s illness. “It provides you with a safe place where you can be yourself and there is no judgment,” he said. “It gives you that little time out with other people.”