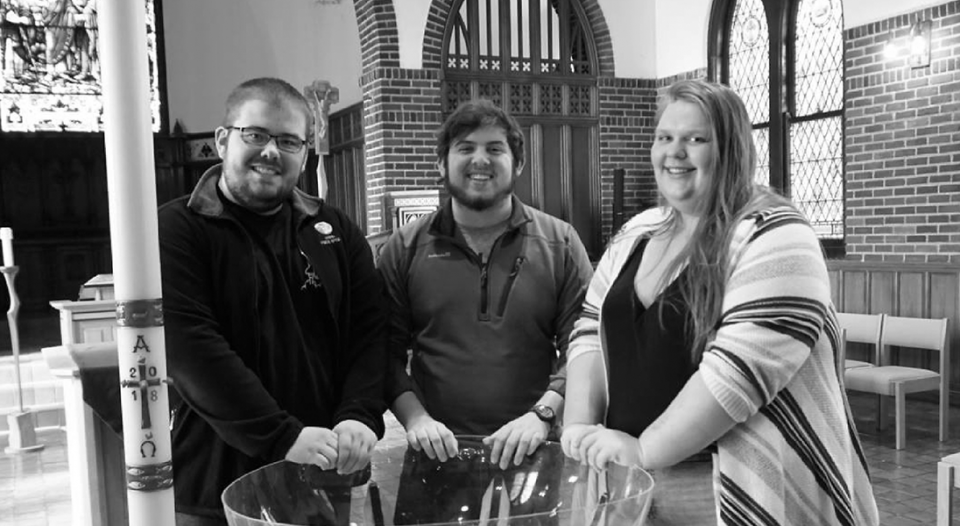 Jared McLey (left), Robert Casey and Amber Boettcher are students in the first-year group of the integrated program through Wartburg College and Wartburg Theological Seminary that shortens the number of years in school on the path to ordained ministry in the ELCA.

Answering God’s call to ordained ministry sets a person on a long road that includes college, seminary and a year of internship in a congregation. This usually takes eight years.

That road is now shorter—and less expensive—because of a new partnership between Wartburg College in Waverly, Iowa, and Wartburg Theological Seminary in Dubuque, Iowa. Through their integrated Bachelor of Arts/Master of Divinity program, pastoral candidates attend college for the first three years. During those years, students can choose from numerous majors, not just religion.

Next they are assigned to congregations for contextual learning for three years. Living on a stipend from the congregation and working under trained supervisors, they take college and seminary courses via videoconferencing. The arrangement allows them to see instantly how what they’re learning relates to their parish work.

After six years, candidates will receive both their B.A. and M.Div.

The plan not only provides candidates a faster road to their first calls but also cuts the cost of that route.

A nearly $500,000 grant from the Kern Family Foundation in Wisconsin, which has funded similar programs for other denominations, is helping with the startup. Augsburg University, Minneapolis, also recently received a foundation grant to develop a similar program with Luther Seminary in St. Paul, Minn.

With not only the foundation grant but also other scholarships for college students, the cost of earning the two degrees could be very low.

This route to ministry isn’t for everyone. Students who enter the integrated program already feel certain about a call to ministry, whereas some future pastors aren’t sure about their call until well into their college years or later.

Amber Boettcher from Fridley, Minn., was sure about her call. She wasn’t active in church until she was in the fifth or sixth grade, but when she got there, she said, “something just felt right.”

“I remember first deciding to go into ministry while sitting in my pastor’s office,” she added. “When going around as to what we wanted to do after high school, instead of saying ‘nurse’ or ‘chef’ like I thought I wanted, ‘seminary’ came out of my mouth instead.”

Now in her second year at Wartburg College, she said the integrated program is what drew her attention to the school in the first place. Meeting people there reinforced her decision. The timing of the program, she said, “allows you to get out to what you love to do quicker but also be surrounded by people who support you.”

Boettcher and others in the program receive pastoral “formation” while in college, said Kristin Wendland, assistant professor of religion at the college and adviser for students in the program. Knowing these students are headed for ordination as pastors, the college, seminary and synods help them discern the nature of their call and their qualifications.

Wendland, formerly a pastor in the La Crosse Area Synod, said, “I remember being on internship and wondering, ‘What did I learn that works here?’ ” In the integrated program, students are involved in academic and practical work at the same time, connecting the learning to the parishes they serve.

Being assigned to a parish after three years in college gives one an early, intensive exposure to the pastoral calling, and graduates enter their first calls with three times the parish experience of traditional M.Div. graduates.

The religion curriculum parallels the ones for both the college and the seminary degrees, but it was streamlined so that some classes count for both degrees.

A positive byproduct of the integrated program is the students’ service to parishes, some of which may need more help but don’t wish to call an assistant pastor.

The integrated program at a glance

For more information, go to wartburgseminary.edu/integratedprogram.

Theological education in the ELCA