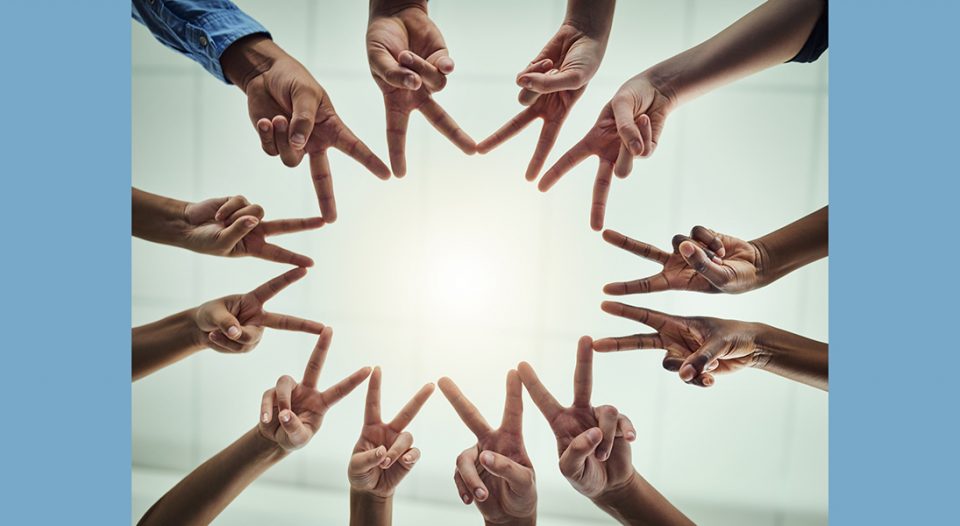 As a relatively new Lutheran Christian, I didn’t grow up with all the self-deprecating Lutheran jokes. I’m coming to understand that Jell-O salad is a frequent topic of such jokes. Another theme is about unspoken, but intense resentment. One of the most striking jokes I’ve heard recently is: “What do you get when you put 10 Lutherans on a congregation council?” Answer: “One decision, two new congregational feuds, and 10 Minnesota-nice smiles.” It seems like whenever humans assemble, the opportunity to work cooperatively is only matched by the potential for disagreement and rancor.

The theme of this week’s lectionary readings focuses on God’s power to gather people for peace. In this time of family and community gatherings, this is a message we need.

The words of the prophet Isaiah foretell of a new leader to come from the house of David. Out of the stump of Jesse’s family tree—cut down, figuratively, by the Babylonian exile—will spring forth a new shoot (Isaiah 11:1). He will be wise and righteous. In fact, he will provide righteous judgment for the poor and equity for the meek (11:4). Rather than the military might of conquering empires, his weapon—if we can call it that—will be his mouth that speaks wisdom and fear of the Lord (11:2-5). His coming will usher in an era of peace that will reverse even natural hostilities between predator and prey.

Isaiah says the coming of the king will undo the curses that the serpent and humans would be enemies, which were made during the expulsion from the garden (Genesis 3:15). In addition to causing animals to live together in peace, the shoot from Jesse’s tree will draw all people to himself as a source of wisdom and counsel (Isaiah 11:10). God will then gather all God’s people from all the places that they had gone into exile—from the north, east to the Two Rivers, deep into Africa and the Mediterranean coastlands (Isaiah 11:11). In short, God will gather God’s people to dwell together in a supernatural peace.

The Psalmist continues the theme of a righteous king who will judge and bring peace. The writer longs for a king who will give justice to the poor and deliverance to the needy (Psalm 72:2, 4). The psalmist wishes that in the days of the coming king, that righteousness and peace will flourish until the moon is no more (Psalm 72:7).

Scripture is clear that God has always intended to gather together all kinds of humans to increase peace in this world.

Even Paul echoes the theme of gathering people for peace in his letter to the Romans. He prays for those who will hear the reading of his letter that God will allow them to live in peace and harmony with each other (Romans 15:5). Paul quotes a number of verses from the Hebrew Bible, including a Septuagint version of Isaiah 11:10 (quoted above), that all prophesy that God (especially the shoot of Jesse—Jesus) was always looking forward to gathering the gentiles into God’s people.

Looking to the Gospel lesson, I take encouragement from a tiny detail in the introduction to John’s outburst against the Pharisees and Sadducees (Matthew 3:7-10). The text says: “Then the people of Jerusalem and all Judea were going out to him, and all the region along the Jordan, and they were baptized by him in the river Jordan, confessing their sins” (Matthew 3:5-6). The people of Jerusalem and even all of Judea going to hear John’s message and be baptized makes sense to me. In a time of tumult and uncertainly, flocking to a charismatic religious leader who calls for repentance and a return to pious living makes as much sense as anything else.

I’m most intrigued by the Gospel writer’s inclusion of the people from “all the region along the Jordan.” Presumably he was addressing the people in the province of Perea, which was directly across the Jordan River from Judea (and Samaria to the north). Many of the people of Perea were descendants of those who had been forcibly converted to Judaism a couple generations earlier by the Hasmonaean king, Alexander Janneus. Despite the questionable nature of a conversion under duress, John doesn’t target his fiery warnings against the people from along the Jordan, but rather against the Pharisees and Sadducees coming from the environs of Jerusalem. To all the people who gathered around him, whether descendants of Israelites for several generations or those of forced-converts, John had the same message: produce fruit worthy of repentance (Matthew 3:8). Not least of the fruits that God’s Spirit ingrains in us as we repent from the acts of the flesh is peace (Galatians 5:22-23).

Once again, God’s Spirit, acting this time through John the Baptizer, gathers people together for peace.

I love when the lectionary readings highlight how a particular action or passion of God occurs throughout Scripture. From the Psalmist hoping for a wise and righteous king to Isaiah’s prophesy of the coming messianic king who will gather together people for peace. Then Paul urges the recently ingathered gentile and Jewish believers to live peacefully together. Finally, John the Baptizer gathered together Jews with different ethnicities, pasts and origins and urged them all to produce fruit worthy of the coming reign of God. Scripture is clear that God has always intended to gather together all kinds of humans to increase peace in this world. Let us work toward that goal as we follow Jesus, the Prince of Peace.