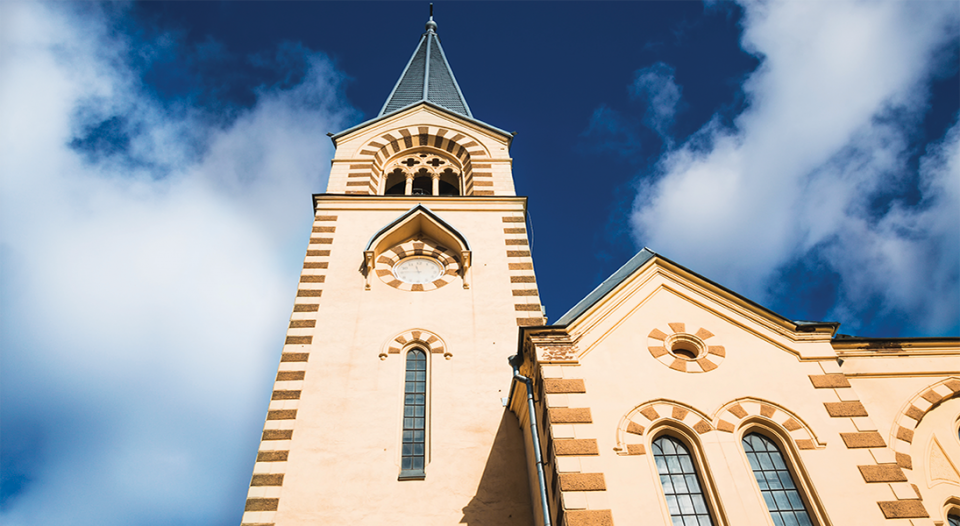 It might seem odd for a church that is hundreds of years old to feel like a new, budding faith, but that is the reality for those who belong to the Evangelical Lutheran Church in Russia (ELCR), a religious minority in a country that is all but officially Russian Orthodox.

One of them is Artis Petersons, pastor of the diaconal ministry at St. Peter and St. Paul Cathedral in Moscow.

He recently went back to his hometown in Latvia and found some were anxious about his sermons that had been posted on YouTube, as he typically tries to tie in relevant problems in Russian society: corruption, limits of freedom or empty propaganda.

It’s not that Russians are still living under atheist communism—though many who grew up under Soviet rule still fear those memories. It’s more that Lutheranism—with its message of the gospel, the inclusion of sermons in a Lutheran service and more—still feels new to many who enter a Lutheran church in Russia.

“Lutheranism is for Russians … a fresh air of freedom,” Petersons said.

Elena Bondarenko, dean of the Central Deanery, administrator of foreign relations and coordinator of women’s ministry at the cathedral, said, “When we’re asked about our life in the Lutheran church in Russia, at once our ministers start talking about problems, and there are really a lot of problems and challenges.

“But … there is a joy too. … After the Soviet Union … a lot of Germans and even Latvians and Estonians, they were converted to the Orthodox faith. … If they wanted to baptize children or wanted to get married in church, more often they went to the Orthodox church because in the Soviet times, in each big city, there remained one Orthodox church. So they remained there; they did not return to the Lutheran church anymore. But we have Lutherans in spite of this fact, and we have many young people who are very interested in Lutheran faith. … That is why it is also our joy.”

Today Russia is technically a lay state, but it’s no secret that Orthodox members retain certain privileges within the government, while other religions can be treated harshly.

Lutherans have a federal right to witness their faith freely, but many hide their beliefs at work, while others are prohibited by corporations’ ethical codes to witness openly, Petersons said.

While people usually associate Russia as an Orthodox country, Bondarenko said the Lutheran church has existed in the country since the 16th century when German merchants and officers went there for work. Lutheranism thrived in Russia for a long time—it was even recognized as the second state church before 1917, with Orthodox being the first.

But that changed in 1917 after the Russian Revolution brought about the rise of the atheist communist party in the Soviet Union.

“The Lutheran church … stopped to exist after the revolution in 1917 because all religion was prohibited,” Bondarenko said. “Ninety percent of priests and pastors of all confessions were executed; a lot of Lutherans were deported later on, and church stopped existing.”

After World War II, the Lutheran community struggled with the Nazi stigma associated with its German roots. And since most Russian Lutherans were ethnic Germans, they migrated in large groups back to Germany after the Berlin Wall came down—entire Lutheran congregations disappeared.

Still, when the Soviet Union fell in 1991 and religion was again allowed in Russia, it was German Lutherans who helped rebuild the ELCR.

“Even in the ’90s, the majority of pastors were from Germany, mainly pensioners because they finished their ministry in Germany,” Bondarenko said. “And since we didn’t have pastors, they agreed to come and to continue their work in Russia. And they helped to restore our church.”

In the last 20 to 30 years, the demographics of Lutheranism have shifted to include more Russian-born people instead of ethnic Germans. And the majority of new Russian pastors are Russian-speaking, not German-speaking—a first in church history—having graduated from the Lutheran Theological Seminary in Novosaratovka, a suburb of St. Petersburg.

Despite the changes and challenges facing the ELCR, the church is succeeding because of good leadership and the courage of its members, said Viking Dietrich, ELCA regional representative for Europe, the Middle East and North Africa.

“The people of the ELCR, today, [are] becoming more Russian and the members come from diverse experiences of communism and from different parts of Russia,” he said. “The message of the church is making sense to them and giving them a spiritual and moral compass with which to navigate a changing and complex world. There are many young people in the church, many families, and a hopeful mood that one can feel when visiting.”

And the Lutheran church has been incredibly welcoming to the changing demographics in Moscow, said Marie Anne Sliwinski, ELCA program director for disaster response and sustainable development. “The church has a blend of traditions of Lutheran service and openness to welcoming diverse members who are simply eager to find a space to express their faith and practice,” she said.

Freed from pain and shame