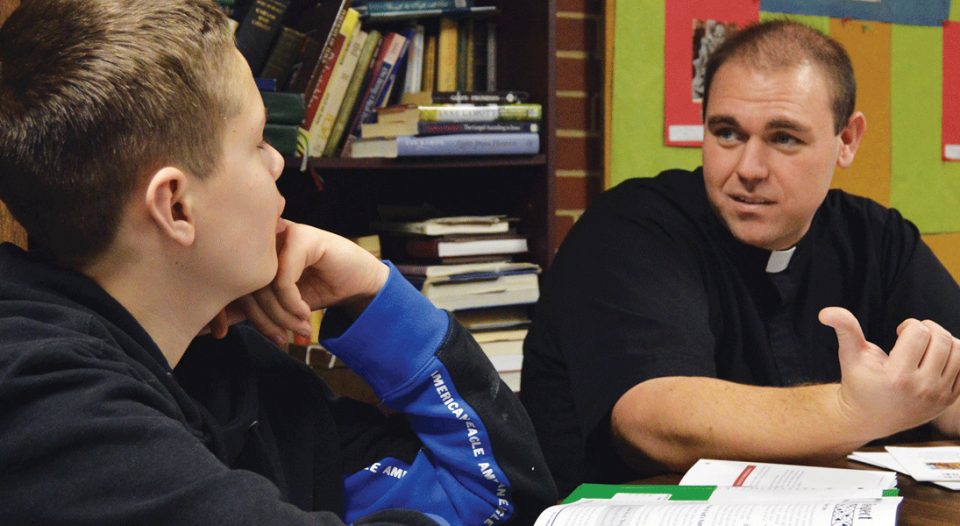 Chaplain Tony Setley talks with a confirmation student at St. Paul Lutheran Church in Morgantown, W.Va., about Luther.House and the Lutheran understanding of vocation.

A venerable space at West Virginia University (WVU) is being repurposed to help develop the next generation of church leaders and alleviate the financial burden on young people considering church vocations.

“Luther.House,” a three-story, six-bedroom brick house across the street from the WVU library on the Morgantown campus, will become a rent-free home for prospective pastors and deacons in fall 2020.

Originally the house served as a parsonage for St. Paul Lutheran Church. After the congregation moved to a new location, 2 miles away, in the 1960s, the church building was razed. The house was used as a student center until Christ the King Chapel was erected next to it as a Lutheran campus ministry space. More recently, the house operated as a rental property, sometimes for students interested in campus ministry.

Now the plan is for Luther.House to be a discernment home base for students—as many as six at a time—to explore a call to any vocation that requires advanced theological education.

The new Luther.House initiative is a partnership with Wartburg Theological Seminary in Dubuque, Iowa, and will operate under the direction of Tony Setley, chaplain for WVU’s Lutheran campus ministry since 2017.

“This is a way for us to be involved in that conversation of, ‘What will you do with the rest of your life?’ in a way that will not only benefit you but the greater church, as well.”

Setley understands the value in a discernment home. A 2015 graduate of the Lutheran Theological Seminary at Gettysburg (now United Lutheran Seminary), he played football at Lebanon Valley College in Annville, Pa., from which he earned a political science degree in 2008. As a teenager, Setley said, he had thought about becoming a pastor, but while in college he “didn’t really feel like [he] had an avenue to it,” hence the seven-year gap between graduations.

“Every rostered minister is called to raise up new leaders,” said Setley, who worked as a political fundraiser before entering seminary. “But the general approach has been, ‘Great, you feel called. Go get a degree, get involved with a congregation [and] then come talk to us later.’

“Most of the freshmen coming into college here know exactly what they want to do,” he said. “WVU engineering, for example, talks to every fifth grader in the state about the STEM fields, and the church has been getting left out by not being able to present some kind of option. This is a way for us to be involved in that conversation of, ‘What will you do with the rest of your life?’ in a way that will not only benefit you but the greater church, as well.”

Setley is also a chaplain in the Pennsylvania National Guard, and an additional goal of the Luther.House initiative is to bolster the declining number of ELCA clergy serving as federal chaplains for the armed forces, Veterans Affairs hospitals and correctional institutions.

Christopher Otten, assistant to the presiding bishop and director for federal chaplaincies, said that in the late 1980s about 600 served the church’s mission in federal chaplaincy. By the turn of the century, that number had dropped to 400. Now it’s down to 180.

“The robust education of ELCA pastors, in college programs like Luther.House as well as seminary education and parish formation, has been critical in providing federal chaplains to our U.S. Department of Defense and other national agencies,” Otten said. “Chaplain Setley represents the larger mission of his synod and our church, both in campus ministry at Luther.House and in the National Guard. He is a prime example of a pastor and chaplain who is identifying and developing the next generation of servant leaders.”

“If someone decides after one or two years that the ministry is not for them, that’s a success too.”

Matthew Riegel, bishop of the West Virginia-Western Maryland Synod, was chaplain at WVU from 2000 to 2015. He said Setley has “a good vision and plenty of drive” as he brings the Luther.House project to life.

“Luther.House will provide a place where students can have those intentional conversations with others thinking of doing the same thing with their lives,” Riegel said. “They’ll have opportunities to be immersed in the worship life and the intellectual life of the church. And if someone decides after one or two years that the ministry is not for them, that’s a success too. You’re deciding if this is right or wrong for you, and either way is the right answer.”

Throughout their time in Luther.House, students will undertake leadership roles in the chapel and participate in faith formation programs. They will also have opportunities to visit the Wartburg campus and network with students and faculty there.

“First and foremost, the students at Luther.House will be here to get their bachelor’s degree, and they can major in whatever they want,” Setley said.

He stressed that the program isn’t intended to “steal away anyone’s college years, to deprive anyone of rich experiences,” but rather to supplement those experiences, providing space for growth and discernment.

Otten said, “Luther.House will plant seeds of service in the lives of college students and challenge them to consider their place in the life and mission of the church.