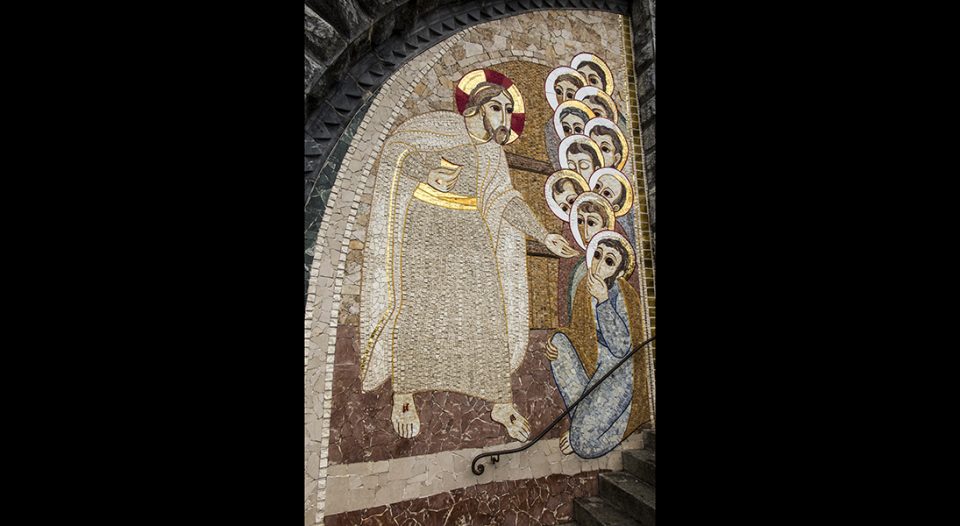 Lourdes, France: Mosaic of the studio of Marko Rupnik on the wall in front of the entrance to the Rosary Basilica in Lourdes.

Anyone who has been reading this column for a while knows I am passionate about our creedal confession that we believe in the resurrection of the body. When we affirm those words with the universal church across time and space, we aren’t only talking about Jesus’ bodily resurrection, but our own as well. God does not give up on God’s good creation. Instead, God loves to redeem, restore and re-create. We know God to be a creator and restorer of that creation.

Because of who we know God to be, I advocate for looking to Jesus as the great pioneer (Hebrews 2:10, 12:2), whose resurrected and glorified body leads to the new creation. Jesus blazes a trail for us to the other side of sin and death—and urges us to follow. I appreciate that the lectionary texts for this week all point to our hope for our bodily resurrection.

In his speech to the multiethnic Jews who had gathered in Jerusalem for the Jewish festival of Shavuot/Pentecost, Peter proclaimed that God freed Jesus from death because it was impossible for death to hold on to him (Acts 2:24). It is important to remember that one of the reasons for celebrating Pentecost was that it marked the culmination of the harvest when the wheat was gathered in from the fields. The Bible uses other names for Pentecost, such as the “Festival of Harvesting” and “Festival of First Fruits” (Exodus 23:16, Numbers 28:26). The significance of Peter preaching about God raising Jesus up from the tomb during this festival celebrating the fullness of the harvest from the earth would not have been lost on those present.

To make the point explicit on how God had raised up Jesus’ body from the grave as a sort of first fruits of the dead (1 Corinthians 15:20), Peter quotes the Septuagint’s Psalm 16, saying:

Therefore my heart is glad and my tongue rejoices;
my body also will rest in hope,
because you will not abandon me to the realm of the dead,
you will not let your holy one see decay (Acts 2:26-27; New International Version).

Peter argued that David must have been prophesying about Jesus, whose bodily resurrection he had witnessed. Jesus has come back from the dead and will lead others with him.

Seeing his maimed, but nevertheless, living body, the disciples rejoiced because they knew Jesus was their risen Lord.

Some six weeks and a few days earlier, before Peter was preaching to thousands in Jerusalem crowded with Pentecost pilgrims, he was hiding out in Jerusalem, which was crowded with Passover pilgrims. Jesus had been executed a few days prior by the Romans. Peter and the disciples were hiding out in a locked house because they feared a few members of the Jewish religious elite who had turned their master over to the Romans. It should be said that the Gospel of John has a legacy of hurtful interpretation toward Jews. Suffice to say that, while they were hiding out “for fear of the Jews,” all of Jesus’ disciples, all the witnesses to his resurrection, and all those who buried and mourned him were Jews, in addition to Jesus himself. We need to be careful to read the nuance in the John’s Gospel, and not forget that our Messiah is a Jew.

And it was the body of this murdered Jew that came and stood among the disciples, without bothering to open the locked doors. Jesus, according to the Gospel, demonstrated it was him by showing them his hands and his side (John 20:20). Seeing his maimed, but nevertheless, living body, the disciples rejoiced because they knew Jesus was their risen Lord. Jesus breathed the air out of his working, living lungs and told the disciples to receive the Spirit (John 20:22). Poor Thomas gets a bad rap for doubting, but he only asked for the same sign that Jesus gave the other disciples without them having to ask: interacting with Jesus’ physical body (John 20:25). Jesus grants Thomas’ request, and again, allows himself to be touched.

One of my great hopes is looking forward to the resurrection and the new heavens and new earth. We will be resurrected and transfigured into bodies that work, that do not break down, that do not attack themselves, and do not get the flu, the coronavirus or cancer. As we continue to celebrate Jesus’ resurrection, I look forward to the resurrection of Cory and to us all. Jesus does more than come back from the dead. He is the pioneer and first fruits of a harvest from the dead that God will surely raise up.