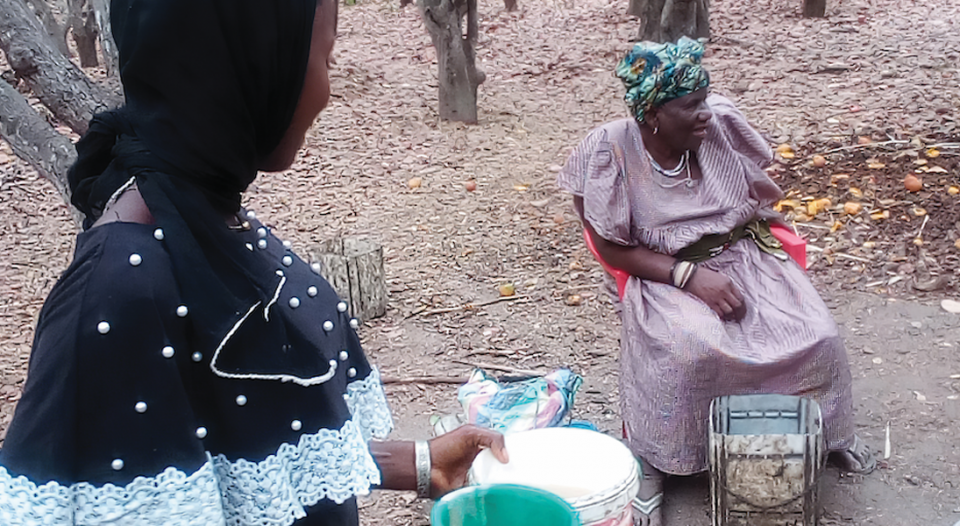 In Gambia, a small country in West Africa, many women depend on subsistence agriculture for survival and regularly face periods when their food supply is scarce. Unexpected events—from crop failure to illness to natural disaster—can mean a dangerous drop in family income. For families with children, this can be especially harrowing.

Marie Mendy, a grandmother and Christian from the village of Sifoe, knows this challenge well. Her income used to depend on her cashew farm. When the farm didn’t produce much, Mendy knew she needed a more reliable source of income.

In 2018, the church stepped in. Seeing the community’s need, the Evangelical Lutheran Church in The Gambia (ELCTG), supported by ELCA World Hunger, trained Mendy and 79 other women to process and market cashews.

Once the leaders, mostly men, realized that the project focused on empowering women, all but one of them rescinded their donations.

This project is part of the ELCTG’s Women Empowerment Strategy of the Church in Society, which works for gender equality in Gambia. Through its projects, the church encourages women to be self-reliant, economically independent, confident in facing difficult situations and active in sociopolitical development of their communities and country, said Fatima Bass Thomas, director of the ELCTG women’s ministry.

Before the project could start, the church needed a space for the women to cultivate and process cashews together as a cooperative. The ELCTG approached community leaders about donating land, and many agreed to help. But once the leaders, mostly men, realized that the project focused on empowering women, Thomas said, all but one of the landowners rescinded their donations. With less land than hoped for, the project looked as if it might stall.

But the women didn’t give up. They boosted their collective harvest from their personal land by combining the raw cashew yields from their personal farms with cashews bought from other farmers. They then “raised funds to buy the [donated land] and planted the cashews there to sustain the future of the project as a permanent cash flow source for women in the future,” Thomas noted.

Since then the women have been selling nuts and using the other parts of the cashew tree, including the fruit, to make things such as juice, jam, soap and a kind of fertilizer. Many of these items can be made with dried cashews, so the work isn’t limited to the harvesting season and the items can be sold throughout the year.

This shift helped Mendy earn a steady income to feed her family and pay for her grandchildren’s school fees, clothing and medical care.

One of the women, Katumu Smart, works six days per week collecting cashews for project participants. On the seventh day, she collects fruit to sell for her family. Smart said the work enables her to fund her children’s education too.

On top of providing women with consistent livelihoods, the project also trained them in business and marketing skills.

In 2019, the church expanded its program to six more communities and trained 350 women. Working together, these women are growing a brighter future for their families and communities. ELCTG leaders report their work will be felt for generations to come.

Hunger is a women’s issue

ELCA World Hunger works in more than 60 countries, including the United States, on water and sanitation; education and training; agriculture and nutrition; income and savings; health; peace, justice and human rights; and advocacy and community organizing (elca.org/hunger).

Hunger and poverty disproportionately impact women. The United Nations Entity for Gender Equality and the Empowerment of Women says women around the world suffer economic disadvantages because they lack their own income, control of assets and/or decision-making power in their families; lack access to education; and suffer from unequal division of unpaid labor, including child care. Additionally, divorce and death of a spouse affect women more negatively than men. ELCA companions around the world accompany women through these challenges.

“Women are underrepresented in places of power in nearly all areas all around the world, but we know that working to achieve gender justice has incredibly positive effects,” said Rebecca Duerst, ELCA director for diakonia. “When women are recognized as the force they are, economies grow, communities become stronger and outcomes in many areas improve.”

Walking toward one another, cultivating understanding

Turning away Jesus at the door