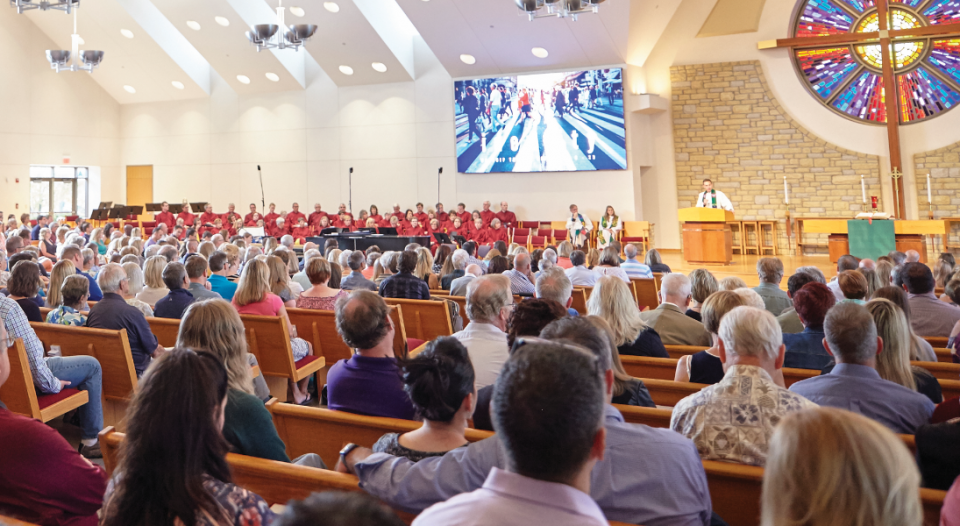 A Twin Cities-area congregation has used a powerful financial lever to improve the lives of hundreds of families while drawing attention to a societal problem: the crushing weight of hospital and doctor bills.

A partnership between Lord of Life Lutheran Church and a New York-based nonprofit has already resulted in the forgiveness of medical debts in excess of $1.5 million.

What made it happen was $15,000 in donations from worshipers at the Maple Grove, Minn., congregation—which means that each dollar collected wiped out more than $100 in debt.

“It’s a creative way to address an underserved need. The math is what drives this story, in a way,” said Joel Wight Hoogheem, a pastor of Lord of Life.

The prayers of member Skip Lieser served as the ignition switch. “I always pray, ‘Show me some things you want me to do,’” he said. “I was driving one day in Maple Grove, clicking through radio stations, and I heard a story about a Kansas church that had just forgiven $3-4 million in medical debt for pennies on the dollar. I thought, ‘Is this for real, or just another scam?’”

Lieser, who had acquired considerable fiscal acumen during a 35-year career with General Mills, dove into that question. He extensively researched the nonprofit behind the debt forgiveness, RIP Medical Debt, even developing a relationship with co-founder Craig Antico, a former executive in the debt-collection sector.

Satisfied that RIP and its model—using donations such as church offerings to buy medical debt for the sole purpose of giving relief to debtors—were rock solid, Lieser brought the idea of a partnership to Hoogheem.

“I had no idea how the secondary debt market worked, but I trust Skip, and he did an incredible job with the due diligence, so I knew this was legitimate,” Hoogheem said. “As ELCA Christians, we are committed to demonstrating compassionate mercy and liberating hope. … This is charity work, of course, but it’s an effective way to raise up the bigger justice issue of why such debt exists in the first place.”

“As ELCA Christians, we are committed to demonstrating compassionate mercy and liberating hope.”

An act of faith

Antico and co-founder Jerry Ashton started RIP Medical Debt in 2014. Purchasing in bulk from medical debt buyers at less than 1% of face value, the organization has been able to retire more than $1 billion in debt, affecting more than 500,000 families.

“Those expenses don’t result from things that people go out seeking,” Lieser said. “No one chooses to have cancer or a car accident. With our partnership with RIP Medical Debt, we’re able to address the situation where it is right now, helping those people, while also helping to raise the question ‘What can we do at the beginning so bills aren’t so high?’”

Hoogheem notes that the people most impacted by medical debt are vulnerable populations—those in poverty, older adults, veterans. “Those sorts of folks among us who we think Jesus calls us to serve,” he said.

In all, 472 families in Texas and Arkansas, where Lord of Life had recently sent mission teams, benefited from the congregation’s inaugural debt-relief effort.

“We have not been contacted by any recipients of the relief we provided—and I have absolutely no expectation for any of them to do so,” Hoogheem said. “The gift is truly without strings attached.”

RIP Medical Debt, Lieser added, rarely hears from any of the people it has helped, mostly because of the shame people feel over not having been able to square their accounts.

“All of us would love to hear from some of the families that had debt forgiven,” he said. “I would love to remind them that they are part of the family of God and [that] we help each other in times of need. But the important thing is that the debt is forgiven and these families can move on with their lives.”

Lord of Life will continue to emphasize the RIP partnership in 2020, including in its children, youth and family summer programming. The congregation will likely also advocate for legislation to facilitate the purchase of debt by nonprofits such as RIP.

Hoogheem said the RIP partnership is a good reminder to “continue to be open to the new opportunities the Holy Spirit brings,” pointing out that roughly two-thirds of bankruptcies in the United States result from medical bills.

“I really think it is important to continually pray and ask God how we can be part of spreading his gospel,” Lieser said. “He will answer, maybe in subtle ways, but then comes our act of faith. Are we willing to listen, consider a plan and then act on his response?”


Debt from unpaid or uninsured medical bills causes thousands of people to spend their life savings, jeopardize their retirement, go into poverty or declare bankruptcy. Sometimes all of the above! Some congregations are helping by buying uncollected medical debt for pennies on the dollar and wiping out the obligation. This is a wonderful ministry, but wouldn’t it be great if the health care system didn’t drive people into debt in the first place?