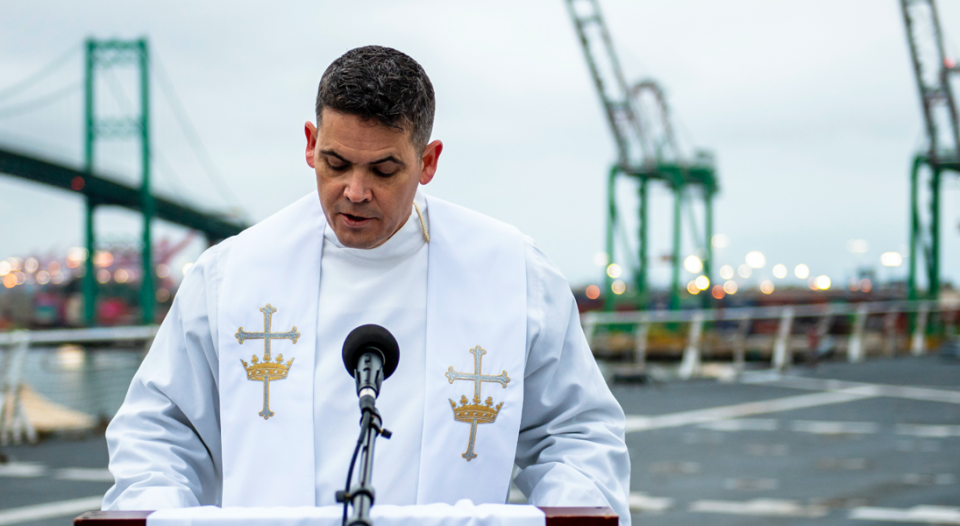 ELCA Chaplain Glenn Orris delivers remarks during the Easter sunrise service from the flight deck of the hospital ship USNS Mercy off the coast of Los Angeles. Mercy served as a referral hospital for non-COVID-19 patients currently admitted to shore-based hospitals.

Lt. Cmdr. Glenn Orris had a moment’s notice to report as chaplain to the USNS Mercy, the Navy hospital ship whose mission was to help hospitals overwhelmed by COVID-19 patients in Los Angeles.

Orris ministered to the ship’s approximately 1,000 personnel and counseled patients who requested a visit. As of April 17, the ship housed 52 patients who didn’t have COVID-19 but suffered from other ailments such as pneumonia, heart failure and kidney diseases. Orris, whose regular ministry was to sailors in a destroyer squadron, now found himself caring for caregivers.

He was inspired by the immediate ecumenism on the USNS Mercy, which included chaplains from varied faith backgrounds. They offered diverse worship opportunities, including Holy Week, Easter and Passover services. Seeing Buddhists, Muslims, members of the Church of Jesus Christ of Latter-day Saints and others meditating and praying together in their own traditions moved Orris.

But what struck him most was the way “God was at work through the incredible spirit and dedication that these people brought to their mission,” he said. “[The crew was] asked to dislocate from other parts of the country, some on short notice, bring very little with them, to board a ship, many of whom had never been on a ship. Their spirits, attitude and commitment was indomitable.”

Orris is one of 180 military chaplains bringing hope, healing, spiritual care and encouragement to Veterans Affairs hospitals and prisons, and to the U.S. military worldwide, said Christopher Otten, ELCA director of federal chaplaincies.

“It was only after 9/11 that I even considered becoming a Navy chaplain. I was 38, which is as old as you can be to join, and thought I’d serve my country.”

He began his ministry in 1997 as a parish pastor in Chicago, then applied to be a chaplain in response to a Department of Defense call recruiting clergy. “It was only after 9/11 that I even considered becoming a Navy chaplain,” he said. “I always thought of myself as a parish pastor. But I was 38, which is as old as you can be to join, and thought I’d serve my country.”

A few weeks after applying, he interviewed at the Pentagon and was assigned to the USS Nimitz in 2004. When people are doing what they’re called to do and have a purpose, they feel God’s peace, Orris said.

Lt. Davis Anderson, public affairs officer on the USNS Mercy, agreed: “We’re here to see patients and that’s what we’re doing. We’re demonstrating the power of Navy medicine on behalf of our country. We’re fulfilling our promise. We’re all content.”

Orris is grateful for the prayers and support from ELCA congregations, adding that the church “educated me, raised me in the faith and prepared me for this moment.”

For another story of chaplain ministry during the pandemic, see “Chaplain on the front lines: Anthony Stephens.”

Five thoughts on faithful parenting during the coronavirus pandemic