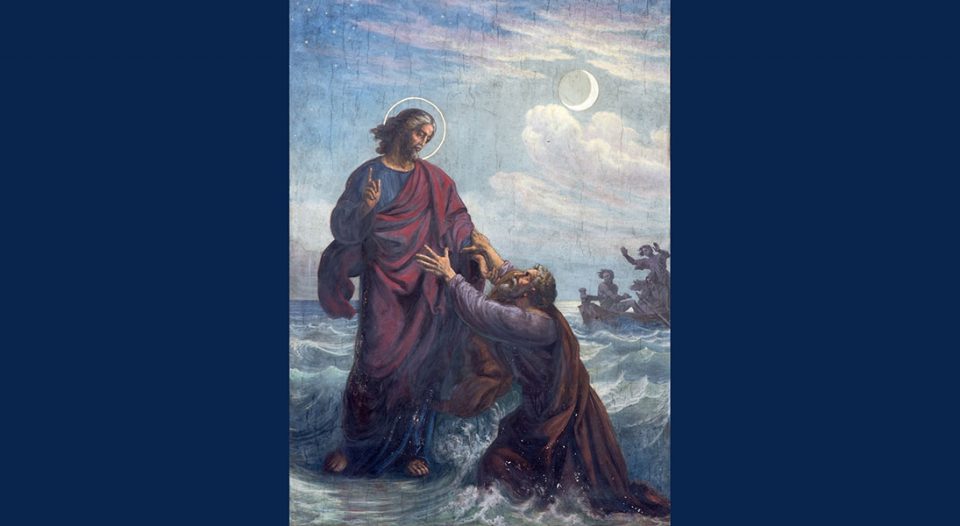 Fresco of drowned Peter and Jesus in Altlerchenfelder church in Vienna from 19th century.

There are times to be loud with our faith: loving God and our neighbor by showing up, loving through our words and deeds, and living out our baptismal calling into active citizenship in the kingdom of heaven. At other times, what is needed is to relax and enter God’s restful quiet.

This week’s reading from the Hebrew Bible tells of Elijah’s resignation as a prophet. After God’s stunning victory over baal’s prophets, the Israelites went back to the worship of their true God en masse (1 Kings 18:16-40). But Israel’s queen, who was a devotee of baal and asherah, was furious and threatened Elijah’s life (1 Kings 19:2). So he ran away and hid in a cave, presumably preparing to die. God spoke to him, but Elijah only complained. Then God told Elijah to leave the cave because God was going to pass by (11). But the prophet pointedly did not come out of the cave. A fearsome wind, an earthquake and a fire all passed by, but God was not in any of them.

Then Elijah heard a קֹול דְּמָמָה דַקָּֽה. This Hebrew phrase is famously tricky to translate. The King James Version renders it as a “still, small voice,” while our New Revised Standard Version uses “a sound of sheer silence.” God speaks quietly and gently to the prophet, who is at the end of his rope. Hearing this, Elijah wrapped his garment around his head so he could neither see nor hear God anymore and went to the entrance to the cave, not wanting to leave it entirely (13). Elijah quit his prophetic role and refused to fulfill any of the three last tasks that God had given him (he was told to anoint his successor, Elisha, but simply threw his cloak on the boy without slowing down as he walked by 16, 19). Even amid Elijah’s prophetic burnout, it was the sheer silence that attracted the reluctant prophet to emerge from the cave and see what God might be doing.

Jesus, of course, saved Peter. But then another, much bigger, miracle in the passage is usually ignored. When Jesus dumped Peter in the boat and then climbed in himself, the wind suddenly stopped.

After Jesus’ miracle of feeding well over 5,000 people, he instructed his disciples to collect baskets of leftovers—one for each of them (Matthew 14:20)—and then immediately compelled them onto a boat (22). As fishermen, the disciples could read the worsening weather as well as anyone. If Jesus hadn’t ordered them, they would not have gotten on that boat. In the darkening sky, they set out to cross the sea, probably hugging as closely to the land as possible.

Jesus then dismissed the crowd so he could finally have some silent, alone time to pray and mourn over the news of his relative’s murder that he had received just hours earlier (22, 23, 12). Jesus prayed in solitude while the weather worsened.

Meanwhile, the disciples were probably grateful that they had their snack baskets to give them energy as they struggled to row against the waves smashing into their boat. By the fourth watch (between 3 a.m. and dawn), they had been washed out to the middle of the sea (24-25). A parallel account in John (6:19) said they had rowed 3 or 4 miles in the adverse seas. The men were exhausted and ready to collapse after a night of straining against the oars, but for all their effort, they were farther from shore than they had been at any point in the night. Suddenly, they saw Jesus walking across the same waves that were battering their boat, as easily as if he had been jaunting across a field of stones.

We all know the story of Peter calling to join Jesus on the water, and how he did for a bit, but then, distracted by the sound of the wind, he sank (Matthew 14:29-30). I wonder if Peter was just so tired from struggling at the oars against the waves that he would do anything, even chance sinking, to get out of that boat. Jesus, of course, saved him. But then another, much bigger, miracle in the passage is usually ignored. When Jesus dumped Peter in the boat and then climbed in himself, the wind suddenly stopped (32). The roaring wind that had stirred up the lake and prevented the men from getting where they were going suddenly stopped. The sudden silence must have been deafening. It was at this moment, in the sheer silence, that the rest of the disciples worshiped Jesus as God’s son (33).

God’s power and love are frequently demonstrated by action, especially through the actions and words of the church, Jesus’ body on earth. But now and then we see God’s power and love through a quiet, or even silent, calm. This quiet allows us to turn and praise God who gives us quiet among the storms, earthquakes and fires of our lives. I don’t know about you all, but I am praying for a brief rest in God’s silent calm.