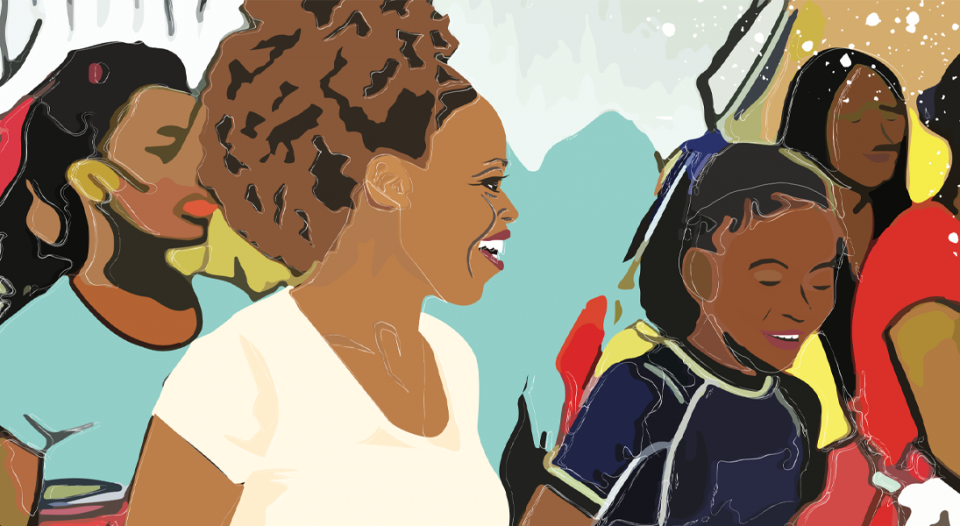 Women from Mountain of God Evangelical International Church, Baltimore, dance and sing in this illustration made from a photo taken during a worship service.

When God spoke to him, Jean Paul Kisuku knew he had to listen.

A pastor in his native Congo, Kisuku had spent years ministering through prayer groups to his fellow Congolese and neighbors in nearby Uganda. After immigrating to the United States and settling in Maryland, he stepped away from ministry to focus on secular work to support his family.

But God had other plans.

“God is moving you to do his work, and if you say, ‘yes,’ you will be OK,” said Kisuku of the calling he felt to return to the ministry.

Kisuku and his family were resettled by Lutheran Immigration and Refugee Service and Christ Lutheran Church, Baltimore. Seeing how the congregation welcomed newcomers, Kisuku reached out to Amsalu Geleta, then a pastor of the congregation, and volunteered to conduct a prayer service there in Swahili, the native language of Congo.

“He gathered five families for the first day in October 2016,” said Geleta, who now serves as executive assistant to the bishop and director for evangelical mission in the Delaware-Maryland Synod. “We provided the space, and he started from that. He’s a wonderful evangelist, and he reached out to many people who speak Swahili, French, Lingala or English—new arrivals, most of them. And soon they filled their congregation, and it’s still growing.”

That small prayer service has evolved to become Mountain of God Evangelical International Church, a new congregation bolstered by grants that were funded by Mission Support, the offerings that congregations share with synods and the churchwide organization.

Much of that growth can be attributed to Kisuku’s determination to bring God’s word to as many people as possible. Many of the African immigrants in and around Baltimore didn’t have transportation, so Kisuku began driving to their homes, bringing them to and from church each week.

Seeing his efforts, Christ Lutheran—which hosted Mountain of God’s services—helped Kisuku acquire a minivan to transport congregants. And a year ago, Salem Lutheran Church in nearby Cantonsville, Md., purchased a 25-passenger van to transport his parishioners, some of whom travel more than 25 miles to attend services.

“It’s the spirit of evangelism to the church that revives us all.”

In less than four years, Kisuku has built the congregation’s numbers to over 150 people hailing from several African countries. The congregation has begun to take a more active role in the synod as well. In addition to raising Mission Support funds through their weekly offering, the congregation’s choir performs at area churches and synod events.

Geleta said the growth of Mountain of God has been inspiring for the synod, seeing multiple churches step up to support this new congregation and its mission to bring God to new people. “How can one ministry by itself be born or stand by itself?” he asked. “With the participation of everyone, it helps plant and nurture it to make it grow. And it’s the spirit of evangelism to the church that revives us all.”

Kisuku is grateful to all those in the synod who have helped make his ministry such a success. But above all, he’s thankful to God for calling and believing in him, even when he didn’t believe in himself.

“I say thanks for God—it’s not just me who did that,” he said. “That’s from God—he knows me for my name, and that I can do that. I didn’t know I could, but he did.”

A version of this story originally appeared in Stories of Faith in Action 2020-21. This annual publication highlights how a portion of your offering, called Mission Support, advances the ministry of the ELCA. To learn more, visit ELCA.org/SOFIA.