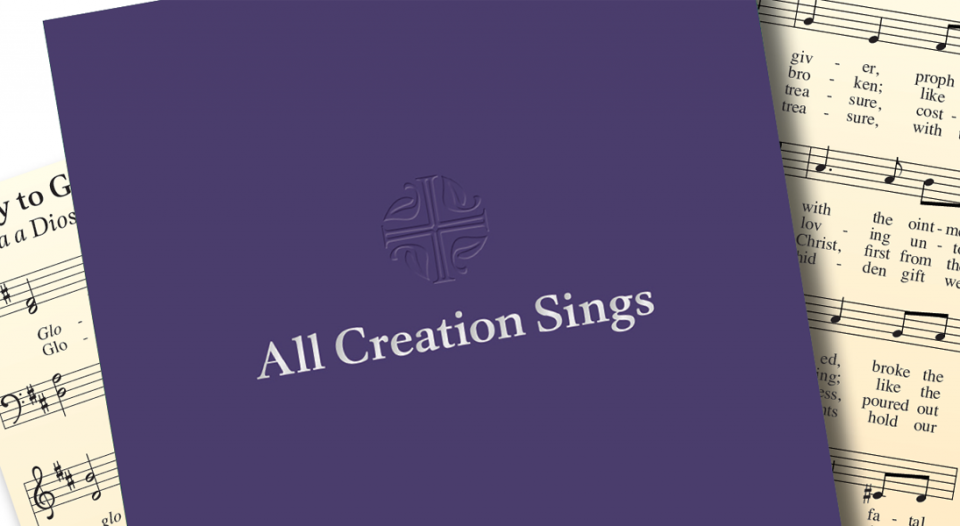 The search for a title for the new supplement to Evangelical Lutheran Worship (ELW) began with a brainstorming session. A small group met and wrote every suggestion they could think of on a whiteboard. By the time they finished, they had a list of over 100 possibilities.

Eventually the title All Creation Sings rose to the top of the list. It seemed fitting for several reasons. It was rooted in Scripture and tradition. It also tied into some of the supplement’s new material, which focused on care for creation. The title even evoked a timely sense of connectedness.

Martin Seltz, vice president and publisher of Augsburg Fortress (an imprint of 1517 Media, the publishing ministry of the ELCA), said the title seemed especially relevant as the church examines its relationship with creation. It put “the emphasis on the whole of creation,” he said. “And we as a part of creation are singing together.”

Selecting a title was just one step in the yearslong process of creating this resource. The work began in 2017 when 12 pastors, deacons and worship scholars gathered to discuss what was next in Lutheran worship. They proposed curating a collection of ideas and material that had arisen in the decade since ELW’s publication in 2006.

The church body voiced a need for more material around four major topics: creation care, lament in times of crisis, healing and wholeness, and justice and peace.

After that, the ELCA worship team and Augsburg Fortress mapped a plan to produce a new supplement.

The team continued its research with a churchwide survey in 2018. While the responses contained a wide array of worship-related hopes and concerns, some patterns did emerge. Overall, the church body voiced a need for more material around four major topics: creation care, lament in times of crisis, healing and wholeness, and justice and peace.

In May and June 2019, the team issued a public call for new hymn suggestions. Jennifer Baker-Trinity, program director for resource development (a position shared between the ELCA and Augsburg Fortress), said the team asked people for “songs you’ve sung that you think the whole church should know about.”

John Weit, ELCA assistant to the presiding bishop and executive for worship, said, “We were expecting maybe a couple hundred, but we received over a thousand submissions.”

The eight-member hymnody working group reviewed them all. Team member Julie Grindle said she alone was assigned 400 to 500 hymns. She gave careful attention to every single one “because the work was that important.”

Once the team members had sifted through all the submissions on their own, they gathered in person, spent hours singing and discussing hymn candidates, and built up a refined but diverse collection of music.

At the same time, another group focused on liturgy. “The liturgy group was tasked with doing a deep dive into what’s out there,” said member Jon Niketh. “We were told to look through every book we had.”

Group member Denise Rector contributed a lament and prayer on racism. She admitted that, as a Black woman, she brought a degree of wariness to the project.

When she first came to the ELCA—the whitest denomination in the United States, according to the Pew Research Center—she didn’t always feel included in the liturgical “we.” And in general, she thinks Lutherans have a tendency to become detached from the words they speak in worship.

“I feel a very sacred responsibility to write the words that my siblings of color need to hear.”

During her involvement with All Creation Sings, though, she valued the opportunity to explore the emotional side of liturgy. Now she hopes her work can give the Lutheran community words to engage with the difficult topic of racism and can make that community more inclusive. “I feel a very sacred responsibility to write the words that my siblings of color need to hear,” she said.

Once the working groups submitted their recommendations and the planning team had commissioned and gathered additional material, the supplement went through a liturgical and theological review.

The finished work contains liturgies, prayers and 200 new hymns and songs. It includes new expressions of worship, such as a contemplative service of word and song, a communion setting presented in both English and Spanish, and many songs meant to be learned by ear.

All Creation Sings will be published in November. The planning team recognizes the strangeness of the supplement arriving during the COVID-19 pandemic, when most congregations can’t worship together in person. But in some ways the work seems even more relevant.

“These hymns for healing and wholeness and lament are going to fill a need for folks even though we can’t sing together as an assembly,” Weit said.

The title, All Creation Sings, has taken on new meaning in the pandemic. Seltz hopes it will remind people that, through worship and song, they’re still connected—to one another and to the entire cosmos.

“It should evoke some humility within us,” he said. It should also give hope: “Choirs aren’t singing; we’re not singing in church. But still, creation sings.”

How do we select songs for all seasons?