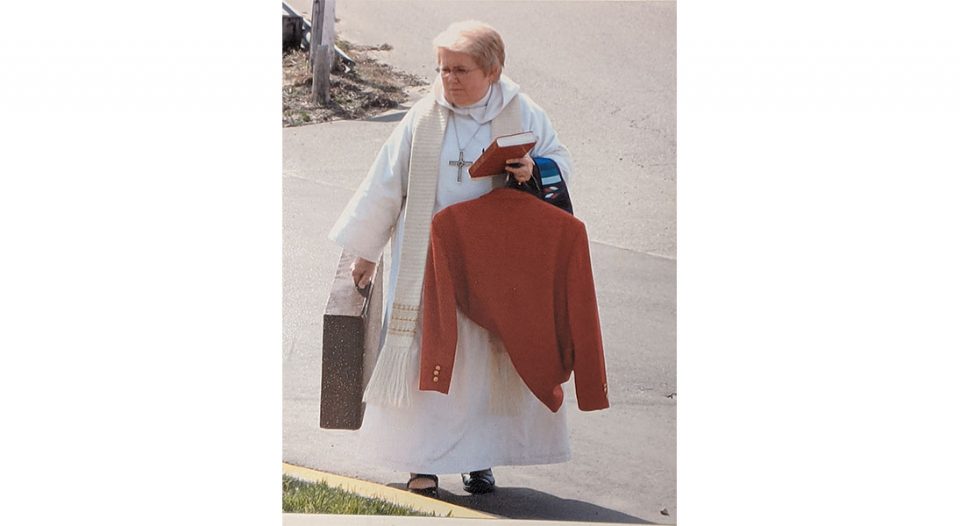 April Ulring Larson, bishop emeritus of the La Crosse Area Synod, prepares for worship on a typical Sunday as bishop in 1992. Ulring Larson was the first woman synod bishop elected in the ELCA.

It was June 11, 1992. My husband, Judd, and I were traveling to the La Crosse Area Synod Assembly, where I was one of the final nominees for bishop. My last words to our children as we walked out the door of our home in Rochester, Minn., were, “Don’t worry! I promise there is no chance I will be elected bishop.”

If I’d been a man, I likely would have been preparing to be elected bishop. After all, I was the only candidate in the top three in three out of the four conferences. (The La Crosse Area Synod’s nomination process begins in its four Conference Assemblies: each conference nominates three candidates. Those candidates are bishop nominees at Synod Assembly.)

But I’m a woman, and I was an outsider, and I believed it was not possible that I would be elected.

When clergy sisters had come close so many times but not been elected, I had said, “The church flirts with women leaders but is unwilling to marry them.”

Ever since the national ELCA Constituting Assembly when Barbara Lundblad, a pastor, had come in fourth for presiding bishop, the women clergy in attendance thought that, in the coming synod assemblies, many women would be elected synod bishops. These women candidates for synod bishop in the 65 new synods across this church were amazing pastors, stunning leaders and brilliant theologians, and were filled with the love of Christ. Many were finalists. None was elected.

If I said “yes” to this synod where I did not know anyone, I would not get elected. But I could look my clergy sisters in the eye and say, “I took my turn.”

Synod election after synod election, these extraordinary women leaders were not chosen. It was shocking and heartbreaking. Any of them would have been not only a fabulous bishop but a great first woman bishop.

Prior to 1992, I had been unwilling to allow my name to be in a bishop election process. That changed on a winter day that year when a pastor called from another synod in a different region. She said, “I was so moved when you led the music at the 20th anniversary of the ordination of women in Anaheim. There were so many dark moments, but every time you led a song, you brought light and life. You were filled with the Holy Spirit.”

In that phone call I felt God’s call willing me to participate. At that time, I was serving as an assistant to the bishop in the Southeastern Minnesota Synod. Receiving this call from across the Mississippi River, from a region where I did not know anyone, felt to me as if I could participate and not worry about being elected. I did not want to be the first woman bishop. If I said “yes” to this synod where I did not know anyone, I would not get elected. But I could look my clergy sisters in the eye and say, “I took my turn.”

So I said “yes” to this pastor I did not know. Then I said one more thing: “I need you to promise there will be no campaigning.”

The pastor gave me her word and said, “Let us see what the Spirit does. If you are in the top three candidates in a conference, you will need to come to the spring bishop candidate forums.”

Another month went by, and late in the evening I got a call from a different pastor, who reported, “You were first in our conference.”

I got off the phone and said to Judd, “There is nothing to worry about. I think they have 12 conferences in the La Crosse Area Synod.”

Sometime later I received a phone call from another pastor, who told me I was second in her conference. I asked, “Does this mean I am supposed to attend those forums?”

Her voice sounded short: “You were already in the forums!” She then told me the dates, which I needed to clear on my calendar. In these forums, each candidate was expected to deliver a five-minute speech and answer spontaneous questions from the floor.

All of this brought me to June 11, 1992. That night at our hotel, I wrestled with my nomination speech. I did not know the people in this synod. Lying awake the entire night, I finally decided to just confess in my speech, “I do not know you.”

That morning, June 12, as we walked into the Synod Assembly, I prayed, “If it is OK with you, God, I would like to come in sixth out of the seven candidates. After all this time and the forums, I would be embarrassed to come in seventh out of seven.”

The candidate who preceded me in the speeches was a World War II veteran who had survived two ship bombings. His final words were, “No one should be elected bishop who has not shed blood for his country.” After him, it was my turn to speak.

Opening the door to our home, I saw our living room filled with bouquets of flowers. In my life I had never seen so many! They came from all over the country and the world.

Judd said you could have heard a pin drop on the carpet as I walked from the visitor section in the back of the sanctuary to the front to speak. I don’t remember most of the speech. All I remember is how long that walk felt.

At the first ballot’s results. I heard, “April Larson: 90 votes.” The next highest candidate had 54, and so forth. I thought I had misheard. I leaned over to the person next to me and said, “What were the results?”

I was stunned. I turned to Judd and whispered, “He didn’t hear it right, either.”

The rest is history. By the end of the day, I was the bishop-elect of a synod I did not know, but they must have felt they knew me.

We headed back to Rochester the next day. Opening the door to our home, I saw our living room filled with bouquets of flowers. In my life I had never seen so many! They came from all over the country and the world. I exclaimed, “Look at all these flowers—and I’m not even dead!”

Written again and again on these endless bouquets, fragrant with the love and joy of the church, was “Congratulations, Bishop April Larson.”

May God’s Spirit continue to change and renew our “always being made new” ELCA.