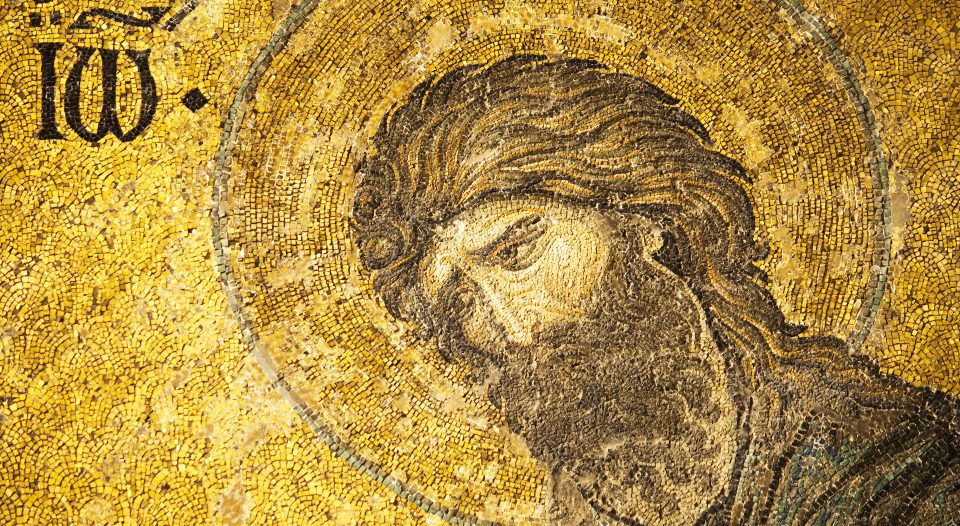 Mosaic of St. John the Baptist in the Hagia Sophia, Istanbul, Turkey.

Sometimes I notice a kind of buzz among my students before the first class starts. They’ve heard that I’m a good professor, or that my classes will change the way people read the Bible. But then, when I walk in (or Zoom in), I’m kind of disappointing in real life. I’m not especially charismatic. I say “umm” a lot in conversation. I like to think that I do help people acquire tools to read the Scriptures with more depth than they had previously. But when that happens, it’s not because I’m an amazing human. Rather, I’ve just trained hard over the decades to be able to help and serve people as they seek to continue to wrestle with Scripture. John and Jesus, it seems, both go through this same experience of initially disappointing people who held high expectations but, nevertheless, end up fulfilling their roles before God and humans.

In the Gospel of John, the Pharisees’ disciples are confounded as to what John is doing. Under what authority is he baptizing on the far side of the Jordan River? Jews who read the Scriptures were looking for powerful figures to bring transformational changes to the land suffering under Herodian and Roman oppression. Those who came to John asked him in turn if he was the messiah (foretold in Isaiah 61:1-2, among other places), Elijah (from Malachi 4:5-6), or the prophet (from Deuteronomy 18:14-22). John denied being all these people (John 1:20-21).

The disappointed disciples then asked John, “Why are you baptizing, then, if you aren’t any of these people?” (John 1:25). John was the voice crying out to prepare God’s way in the wilderness and baptizing with water before the greater one revealed himself. Those who went out to see him must have been disappointed that he wasn’t the messiah, Elijah or the prophet. Yet, after John’s death, Jesus confirmed that John did, in fact, fulfill the role of Elijah, saying: “If you will accept it, John is Elijah who is to come” (Matthew 11:14).

The disappointed disciples then asked John, “Why are you baptizing, then, if you aren’t any of these people?” (John 1:25).

In the same way that John initially disappointed people but fulfilled his role to prepare the way for the Messiah, Jesus initially disappointed many who were hoping that he would bring the peace and justice of the messianic age immediately. Looking forward in Jesus’ life, long after his birth, he was asked by John’s disciples if he was the coming one or if they should look for someone else (Matthew 11:3). John had been sent to prison by Herod Antipater and things were looking grim. Understandably, John wanted to know if Jesus was going to overthrow unjust kings and kingdoms, commence the messianic age and free his relative, John, from prison. Jesus’ response to the question raised by John’s disciples’ is confusing:

Go and tell John what you hear and see: the blind receive their sight, the lame walk, the lepers are cleansed, the deaf hear, the dead are raised, and the poor have good news brought to them. And blessed is anyone who takes no offense at me (Matthew 11:4-6).

Why would anyone stumble on account of this description of Jesus? Healing folks and raising people from the dead while also preaching good news to the poor sounds like a successful ministry. But Jesus’ words no doubt caused John’s disciples and John, in turn, great sadness because of what he did not say.

Looking back at Isaiah 61, we see that when Jesus mentioned proclaiming good news to the poor, he referenced this well-known passage to describe his ministry:

The spirit of the Lord God is upon me, because the Lord has anointed me; he has sent me to bring good news to the oppressed, to bind up the brokenhearted, to proclaim liberty to the captives, and release to the prisoners; to proclaim the year of the Lord’s favor, and the day of vengeance of our God; to comfort all who mourn … (Isaiah 61:1-2).

Indeed, Jesus’ description of his own ministry referenced several passages from Isaiah, most notably:

I am the Lord, I have called you in righteousness, I have taken you by the hand and kept you; I have given you as a covenant to the people, a light to the nations, to open the eyes that are blind, to bring out the prisoners from the dungeon, from the prison those who sit in darkness. (Isaiah 42:6-7).

Say to those who are of a fearful heart, “Be strong, do not fear! Here is your God. He will come with vengeance, with terrible recompense. He will come and save you.” Then the eyes of the blind shall be opened, and the ears of the deaf unstopped; then the lame shall leap like a deer, and the tongue of the speechless sing for joy (Isaiah 35:4-6).

Jesus pointed out that he had already performed several of these activities. He opened the eyes of the blind, he unstopped the ears of the deaf and he helped the lame walk/leap. What he did not claim to do was free prisoners or come with vengeance. These famous Isaiah passages would have been known by John, his disciples and Jesus. In answering John’s question the way he did, Jesus was recalling to his relative’s mind the truth of Scripture that God promises to free God’s people from prison, but at the same time admitting that immediately overthrowing the corrupt and violent political system was not Jesus’ earthly ministry. With this answer, Jesus told John that he was going to let him die in prison. Blessed are those who do not stumble over this disappointing Jesus.

Jesus has not yet made everything right. We know that people who call out against injustice and urge the powerful to repent of their wrongdoing are still frequently murdered or disappear by the forces of the empire. And yet, we believe and hold on to hope that Jesus will come to judge everyone—the living and the dead. Jesus’ birth did not mark the completion of all prophesy or the accomplishment of the kingdom. His birth, rather, started a new chapter in just how drastically God was prepared to act and enter human time and space to save us from captivity to sin and death. That is why we still look for Jesus to return. Celebrating Advent is equal parts looking back to Bethlehem, and also making our hearts and neighborhoods ready to welcome the coming messiah.