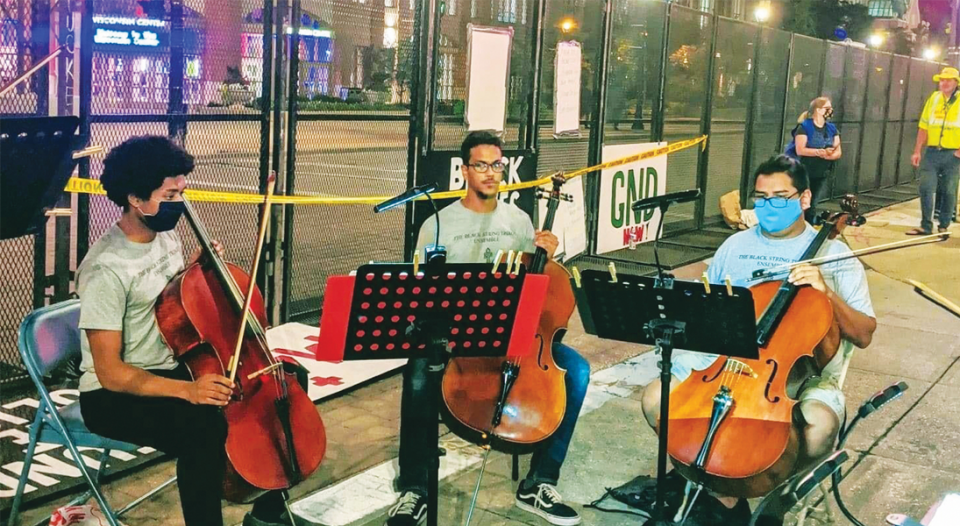 Dayvin Hallmon (not shown), a member of All People’s Lutheran Church in Milwaukee, founded the Black String Triage Ensemble in 2019. The ensemble offers healing music in the immediate aftermath of community violence “to address pain; foster healing; promote love; call for justice; and guard against hopelessness.”

Dayvin Hallmon stands in the glow of streetlamps with a viola nestled under his chin.

Red and blue lights pulse across darkened homes and storefronts. Milwaukee police mill about, investigating the scene: a man shot while driving; his car crashed into a nearby building. Neighbors trickle outside to assess the damage.

An hour earlier, give or take, Hallmon learned of the shooting and messaged his ensemble via Facebook: Headed to a potential scene. I’ll let you know if something’s there.

Now the Black String Triage Ensemble sits before him, poised to perform on this warm summer night in 2020. They’ve come as an antidote to the trauma caused by frequent community violence. They’ve come to make music and make people feel seen, to make them feel something. They’re short on players, so tonight Hallmon will conduct and play viola. The ensemble looks to him, eyes expectant.

In September 2018, Hallmon moved to Milwaukee, charged with an idea to serve the city’s Black and Latinx population.

“My synod office was the first place I went to,” he said. He told his bishop, Paul Erickson, that the Greater Milwaukee Synod needed a “very visible, undeniable, sincere presence addressing the needs of communities of color.”

Hallmon’s ministry: An all-volunteer ensemble composed of Black and Latinx string musicians who would deliver healing music shortly after a fatal shooting. They would show up alongside traditional first responders but tend to the community’s unaddressed spiritual wounds. They’d perform music by Black and Latinx composers, curated by Hallmon to speak to the five stages of grief, plus a sixth stage—faith.

Theirs would be a ministry of presence.

“Something said to me in the middle of all these artifacts: ‘address the life condition.'”

Erickson saw that Hallmon, a talented musician who’d previously served as music director of St. Mary Lutheran Church in Kenosha, Wis., wanted “to use the gifts God has given him to preach the gospel [in response to] violence.”

He threw his support behind Hallmon, helping him secure practice space at Ascension Lutheran Church, Milwaukee. Erickson also connected Hallmon with ELCA pastor Molly Doreza, who, along with Ron Ballew, a United Church of Christ minister, became the group’s two chaplains. Both accompany the ensemble to performances and answer onlookers’ questions so the musicians can focus on their set.

The ensemble is on call for performances between Memorial Day and Labor Day, when it’s safe to play strings outside, with members currently preparing for their third season.

The inspiration for the Black String Triage Ensemble struck in March 2018 after Hallmon visited the National Museum of African American History and Culture in Washington, D.C. At the time, he’d been serving as Kenosha’s county board supervisor and was still reeling from a recent shooting near his apartment.

“We’re walking through [the museum] and there’s Nat Turner’s Bible, there’s Harriet Tubman’s hymnal, there’s Thomas Dorsey’s piano,” he recalled. “Something said to me in the middle of all these artifacts: ‘address the life condition.’”

Back in his hotel, Hallmon turned on the television and heard Oprah Winfrey ask, “How do we fix the hole in the soul of people?”

At the crime scene, a young man runs up and shouts, “Oh God, oh God, that’s my friend! We don’t even live here! I can’t believe that happened.”

Hallmon tells his musicians to hold off for a moment. A siren wails. The medical examiner’s car pulls into view. “Man, I hate that vehicle,” the ensemble’s cellist says.

“I know, Colin. Just focus on the music,” Hallmon replies, scanning the perimeter. More than once he’s been told by Milwaukee police, with whom he has a cordial relationship, to be on the lookout for residual violence in the aftermath of crimes, so he keeps his eyes moving to keep his group safe.

The young man who has lost his friend continues carrying on, and the medical examiners are starting their work. The assembly grows, and Hallmon decides it’s time to begin worship.

He turns to address the ensemble: “We’re gonna start with ‘Sometimes I Feel Like a Motherless Child.’” Skilled fingers pluck at the strings, each release of flesh from the metal advancing the spiritual’s steady, haunting melody as it cuts through the surrounding chatter.

Heads turn toward the music, and stillness descends over the crowd. A neighbor comes up to the young man whose friend was murdered and encircles him in his arms.

Ballew often prays over Mark 4:35-41 (Jesus stills a storm) before joining the ensemble for a performance. “If we can bring some peace and quiet in the middle of the storm for a few minutes, that’s what we’re going to do,” the chaplain said. “The police will walk up and say, ‘That really touched me at this moment.’”

Doreza added, “Their music is not a postlude to the events of suffering but a song sung in the midst of it, bringing hope at the very moment it is most needed.”

The ensemble has offered peace and comfort at some two dozen sites since its inception, expanding its performances beyond crime scenes to tribute concerts for medical personnel treating COVID-19 patients in early 2020 and a “peacekeeping mission” during protests in Kenosha following the August shooting of Jacob Blake.

As his ensemble grew in popularity, Hallmon sought out the synod to serve as a fiduciary steward while he worked toward securing its nonprofit status. Going forward, he hopes to expand this ministry to Detroit, Chicago and other cities.

“This needs to be in every city that has a Black and Latinx population,” he said. “What better way for the whitest church in America—that is also a singing church—to take a massive step forward? I want to know, who are the [ELCA] congregations that are interested in learning about this, not just [those who] feel called in terms of financial support, something that’s desperately needed. Who wants this in their community?”

Rich tones from violin, viola and cello intermingle with the blare of emergency vehicles. In the dark of the night, neighbors draw closer and wrap their arms around each other. Hallmon directs his players to skip ahead two songs in their set to the conclusion, a string arrangement of “Total Praise” by Richard Smallwood.

Hallmon’s set notes for this song on the ensemble’s website say: “Gospel music reminds us that no matter how dark our midnight is, no matter how long it lasts, hope for a new day with new possibilities is always just beyond where we can visibly see it. The only requirement is belief. Believing in something under such circumstances is always an act of faith.”

“Total Praise” ends with a series of ascending amens; its rendering in strings leaves the crowd spellbound. When the ensemble members finally ease their bows off the strings, Hallmon notices that many gathered are openly weeping.

Members of the Black String Triage Ensemble exchange glances, then pack up silently. When they’ve reached their cars, someone asks, “So, should we see if there’s another tonight?”

“We did what we came to do,” Hallmon answers. “We’re going home.”

“Set free to do the work”