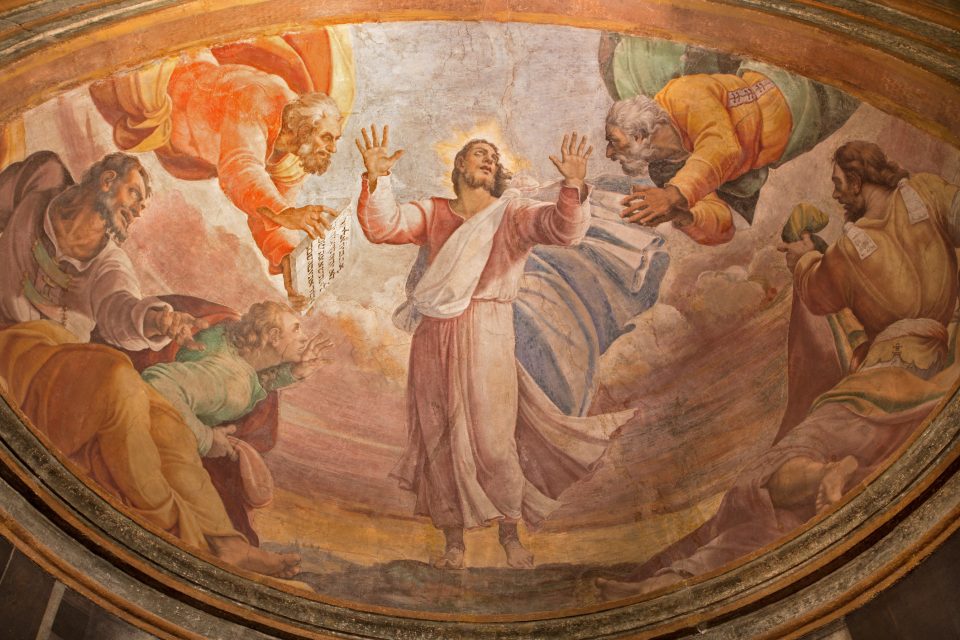 Jesus took three of his especially close disciples, Peter, James and John, and ascended a mountain. While there, he was transfigured before them. Moses and Elijah appeared in order to have a conversation with Jesus. Then God spoke, saying, “This is my beloved son. Listen to him.” When Jesus and his disciples went down the mountain, he warned them to keep the messianic secret.

There is so much here! The verb that we translate as “transfigured” (μετεμορφώθη) means some sort of radical change into another form. When we talk about “metamorphizing” (our English word comes directly from the Greek), we think of a caterpillar becoming a butterfly or a pollywog becoming a frog. In other words, metamorphizing is a one-way change that marks a new stage of life. In what ways was Jesus different after that mountaintop experience? I think his life changed as a result of words that were spoken on that mountain.

What did Jesus, Moses and Elijah talk about? Obviously, we can’t say anything with certainty. But I would expect that when three people who haven’t met each other start a conversation, frequently their talk turns toward common experiences. Moses, Elijah and Jesus certainly had several experiences in common to discuss.

In the Hebrew Bible passage this week, Elijah, Elisha and multiple companies of prophets all know that Elijah is about to be taken away. Elisha spent those last moments with Elijah and literally took up his mantle after the prophet was taken away. Like Elijah, when Moses knew that his time on earth was short, he consecrated his mentee, Joshua, to lead in his stead and proclaimed his own replacement (Deuteronomy 31). In Mark’s Gospel, Jesus foretells his own death and resurrection to the disciples (9), who would take up his work after he ascended. Moses, Elijah and Jesus all knew with certainty that the end of their time on earth was coming because the Lord had told them. They made sure to prepare their disciples for what would come next.

I would expect that when three people who haven’t met each other start a conversation, frequently their talk turns toward common experiences. Moses, Elijah and Jesus certainly had several experiences in common to discuss.

Imminent death is a difficult concept to grasp even after a long illness provides plenty of foresight about the end. In the past year, far too many of us have felt the horrible pain of losing someone suddenly after an illness of only a few weeks, or even days, without time to plan or imagine what life would be like for those who continue living.

But the ends of these three men were atypical, to say the least. God told Moses that he would die outside the promised land, but then the Lord buried Moses as one does for an especially close friend. Elijah was said to have not died but was taken in a whirlwind. Jesus, as we know, suffered an excruciating death as a falsely accused criminal. On the mountaintop, Moses, Elijah and Jesus might have been discussing how, even at the end of their times on earth, God’s love and embrace was never-ending. God’s affirmation of Jesus as the beloved Son during the transfiguration might have been a kind of reassurance of their relationship in the face of his impending death.

But I think the most likely topic of conversation was about entering and emerging from water. Moses raised his staff and watched as God parted of the Sea of Reeds (Exodus 14:15-31). His disciple, Joshua, imitated his master and led the people as God opened the Jordan River (Joshua 3:7). Likewise, when Elijah crossed the Jordan, he struck it with his outer garment to separate the waters (2 Kings 2:8). And on his way back after Elijah was taken up, Elisha used his master’s garment to do the same (2 Kings 2:14).

In what way, then, did Jesus enter the water and come out on the other side? Jesus, like Joshua, Elijah and Elisha, entered the Jordan River. But when he did, he got all wet. When Jesus undertook the baptism of his relative, John, the water was not split for him—he entered it on purpose. Jesus pursued God and blessed the people, not by crossing a dry water course but by being baptized to fulfill all righteousness (Matthew 3:15). Jesus’ baptism (we will read about it again next week) is intentionally called to mind in the transfiguration story. In both instances, God proclaims that Jesus is the beloved Son.

Just as Moses’ and Elijah’s disciples imitated their masters in passing through the waters, we, too, have the honor to emulate our master. Jesus’ last commandments in the Gospel of Matthew were to make disciples of all people, baptize them and teach them to obey all of Jesus’ commandments. Being followers of Jesus—Christians—means that we can’t neglect any of these three tasks—making disciples (not just converts), baptizing disciples and teaching them to obey the commandments.