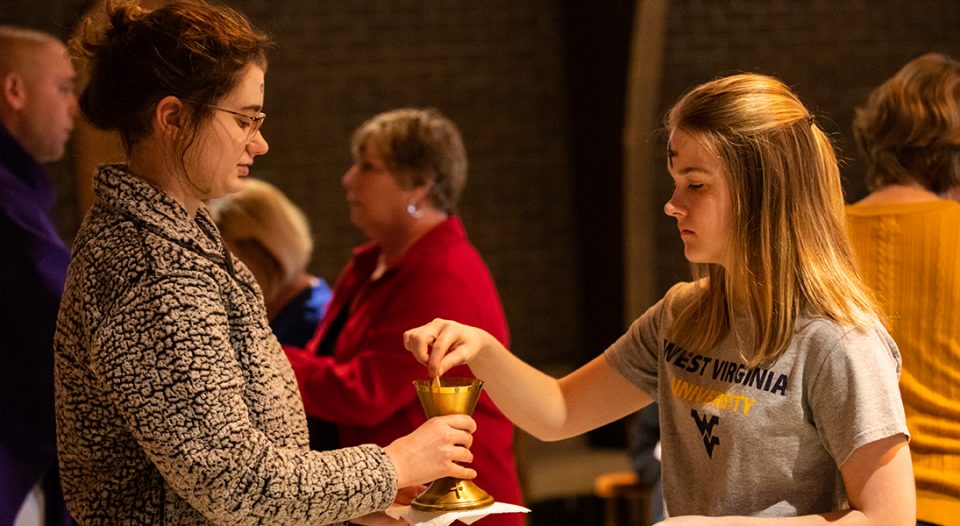 Communion is distributed during a worship service at Lutheran Campus Ministry at West Virginia University (Morgantown).

Lutheran campus ministry (LCM) can sometimes be an afterthought to the greater church. I spent my whole life in Lutheran congregations and had never heard of campus ministry before coming to Northwestern University, Evanston, Ill. However, LCM has been a vital part of the Lutheran community since the ministry’s inception in 1907 as a community “to attend to the needs of students” (A Brief History of Lutheran Campus Ministry: Written for the Centennial Celebration in 2007).

Throughout the next century, LCM attended to the needs of all students. And in the 1960s and ’70s, campus pastors were on the fringe of the church. They were involved in anti-war protests and the civil rights movement.

As stated by the former United Lutheran Church in America in the early 20th century, “Religious work in universities and colleges … has been established as not only a legitimate, but also a necessary sphere of general church activity.” Today this “necessary sphere” continues to exist and thrive, even amid declining financial support. Over the last 50 years, it has provided a place for students to ask hard questions and grow in their faith. Today these students are campus pastors, scientists, organizers, congregational leaders, musicians and more.

One former student, Bill King, was introduced to campus ministry as a graduate student in the ’70s and felt called to serve as a campus pastor. He wanted to be at the intersection of academia and church, and he felt as if there was never going to be a time when students wouldn’t be coming and asking hard questions, as King himself had. Today LCM continues to inspire students to ask these questions and deepen their faith.

Emilie Jones, a 2018 graduate, was drawn into theological discussion at Lutheran Campus Ministry at Northwestern University (LCMNU) because “it lived out the concept of being able to question and being encouraged to question and challenge” and didn’t oppress questions as doubt. Jones’ connection to LCMNU was important because it allowed her to experience a “combination of learning faith and seeing it modeled at the same time.”

Alicia Anderson, pastor of Lutheran Campus Ministry at Penn State University in State College, Pa., said there is “something incredibly important about peer-to-peer faith formation,” where you have peers who are struggling with the same questions as you are or who are asking questions you had not yet even considered.

In addition to providing space to ask hard questions, LCM continues to be important because it follows in the footsteps of the campus pastors of the ’70s and ’80s by pushing out ahead of the church on important social and political issues.

“Congregations really have a hard time being uncomfortable,” said John Lund, pastor of Emmaus Campus Ministry at the University of Montana, Missoula, adding that they tend to shy away from political issues. Lund said a lot of pastors in Montana are scared to talk about Black Lives Matter but, as a campus pastor, he has a lot more freedom to make statements such as “Black lives matter,” and that students respond by saying, “Of course—why is that even a question?”

Lund and Jones agree that there are cultural perceptions of Christians with which to contend. “Generations of people have been traumatized by Christians,” Lund said. And Jones has observed a perception that Christians are unwelcoming and require someone to believe a certain way or leave. Jones and Lund said LCM is doing the important work of being actively welcoming and dispelling the negative connotations associated with Christianity.

LCM fulfills these—and many other—roles in the Lutheran church, but it can continue to do so only with the support of congregations and the greater church. By producing students, young adults and leaders with a “deep and well-rounded faith,” Jones said, LCM has become the future of the church.

Anderson said that because LCM is part of raising up leaders for the church, our communities and the world, she hopes “that campus ministry will have a more prominent place in our church’s understanding of the ministry of the church.” To find these future leaders, LCM needs connections with congregations that can point incoming college students in the direction of a supporting faith community such as LCM.

LCM also needs financial assistance and opportunities for a network of campus ministry practitioners. LCM is very different from a traditional congregational ministry, and campus pastors need opportunities to meet up for continuing education and learning.

We need LCM because, as Lund said, “If you don’t have a community of people you can gather with and talk about real things, what do you have?”

Morgan Lee
Morgan Lee is a writer, editor and coffee enthusiast. She has a passion for helping others and works mainly with churches and nonprofits to help them stay organized and put their best written foot forward.