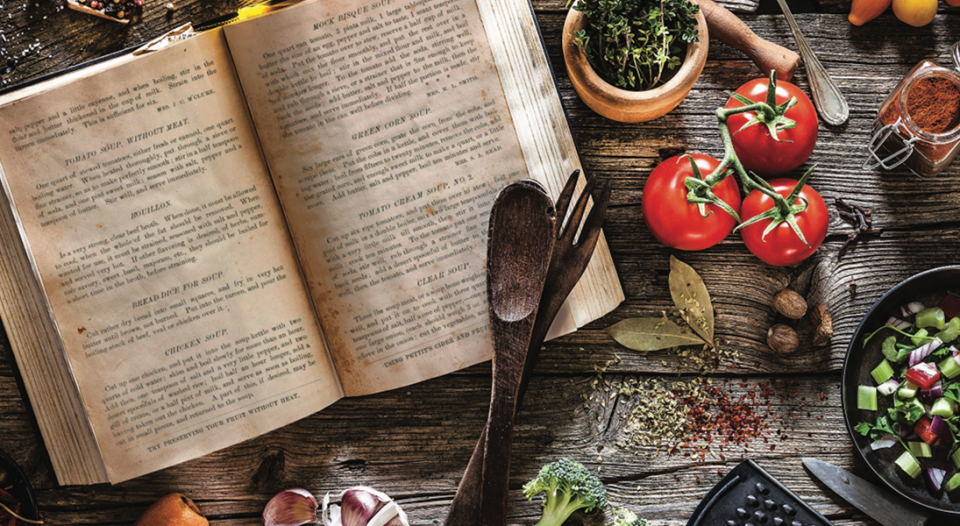 With numerous online recipes at any cook’s fingertips, people might think that church cookbooks are a thing of the past. But in Lutheran congregations, with their long history of congregational meals and food ministries, cookbooks are still beloved.

Many vintage and contemporary Lutheran church cookbooks pop up in an online search, with some sold by collectors and others on Amazon, Etsy and eBay. With names such as The Lutheran Ladies Cookbook and Lutheran Church Basement Women: Lutefisk, Lefse, Lunch and Jell-O, the books offer an array of recipes for shareable dishes.

A congregation might create a cookbook to commemorate an anniversary, strengthen community, engage members or to simply compile church favorites in one handy spot. The books can also convey a congregation’s story and history.

Perhaps the most historic cookbook connected to the ELCA is Mohawk Valley Cook Book, published in 1889 by the Ladies’ Society of St. Mark Lutheran Church in Canajoharie, N.Y. With a Library of Congress copyright number, the first edition can be viewed on the Internet Archive, and numerous reproductions are available for purchase online.

The preface of the 108-page book reads: “The Mohawk Valley Cook Book has been prepared and carefully revised with special reference to the needs of the young and inexperienced housekeepers. … Much of the information which it contains will be found useful in every home, of which the ‘house-mother’ is herself the head.”

Since those early days of “housemothers,” St. Mark has grown and merged with another congregation to become St. John and St. Mark Lutheran, whose pastor is Elisabeth Aurand. Not much is known about the historic cookbook, she explained, and a flood damaged the congregation’s archives in 2006. But the Mohawk Valley Cook Book isn’t the only one to come from the congregation. It has also produced Crumbs of Comfort.

The congregation has food at the center of some of its ministries, including its community garden. “In general, food is a part of culture, and for Lutherans, Christ and culture are in tension,” Aurand said.

Cookbooks can also help build community among those who create them and those who receive them.

Elfriede Lynn, a 50-year member of St. John-Incarnation Lutheran in Lynbrook, N.Y., has fond memories of working on the congregation’s Holy Smoke cookbook back in the day. Still cooking for herself at age 85, she said: “I think people still use Holy Smoke. Cookbooks bring people together.”

Last year Zion Lutheran Church in Anoka, Minn., produced Reverent Recipes for its 150th anniversary. The church also published a book for its 125th. “There was a call for a new cookbook and a lot of people wanted it,” said Cathy Westrum, who co-chaired the cookbook committee.

The group discussed how cookbooks aren’t as popular now because of the internet, Westrum said, but decided to proceed anyway. “Internet recipes don’t replace family, community, church favorites,” she added. “People often say that they want a recipe from friends and fellow congregants. People want their mom’s or grandmom’s recipe in a compilation right at their fingertips.”

The committee wondered how sales for Reverent Recipes would go and was elated when the $10 presales skyrocketed, Westrum said. The book did so well that the committee had to discuss a reorder. Because the congregation gives copies to as many as 100 new families joining the congregation each year, the supply was dwindling.

“People enjoy submitting a recipe that they like, because when you put it in a church cookbook, everyone knows who you are.”

Westrum said the cookbook includes a narrative of Zion by its historian, old church photos and a list of former pastors. Some recipes had been handed down from early church members who’d immigrated to the United States and whose descendants might note, “Our family has been making this sausage for years.”

Westrum said some people had fun with the project: one pastor provided his recipe for boiled water.

In Hopkins, Minn., Gethsemane Lutheran Church is famous for its cookbooks, said Eileen Munson, a 56-year member. Munson should know—she has worked on three.

“The yellow cookbook (Gethsemane Sampler) is a prize,” she said. “If you have one of these, it’s valuable. People love this cookbook. Now, when you look through the recipes, many of the people are gone.”

In addition to contributing to the church budget, a cookbook also tells who is a good cook, Munson said with a smile, adding, “People love cookbooks. We’ve had them for sale all the time. People enjoy submitting a recipe that they like, because when you put it in a church cookbook, everyone knows who you are.”

Munson is especially proud of her submission for Swedish rice pudding, served with lingonberries: “It’s really a good rice pudding.”

Because so many recipes are now available online, Gethsemane may not publish another book, but Munson likes using them all the time. “Maybe church cookbooks have come and gone,” she said, “but I love how it shows a history of being drawn together by our ‘Swedishness’ and faith in God.”

In the case of Emmanuel Lutheran Church, Venice, Fla., creating a cookbook became a fellowship project during the pandemic lockdown.

“We had to do something because we couldn’t meet,” said Pat Crary, fellowship committee co-chair. “If we learned anything during the pandemic, it was how to eat and cook more.”

Since the committee couldn’t sponsor regular in-person monthly programs such as bingo or trivia games, it decided to engage the congregation by asking for recipes. The 125-page book, created online with vendor software, allowed the committee to fulfill its mission to “connect people to Jesus Christ and each other through love, laughter and prayer.”

“What we were trying to do was keep the congregation together and help them to feel cared for,” Crary said. “It was a fun project.”

Josh Fite, pastor of St. John Lutheran in Ashwaubenon, Wis., agrees that a congregational cookbook can promote community ministry. “I think that it’s a way for individuals and families to have a little bit of connection,” he said. “When a new family gets the cookbook and hopefully uses it, coming across a recipe might be intriguing or look like something grandma used to make. It’s a conversation starter.”

The church has produced several cookbooks to commemorate anniversaries, and recently it has been posting some of its recipes on social media with the tagline “Feeding the Flock Fridays.” A recent Facebook post showed a recipe for Philly cheesesteak casserole.

Fite said the recipe postings have been especially helpful in connecting people during the pandemic. “Having a recipe is a way to gather with friends and family in some small way, even if we can’t meet personally during this time,” he said.

“For our congregation, we’re trying to create our brand as being the ‘food church.’ Our mission is sharing the bread of life. That relates to sharing the good news and feeding people with our work with food programs and [a] food pantry.”

Christ’s love served one bowl at a time

Food for body and soul