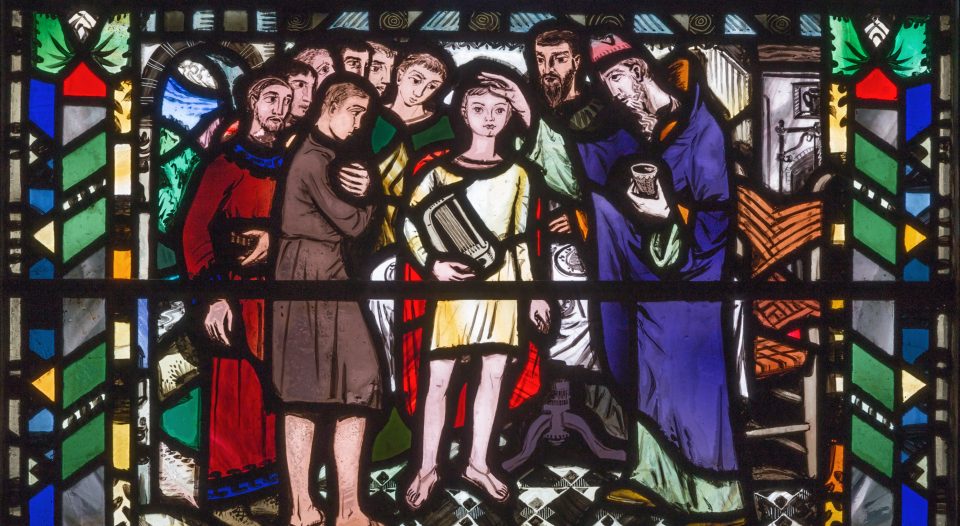 The anointing of David by Samuel on the stained glass at St. Etheldreda by Charles Blakeman (1953-1953).

This week’s Hebrew Bible passage tells the story of God choosing a king after Saul’s fall from grace.

Saul was physically huge and the most attractive man in Israel (1 Samuel 9:2). He looked the part of a king, to be sure. But when God gave him specific orders, he second-guessed them, to near catastrophe for his people centuries later (Esther 3:5-6). For this reason, Saul was abandoned by the Spirit of the Lord, who had previously been with him (1 Samuel 16:14).

Samuel had been Saul’s friend and confidant up to that point. While he also abandoned Saul, he grieved for his friend’s punishment (1 Samuel 15:35). God also felt sorry that Saul had been made king over Israel. But then God roused both Godself and Samuel out of mourning (1 Samuel 16:1) and set to work picking a new king.

The men of Bethlehem, being associated with the disfavored king, were terrified to see Samuel coming. They only relaxed after he confirmed that he was coming in peace. Crucially, Samuel told them to make themselves holy, while he set to the task of making Jesse and his sons holy. I’m not exactly sure what this means, but it sets the stage for a sacrifice and some performance, which is going to be out of the ordinary and probably strange in the people’s eyes (which is what “holy” means after all—“weird” or “strange”).

Samuel regarded Jesse’s sons as they passed before him, thinking that Elaiv, who was apparently physically impressive like Saul, must surely be the new anointed one (1 Samuel 16:6). But God responded that, while humans look at the outside of a person, God considers the heart. All of Jesse’s sons passed before Samuel and were passed over in turn.

God told Samuel to rise up and anoint David. And from that day, the Spirit of the Lord rested on him.

Finally the youngest, who apparently looked a bit strange, passed in front of Samuel. He had red skin (or more likely red hair—1 Samuel 16:12 and Genesis 25:25), beautiful eyes and was very pretty (1 Samuel 16:12). This boy seemed a bit too gorgeous to be considered kingly. If we imagine that David had the look of a physically impressive, masculine king, we miss the point of the passage, especially 1 Samuel 16:7. Saul and Eliav weren’t exactly hard on the eyes, but David seems to have been embarrassingly attractive, and not in a stereotypically masculine way. But apparently this pretty boy was exactly what God wanted. God told Samuel to rise up and anoint David. And from that day, the Spirit of the Lord rested on him.

Skipping ahead to Jesus’ parable, we are told that the kingdom of heaven is like a seed planted in a field. Without further intervention from the farmer, the seed germinates and grows, producing stalk, head and individual grains. Then as soon as the grain is mature, it is cut and harvested.

This is an apt parable for thinking about the kingship during the prophethood of Samuel. God’s Spirit picked Saul because he looked like a leader (1 Samuel 9:2, 10:24). But when he failed to live up to his promise, God felt sorry. But then God immediately set out to anoint a new king. The Spirit led Samuel to anoint a red-haired boy with beautiful eyes, not a rugged-looking manly man. We aren’t told anything about David’s height, ever, unlike Saul who was a head taller than everyone in Israel. What we do know is that David was a man after God’s own heart (1 Samuel 13:14): a lover, a poet and a warrior.

Just because God felt grieved by a terrible, idolatrous, disobedient leader doesn’t mean that the Spirit stopped working. Like a seed, God’s spirit-filled kingdom is planting, growing, harvesting and replanting all the time, even when everything around seems horrible and disappointing. Sometimes people who look like traditional, patriarchal leaders disappoint by making great shows of devotion but not actually obeying God’s word.

The great news is that God raises up those who may seem inappropriate choices to the world, or the opposite of a macho leader, to make a point that God’s concern is not with outside appearances but with obedient hearts that will press on in doing the work of God’s Spirit.