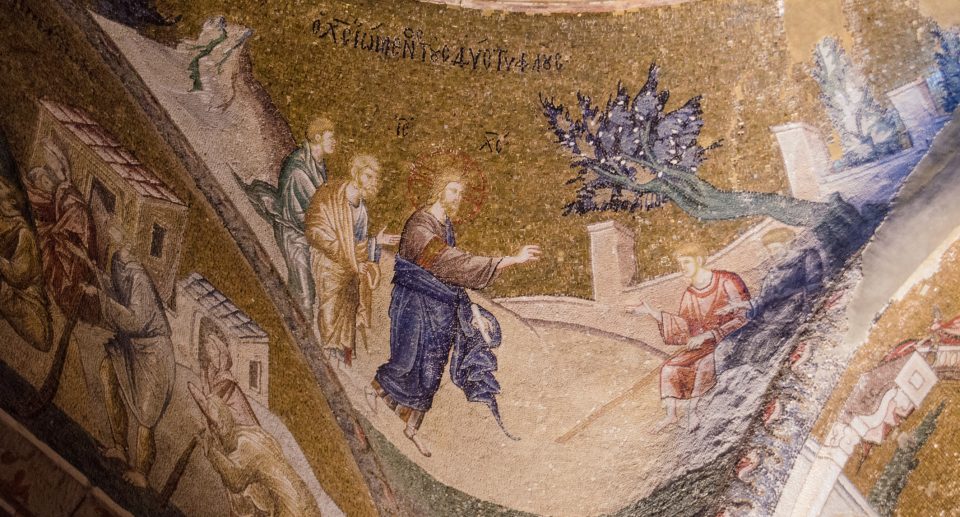 Mosaic showing the miracle of Jesus Christ and the blind beggar at the Chora Church in Istanbul, Turkey.

This week’s Gospel passage is all about Jesus’ power to remove social disgrace and to include excluded people back into society. In a word, Jesus cleanses the unclean. To see this, we have to look closely at the text.

The blind beggar sitting outside Jericho is introduced as Bartimaeus, the son of Timaeus. This is odd for a couple of reasons and should be a clue that it wasn’t a standard name. First, Mark isn’t in the habit of naming most people who benefited from interacting with Jesus, so the wording is important. Secondly, the name is odd. It could just be a name and a clarification, but this is unlikely. In Aramaic, “bar” means “the son of,” so this person is introduced as “son of timaeus, son of timaeus.” Mark really wants the readers to know that the blind person has a strong relationship to Timaeus, whomever—or more to the point—whatever that is.

Scholars differ on the point, but I contend, with considerable linguistic backing, that Timaeus is not a person but a condition. The Syriac Peshitta renders the introduction ܛܝܡܝ ܒܪ ܛܝܡܝ (Timae son of Timae), dropping the gloss “son of” as well as the Greek “-us” ending. Some read “timae” as “honored one,” but given the context it should almost certainly be read as “unclean/טמא.” Therefore, we have a man named “Son of unclean, the son of unclean” sitting by the side of the road and begging Jesus for mercy.

We must remember that Jesus was leaving Jericho when he came across Bar-Timae. This wasn’t just any road that the blind beggar was inhabiting. Jericho was cursed by Joshua after his conquest of the city (Joshua 6:26)—a curse that had wreaked devastation on the family of Hiel who rebuilt the city (1 Kings 16:34). Closer to Jesus’ time, Herod the Great had leased Jericho from Cleopatra until it was given to him at her death. He immediately set to work building pleasure palaces, swimming pools and luxurious gardens for parties that were close, but also a world away from, the religious center of Jerusalem. Many of Jerusalem’s elite went to Jericho, where the Pharisees’ rules of cleanliness didn’t seem to apply, for Herod’s lavish, Roman-style parties in the well-watered oasis town. People could simply ritually bathe and be ready for another visit to the temple if they were interested.

Jesus goes to the people whom society understands as “other,” embraces them and says, “I am with them, and they are with me.”

Aside from all the intrigues and uncleanliness of the Roman party scene, remember also that it was in Jericho that Jesus incorporated Zacchaeus back into Jewish society (Luke 19:1-9). Zacchaeus was deemed permanently unclean because he collaborated with Rome and handled its idolatrous coinage. Since even touching his fellow Jews would affect their ritual purity, he couldn’t squeeze through the crowd to see Jesus but had to climb a tree. When Jesus chose to dine with Zacchaeus, he was asserting that ritual uncleanliness shouldn’t exclude someone from full participation in society.

Zacchaeus (whose name means “innocent”) immediately gave away half of his wealth and promised that if he had cheated anyone, he would repay them four times the theft (which is way more than the 20% increase than the law demanded). Zacchaeus wasn’t a cheater, but he was unclean by virtue of being forced (I argue) into collaboration with the occupying army. Jesus powerfully demonstrated that this shouldn’t be held against Zacchaeus, who should be welcomed into full fellowship. To make the matter perfectly clear, Jesus pronounced that Zacchaeus was also a son of Abraham (and not to be excluded).

Considering this prior case of removing the sting of social exclusion due to uncleanliness in a particularly unclean city, we now return to the man twice named “Son of Uncleanliness.” Jesus went to an unclean city and specifically got involved in the lives of people who were unclean and outside of society because of their socially defined diseases. Jesus healed them, and even more importantly, associated with them. The blind man, who I have to think never answered to “bar-timae” ever again, went out and followed Jesus (Mark 10:52).

Jesus did not then, or now, heal every person. Healing is a blessing, to be sure. But much more important is that there is no one about whom Jesus allows others to say “outside,” “unclean,” “imperfect” or “gross.” Jesus goes to the people whom society understands as “other,” embraces them and says, “I am with them, and they are with me.” Jesus is our high priest who works intercession for us and pronounces us not only “innocent” but also “clean” (Hebrews 7:24-25). Our role in relation to our siblings, whoever they may be, is to be like Job’s family who returned to him after his uncleanliness and empathized, comforted, shared meals and helped build back up what he had lost (Job 42:11).

The bottom line is that when someone calls other people unclean, dirty or disgusting, they are working counter to the program of Jesus, and they function, literally, as an anti-Christ. Jesus includes all. He makes a point to go to people whom even religious leaders exclude. Jesus’ people are to include all. If we would emulate the Messiah, we must go and break bread with the most reviled in our society. It’s what Jesus did for us. That’s the good news this week.