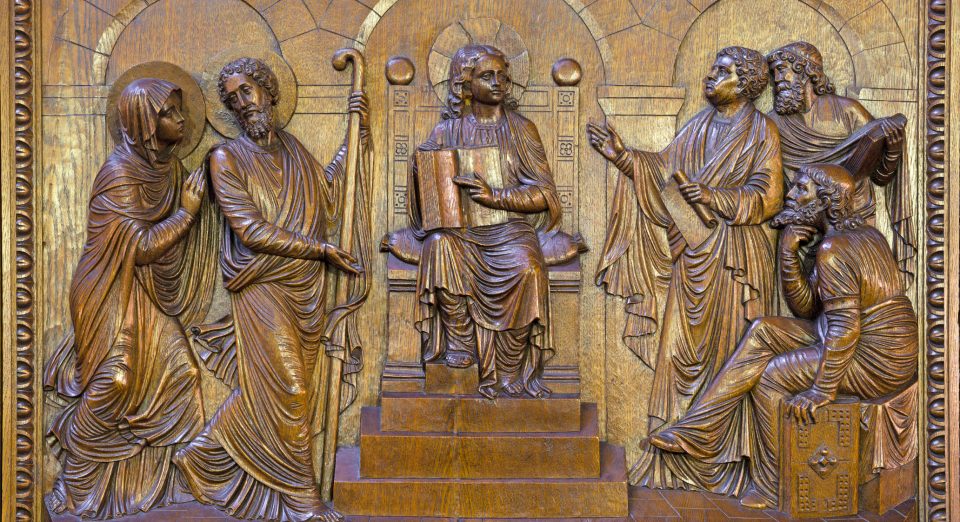 The carved relief of 12-year-old Jesus in the temple (St. John the Baptist basilica by Anton Morman; 19th century).

Both the Samuel and Luke passages this week center around families making yearly trips to the cultic sacrificial site and the outsized roles children played there. This isn’t accidental. The Gospel writer consciously echoes many themes from 1 Samuel to drive home the point that Luke is going to tell the story of God setting up a new anointed leader—not David this time but Jesus.

Consider John the Baptizer pronouncing God’s judgment on those who came out from Jerusalem, particularly on the tax collectors and military police who used greed and coercion to enrich themselves while officially working to keep the temple running under Roman occupation. This sounds a lot like the critique of Eli and the tabernacle priests by the unnamed “man of God” in 1 Samuel: “Why then look with greedy eye at my sacrifices and my offerings that I commanded, and honor your sons more than me by fattening yourselves on the choicest parts of every offering of my people Israel?” (2:29). In both Luke and 1 Samuel, someone from outside the sacrificial system comes to critique the greed being displayed.

Probably the strongest point of comparison is in Mary’s and Hannah’s songs. After divine intervention that led to these two women becoming pregnant, they both sang songs of praise and upheaval. I’m struck by similar themes of exalting/magnifying God, the Lord providing salvation from enemies and, most importantly, the raising up and lowering of people based on humility and pride, respectively. Mary and Hannah both react strongly to their divinely aided conceptions by praising God, particularly for the upheaval of society, casting down the arrogant and raising the humble.

The final comparison is, again, the setting for this week’s Gospel story from Luke: Both sets of parents, Hannah and Elkanah, and Mary and Joseph, went to the sacred precincts for at least one of the pilgrimage festivals (1 Samuel 2:19, Luke 2:41-42) and left their children there. Obviously, Samuel’s stay at the tabernacle was intentional on behalf of his parents, while Jesus’ stay surprised Mary and Joseph, but the similarity stands.

In pointing out that Jesus was a child prodigy in devotion to the sacred, Luke purposefully calls to mind how the prophet Samuel started his service to God at 12 years old and how David as a young shepherd was anointed to be the leader of God’s people.

Imagine the scene: Three times a year, hundreds of thousands of Jews would go to Jerusalem. The city swelled many times beyond capacity as the great pilgrim caravans with thousands of people in each came from every direction. Most people simply camped outside the city gates when they couldn’t rent space in a guestroom. Children ran around and mixed with cousins and friends as their parents talked and prepared for the holy meals. Imagine trying to keep track of one child, much less the seven-ish that Mary and Joseph probably had at this point (see Mark 6:3, Matthew 13:55-56).

Joseph would have taken 12-year-old Jesus and maybe some other family with him into the temple courts to purchase one of the lambs. After waiting in an hourslong line, a priest helped him kill the sheep in accordance with all the laws. As the priest ensured that the lamb’s blood was dashed against the altar, Joseph and his sons got to work removing the sheep’s skin, organs, and offal. They tied the sheep to a metal pole frame, and then waited in another line to use the public Passover ovens to roast their sheep (similar to how Samaritans celebrate Passover today). Once the sheep was roasted, Joseph would have sent a child to have Mary and the rest of the children meet him at whatever place they had prepared for the ritual meal.

This was not the same as Passover seder meals today, which developed into their current form of family meals in the home over several hundred years later. This was a meaty, temple-centric pilgrimage feast that necessitated long-distance travel, long waits, multiple locations, and the knowledge and trust that children would run around in larger caravans from the same region who traveled, camped, celebrated and returned together (Luke 2:44). As Jesus was 12 and their oldest, Mary and Joseph probably worried about him the least—until it was clear that he was missing.

When they found him, Jesus was taking advantage of a custom that took place on Shabbat and festivals when the Sanhedrin didn’t meet and religious courts weren’t in session. Sages would assemble at various places along the ramparts next to the temple walls and listen to people’s questions and provide rulings (BT Sanhedrin 88b, Luke 2:46-47). It’s not clear if the holy family came just for Passover and returned during the festival of unleavened bread. I think this is most likely, but otherwise, there were regular courts at the entrances to the temple mount and the courtyard that Jesus could have visited (also BT Sanhedrin 88b).

Jesus’ questions and answers were clearly impressive to all who heard (Luke 2:47), and he stood out for his devotion to his Father. In pointing out that Jesus was a child prodigy in devotion to the sacred, Luke purposefully calls to mind how the prophet Samuel started his service to God at 12 years old (Josephus, Antiquities 5:348) and how David as a young shepherd was anointed to be the leader of God’s people (1 Samuel 16:1). Finally, Luke says Jesus “increased in wisdom and in years, and in divine and human favor” (Luke 2:52), echoing the earlier description of Samuel, who also “continued to grow both in stature and in favor with the Lord and with the people” (1 Samuel 2:26). Even in his maturing and developing, Jesus echoed earlier patterns.

iJust as God raised up a new kind of prophet and anointed a new kind of king in Samuel and David, respectively, God was raising up a new thing in Jesus, the prophet/priest/king/messiah/savior. It shouldn’t be surprising that God’s work in human history echoes God’s previous work. Rather, we should take comfort that the God at work throughout history continues to creatively redeploy God’s story to work out salvation for God’s people.