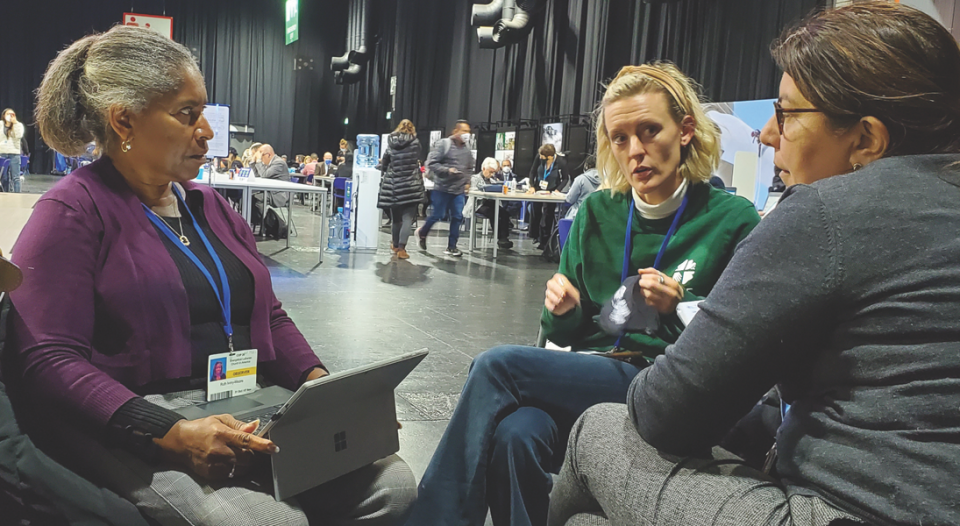 Climate is changing. There is no debate about that. The discussion, instead, stems from what, if anything, humanity should do to combat climate change. To dive into that issue, people from nations and nonprofit organizations descended on Glasgow, Scotland, in November to try to agree on a climate action plan.

As the 26th Conference of Parties (COP26) wound down on Nov. 12, an agreement had yet to be formalized, let alone approved, which sent negotiations into extra time as participants watered down language on how to stop—and possibly reverse—the extreme weather events that can be tied to climate changes.

The final agreement approved on the afternoon of Nov. 13 didn’t have the same ambition the Paris Accords of COP21 carried with it, but it still marked the first time a U.N. agreement acknowledged coal production as a large instigator of climate change, calling for a phasedown of the pollutant, though not a phaseout as originally proposed.

Representatives from individual Lutheran churches throughout the world provided perspectives at COP26, including two dozen from the ELCA. Youth from the Lutheran World Federation also spoke out against the continuing factors that have allowed the global average temperature to reach critical levels.

Ruth Ivory-Moore, program director for environment and social responsibility, led the delegation representing Witness in Society, the ELCA’s advocacy arm. There, meeting with leaders who were part of the negotiations on the agreement, the group pushed dignitaries to look at the world not as a place where climate change will soon impact the environment but where it is currently causing great harm to humanity and creation.

“We speak of loss and damage as if it is some future occurrence. But as a family in Kenya can attest, loss and damage is not a future event, it is occurring now,” Ivory-Moore wrote in an op-ed with Michael Malcom, founder of the People’s Justice Council and a United Church of Christ pastor, just before the conference began.

Indeed, climate change has impacted the world in many ways just this past year. Using federal disaster declarations, the Washington Post found that 1 in 3 U.S. counties experienced the effects of climate change this year. Moreover, nearly two-thirds of the nation endured a multiday heat wave in the summer, with record-breaking heat in regions not accustomed to temperatures climbing into the 90s for more than a day or two all year.

Some of the early successes during COP26 included increasing aid toward developing countries to combat climate change, reaching the $100 billion annual targets after years of falling short of the COP’s 2012 pledge. In 2019, countries were providing only $80 billion.

Unfortunately, as Ivory-Moore pointed out, the aid doesn’t include loss and damage, which are the irreversible losses incurred by climate change or climate-related disasters that require financial investment to repair. It is also inadequate for 2021 as the global temperature average continues to climb beyond that of the projects from 2012.

“In essence, countries like the U.S. are the leaders of this climate devastation,” she wrote. “Developed countries must therefore take the lead in fixing the crisis they have created. They should pay their fair share—that means the investment of developed countries should match the amount of damage that is being done. This is just.”

Delegates were able to attend briefings by high-level officials, learning about what those like John Kerry, special presidential envoy for climate, were doing with specific parts of the negotiations as well as pressing upon them the importance of taking specific actions.

Regina Banks, director of the Lutheran Office of Public Policy–California, mentioned how impactful it was being a member of a faith delegation at such an important event. “As a delegate for the ELCA, I am also really excited to be at this COP to be able to feel the feeling of ecumenical service and interfaith service here in Glasgow. It’s been real,” she said, describing an interfaith gathering on one of the days where they were able to hold space for those who couldn’t arrive because of health, financial or other reasons.

The purpose of attending COP26 and other climate conferences, Ivory-Moore said, is to take a stand not for ourselves but for others.  “Communities of faith should advocate on the behalf of ‘the least of these,’” she said. “Our most vulnerable are us—and our responsibility. We are not too late, but the time is now.”

To learn more about the ELCA’s teachings on ecology and the environment, read Caring for Creation: Vision, Hope, and Justice.