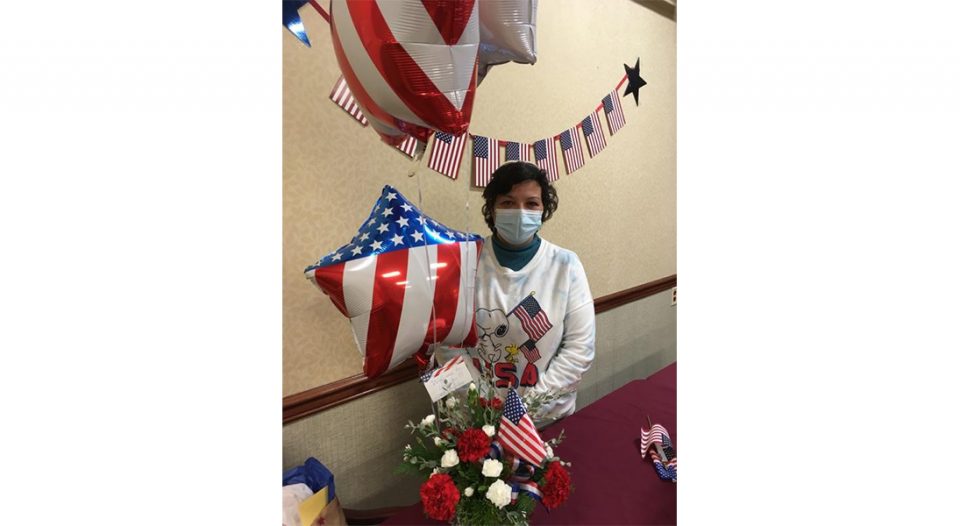 Since age 10, Patricia Vargas has felt pulled toward ministry. Growing up Catholic, she thought her only option for sharing her faith was to become a nun. Then, at 12, Vargas sat in the pews of the Lutheran church associated with the school she attended and heard a woman preaching.

“I thought to myself, ‘Wow! Women can preach and serve outside of a convent? I want to be one of them!’” said Vargas, now an ELCA chaplain serving two senior homes in Marietta, Ohio.

The moment was a turning point in her faith journey, one that would lead Vargas from her home country of Argentina to Nebraska. In the years that followed, she’d overcome great obstacles to answer God’s call and become a Lutheran pastor and U.S. citizen.

A decade after Vargas first saw a woman preach, she was enrolled in seminary, pursuing ministry in Argentina’s Igelsia Luterana Unida (United Evangelical Lutheran Church), when she met Thomas Hallstrom, who served as a pastor of Grace Lutheran Church in Lincoln, Neb. Hallstrom was visiting Buenos Aires, Argentina and had gotten locked out of his lodgings at the Lutheran nursing home Juan Armbruster; Vargas helped him get back inside.

Afterward Hallstrom offered her an internship to serve as a vicar at Grace and even agreed to wait until she had finished studies at Escola Superior del Teologia, a Lutheran Seminary in Sao Leopoldo, Brazil. “I was overwhelmed by his answer,” Vargas recalled. “I knew if I stayed here, I would be the last to receive a call since men have the privilege to receive a call before women.”

Indeed, Vargas said, when she told the president of her denomination about the opportunity, he urged her to forgo the opportunity so he could suggest a male seminarian accept Hallstrom’s offer. She resisted this counsel, eventually securing permission to intern with Grace from the subsequent president.

“My faith in God always was there even in the most difficult and tough time. Prayer has been the biggest influence.”

Vargas arrived in Lincoln in 2001. The transition wasn’t easy, she said, but the experience helped her grow in faith and gain skills for future ministry. She attended her synod assembly and met Joyce Miller, an ELCA chaplain at the Nebraska Medical Center in Omaha. The two connected immediately, with Vargas expressing interest in Miller’s chaplaincy work.

“Because my mother came from [the Philippines] … and I’ve worked overseas and been the stranger, I could see the gifts that Patricia had,” Miller said of their relationship. “So I made the investment that she needed to help her get through the system.”

After completing her internship with Grace, Vargas returned to Argentina to graduate from seminary, then traveled back to the states to pursue clinical pastoral education for the ELCA in Omaha with the support of her home denomination and Miller.

With the blessing of the United Evangelical Lutheran Church, Vargas pursued a call with the ELCA after six years of chaplain studies and much prayer and discernment. The wait proved difficult at first. Then Miller connected Vargas with Ruben Duran, senior adviser for new ministry development in the ELCA. In less than a month Vargas had two congregations asking to interview her for a ministry position.

“We quickly connected as immigrant leaders … especially as she struggled with the strict demands and delays of the visa process in the U.S.,” Duran remembered. In fact, Vargas had to travel home to Argentina to sort out her paperwork before she could serve in her first call. She stayed hopeful nevertheless.

“[There] were difficulties and lots of challenge in my journey to become a pastor in my country and here in the U.S.,” she said. “My faith in God always was there even in the most difficult and tough time. Prayer has been the biggest influence.”

A passion for chaplaincy

Eventually Vargas’ prayers were answered and her paperwork was approved. She went on to serve two ELCA congregations in California, receiving her green card in 2013.

A few years into congregational ministry, Vargas said, she discerned a calling to chaplaincy and began searching for a position in the ELCA. Working with her mentors and synod leadership, Vargas found a call through the Southern Ohio Synod to serve the senior homes Harmar Place and Glenwood Community in Marietta, a role she has occupied since 2017.

As a chaplain, Vargas feels a deep sense of vocational fulfillment. “I extend the love of Christ out into the community and bring the church beyond the four walls to the people that need it most,” she said. “It’s not always been easy, since I’m a Latina woman pastor and that meant [I had] to work harder than white pastors. But that didn’t stop me from persevering and listening to God.”

Of Vargas’ character, Miller noted, “She lived the challenges of being an ordained person of color and woman in the ELCA. For both of us, we’ve received closer to salary justice and work justice by leaving the congregational ministry setting [for chaplaincy].”

In Ohio, Vargas continued working toward citizenship, and on Dec. 7, 2021, she was naturalized as a U.S. citizen.

“I am so grateful to God and to all the people that had helped me to get where I am today,” Vargas said. The seniors at Harmar Place, she reported, held a party to celebrate her accomplishment. “They have nurtured and guided my faith journey as well,” she added.

Reflecting on Vargas’ ministry in the ELCA, Duran said, “Patricia is a detective of divinity always looking to help people see the presence of God in daily, ordinary life. … I believe God called her for such a time as this to be a wounded-healer among us.”

Equal concern for all