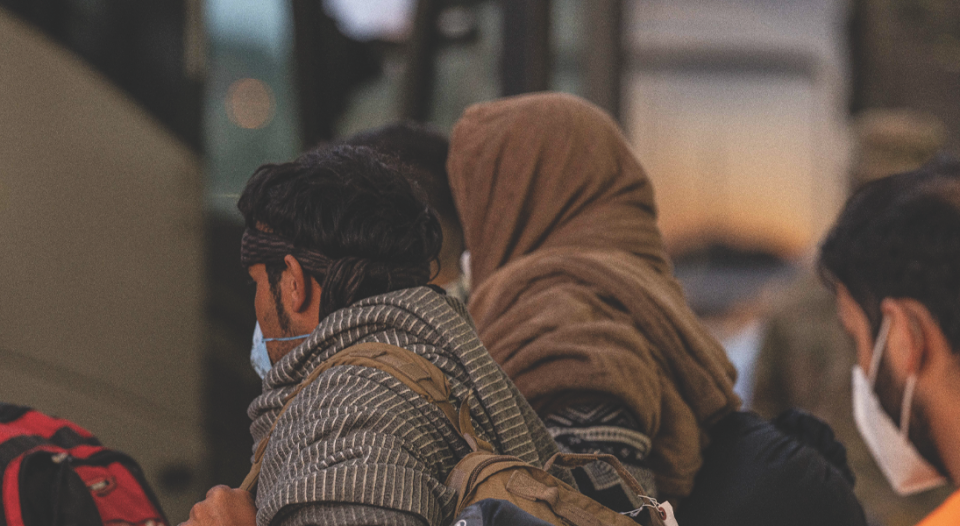 In August 2021, LIRS staff met Afghan neighbors at Washington Dulles International Airport to assist with their resettlement in the United States.

As president of Lutheran Immigration and Refugee Service (LIRS), Krish O’Mara Vignarajah has heard dozens of stories. But one story, connected to the U.S. withdrawal from Afghanistan, stood out—she spoke with an Afghan ally who had caught one of the last evacuation flights in August 2021.

“It was so poignant when he said to me, ‘I’ve never been unemployed a day in the last 20 years. I used to give humanitarian assistance, and now I’m getting it,’” she recalled.

A medical professional who’d served Doctors Without Borders, he was starting over in the United States with LIRS’ help, but he wanted to know how he could help. “These are the kind of Afghans who were on the front lines,” she said. “Even as they face challenges, there’s a willingness to serve.”

Last year U.S. allies in Afghanistan and their families became targets of anti-American violence after the war ended. At press time, the United States had evacuated more than 100,000 Afghans through Operation Allies Refuge, 6,000 of whom are being resettled by LIRS in collaboration with federal agencies and partners from the Lutheran Services in America network.

Vignarajah noted that, given the circumstances of their departure, our new Afghan neighbors aren’t federally classified as refugees (hence language such as “allies” and “neighbors”), but they are just as vulnerable upon arrival. Many have received or are waiting to receive Special Immigrant Visas (SIVs), granted whether they supported U.S. troops directly or provided indirect aid through nongovernmental organizations.

“The lucky ones were able to bring a backpack,” said Vignarajah. “We pray that we can give every family, every child a hero’s welcome.”

“The lucky ones were able to bring a backpack [here],” she said. “It’s important to ensure these families get a roof over their heads, food in their pantries, and access to medical and mental health care. … We pray that we can give every family, every child a hero’s welcome.”

In addition to working at a policy level to secure for Afghans the same benefits refugees receive, LIRS was present on day one of the resettlement effort. Staff stationed themselves at military bases when Afghans started traveling to the States. Upon connecting, the organization helps them acclimate to the culture, learn English, find affordable housing, secure furniture and culturally familiar food, enroll children in school and find employment, a key step toward self-sufficiency.

As of November, more than 48,000 volunteers had committed to help. LIRS has collected goods and funds for allies and continues to recruit foster parents for unaccompanied Afghan children.

“The trauma these families and children are facing is massive,” she said, highlighting that LIRS will launch additional mental health services for unaccompanied minors in the future. “We’re trying to make sure we provide children the care they need to begin the healing process.”

Vignarajah described the Afghan resettlement effort as “historic,” comparing the magnitude of need to that which LIRS experienced when it resettled Vietnamese years ago. This year the demand for services grew so much that LIRS opened a third temporary office in Northern Virginia, one of the main areas Afghans are being placed.

With its education wing closed due to COVID-19, Peace Lutheran Church in Alexandria, Va., began renting space to LIRS in November. “When LIRS made the call in October, the culture of the church was already there to say ‘yes,’” said Sarah Scherschligt, Peace’s pastor. “We take the biblical injunction to welcome the stranger really seriously.”

In the span of three weeks, laypeople and vendors refurbished and rewired rooms to make space for LIRS. The basement became an employment center, and other spaces host language classes or counseling sessions.

“[These are] people who have undergone traumas we can’t possibly imagine,” Scherschligt said. “There is a need for God to heal where humanity has really broken. It’s bigger than the individual stories; it’s also a recognition of the horror of war and what happens when someone has to leave their home.”

Beyond renting space, Peace has an active homework club serving new Afghan residents, begun four years ago in response to community needs. Every other Saturday people learn to drive, fill out forms and, of course, do homework.  Scherschligt hopes the church’s members will foster relationships with Afghan neighbors who pass through church doors in the 15 months LIRS expects to rent from Peace.

“We have a feeling the Spirit is behind all of this,” she said. “I have no doubt in three years I’ll be shocked to see what happens next.”

“It’s a little hard to put into words how heartbreaking [the family separation] is,” said Feeney Francis. “They’re only halfway here. Their hearts are still tied up in Afghanistan.”

In her work resettling Afghan allies for Lutheran Family Services Rocky Mountains, Mary Feeney Francis has seen many Denver area congregations step up to support this cause. Bethany Lutheran Church in Cherry Hills Village and Saint Peter Lutheran Church in Greenwood Village are helping two Afghan families move into their new apartments and file paperwork for their SIVs. Bethany will also enroll in preschool a 4-year-old from the family the congregation is supporting.

“It’s inspiring and encouraging to see the numbers of churches who are really stepping up to look out for Afghan individuals and families,” Feeney Francis said. “They are living out their values and demonstrating the love of Christ to [newcomers].”

As LFSRM’s volunteer and community engagement coordinator, Feeney Francis has witnessed firsthand how difficult resettlement can be. One client who had received death threats from the Taliban before his evacuation was so stressed that he couldn’t retain the information needed to reacclimate.

Because of his service to the United States, his wife is eligible for and should receive an SIV, but it has yet to be processed, Feeney Francis explained, due to abnormal wait times. Thus she was unable to evacuate with him and will be at risk while she waits to join him in the States.

“It’s a little hard to put into words how heartbreaking [the family separation] is: everyone has left family behind, everyone is freaked out about families,” she said. “They’re only halfway here. Their hearts are still tied up in Afghanistan.”

She wants ELCA members to know that, even months removed from the August evacuation, Afghan departures continue and there’s plenty of opportunity to provide hope to new neighbors.

“Afghans are some of the most hospitable people in the world—Americans have a lot to learn from [them],” Feeney Francis said. “Anyone who has the opportunity to join a co-sponsor team is going to get more out of it than they give.”

How you can help

“We’re grateful for the generosity we’ve seen so far. It’s only a fraction of what’s needed to set these families up for success,” Vignarajah said. “We know that this work cannot be done by a resettlement agency alone. It involves community participation.” She suggests that congregations join LIRS’ Circle of Welcome program, which includes co-sponsoring a refugee individual or family. Opportunities to donate, advocate for or volunteer in another capacity to support Afghan allies  can be explored at lirs.org/help-our-afghan-allies. Financial support for the “Afghan Humanitarian Crisis” can be given at elca.org/ldr.