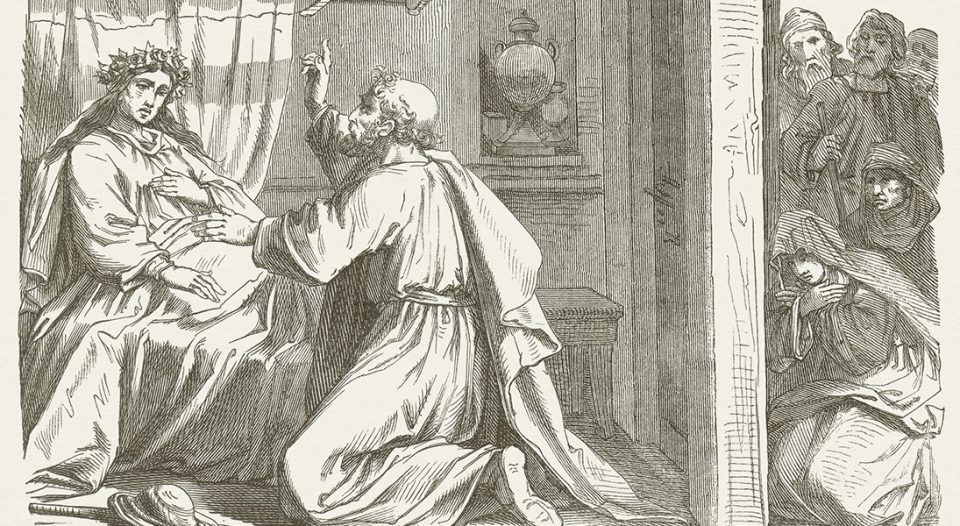 This question has vexed people for ages: “If God can heal people, why doesn’t God heal everyone?” The book of Acts, like the Gospels, contains many stories of people being healed, with some even being brought back from the dead. But there are also stories of people meeting horrible ends. Why doesn’t God heal everyone? Why doesn’t God spare everyone from death? This short essay isn’t going to solve an issue that has been debated for thousands of years, but it is worth focusing on our question to see if we can discern why God resuscitated Tabitha.

Tabitha, whose name can be interpreted as Dorcas, or gazelle, was by all accounts a lovely woman who was full of kindness and charity (Acts 9:36). She made garments for widows (39) and was beloved of the church in Joppa. Most importantly, she was a disciple of Jesus. Like other women of means who were disciples (Mary of Magdalene, Joanna, Susanna in Luke 8:2-3 and Lydia in Acts 16:11-15), Tabitha used her resources to take care of others. But as happens, she grew sick and died. It’s not explicit in the text, but I interpret the church’s response to her death to mean that she was a younger woman. Death was a shock and an injustice. The church didn’t perceive her as old and full of years but as someone who should still be alive!

The church in Joppa then sent for Peter, who was about 15 miles away in Lydda. He was performing miracles right and left, and Tabitha’s friends were hoping she would receive one too. Yet, they still carried out the normal behaviors associated with a death and prepared her for burial (37). They knew, as we do today, that sometimes God grants a miracle and sometimes does not.

Peter was brought to the home where Tabitha’s body was resting. The widows were quick to tell him how they had benefited from Tabitha’s kindness and skills with textiles. According to the text, this is the first that Peter has heard of her generosity and charity because the two men sent to fetch him merely told him to hurry (38). But Peter didn’t come to raise Tabitha because of her charity. Instead of listening to evidence of her righteousness, he sent the widows out (40). I don’t think he only healed righteous people. I know Jesus didn’t come to heal only righteous people.

Peter prayed and simply told Tabitha to get up. She opened her eyes, saw Peter and sat up. I wonder about the depth of the previous relationship between these two disciples. Were they close? Did they even know each other among the scores of disciples that Jesus had attracted during his earthly ministry? In any case, Tabitha seems to have taken her resuscitation in stride, neither asking Peter who he was nor how she was alive again. I imagine she woke up, saw Peter and thought back to the times that she had seen Jesus bring people back from the dead. Had she always wondered what that experience would feel like? Now she knew!

Peter, ever the gentleman, offered Tabitha his hand, helped her up, and presented her to the saints and widows who loved her so much. I think this is the key for understanding why this miracle happened. Tabitha was, by all accounts, a wonderful, holy person. But so was Stephen, whom Paul lynched. Tabitha blessed the Lord and the church with the news of her life from death. Stephen blessed the Lord and the church with his faithfulness in death. Sometimes bad things happen to good people. And sometimes amazing things happen to lovely people.

We should look less to the merit of individual humans and more to the signs of the kingdom of heaven. Tabitha was a kind, generous pillar of her church. And she got sick and died. Peter came to her side, and Jesus resuscitated her, not because of who she was but to point to who God is—the one who conquers death and brings life.

Moses as a leader