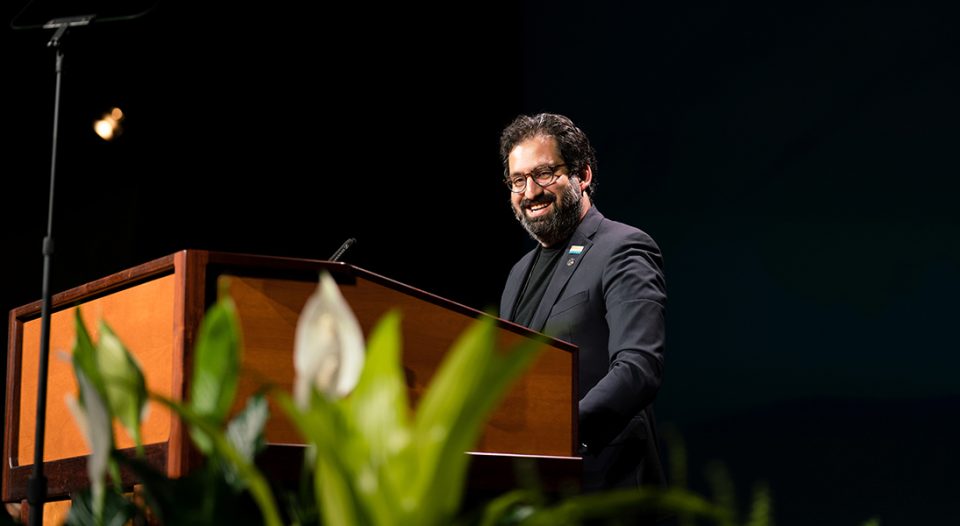 Imran Siddiqui, a senior investigator for the U.S. Department of Labor, was elected vice president of the ELCA on Thursday, Aug. 11, becoming the first Asian American elected to the national post. His six-year term will begin Nov. 1, replacing interim Vice President Carlos Peña, who himself took on the role after the unexpected passing of Bill Horne in 2021. Siddiqui was elected on the fifth ballot during the Churchwide Assembly in Columbus, Ohio.

The vice president is the highest-ranking lay leader of the denomination, overseeing the ELCA Church Council and serving as one of four leaders of the church. The first-generation American currently serves as vice president of the Southeastern Synod, representing Georgia, Tennessee, Alabama and Mississippi.

“It doesn’t feel real,” Siddiqui initially said of his election. “When I first thought about this and I put my name in, I was thinking, ‘Well, you know, on the pre-identification form there will probably be 50 or 60 people doing it,’ and it came out that there were 13. And I thought there’s a good chance I’m going to be in the top seven, and that’s as far as I thought.”

Fifty-six candidates appeared on the first ballot, which was composed of the initial 13 nominees prior to the Churchwide Assembly and the 43 who were nominated during the first day.

The voting process began Tuesday morning during the first plenary session. Each voting session began with a Taizé-like hymn sung a capella followed by a prayer for God’s guidance for deciding who will be the next lay leader of the church. Voting members nominated all the candidates, including those who filled out the nomination forms prior to the assembly, during the first ballot. Tracey Beasley, a member of Reformation Lutheran Church in Philadelphia, received the most votes on the first ballot, with 135 votes. Before the second ballot 25 people removed their name from consideration.

After the second ballot, the seven remaining candidates were Beasley, Imran Siddiqui, Roberto Lara Aranda, Carla Borchardt, John Auger, Paul Archer and Clarance Smith. The seven addressed the voting members on Wednesday afternoon preceding the third ballot, where the threshold to win election dropped from 75% to a two-thirds majority.

“It’s hard to comprehend. I became a Lutheran 11 years ago.”

Siddiqui, a member of St. John Lutheran Church in Atlanta, acquired the most votes after the third round with 297—251 votes shy of election, with Beasley slipping to third and Lara Aranda sandwiched in between the two. The three, all people of color, entered the fourth round of balloting, which included a brief forum at the Thursday morning session. Each of the three nominees spoke on the work they intend to bring to the Church Council, the awareness of the time they must bring to this volunteer position, and the ways in which they can bring collaboration and cooperation as the lay leader of the church.

After the fourth vote, Siddiqui fell 39 votes shy of election with 443 votes while Lara Aranda, a member of St. Peter Lutheran Church in New York, remained in second with 228, and Beasley missed out on consideration for the fifth vote. The last vote of the Thursday session required a simple majority, where Siddiqui secured 550 votes out of the 814 total cast, securing the election and a standing ovation from the body.

“Holy crap, y’all! This is surreal,” were his first words after being elected. He thanked his family, his wife, Kendall (whom he met at St. John); Beverly Shaw, the pastor who encouraged his growth into church leadership; the other nominees who stood alongside him during the forum and the initial statements the day earlier; the other synod vice presidents for the hard work they do as lay leaders; and the assembly.

“I thank you for your faith in me; I will try not to let you down,” he said.

Siddiqui mentioned that while there was a bit of a “freak-out moment” with being the highest-ranking layperson in the ELCA, he sees the role as more than just being an elected official but a role among other leaders.

“It’s hard to comprehend. I became a Lutheran 11 years ago and now I’m supposedly the highest-ranking layperson in the church,” he said. “That’s what the role is, as they say. But, in practicality, I chair the Church Council and on the Church Council there are a number of laypeople. The way I see leadership is more of a collaborative way.”

He harkened to his experience as the vice president of the Southeastern Synod.

“I may be the one who decided what moved on in the agenda, but it was far more of a collaborative effort,” he said.

During his initial speech to the assembly, Siddiqui spoke of his journey to the ELCA, his love of liturgy and the Lutheran focus of God’s grace, being a member of St. John for the past decade and how he sees society being deeply divided.

“We refer to each other as immoral, evil, un-American, un-Christian.” Siddiqui spoke without singling out a side or person, talking instead about the overarching problem of demonization toward those we disagree with. He said he was confused about how anything could get done if everyone had to agree on a single position or issue. Serving on the synod council, he watched how consensus-based decision making can help navigate beyond needing to be on the same side and instead finding a common place where the group can move forward.

“When we listen to each other, we found that we made room for the Holy Spirit, allowing God’s grace to work to provide holy consensus on our decisions. What a model for the world.”

Siddiqui thinks there are ways to increase the conversation, both at Church Council and throughout the ELCA.

“It kind of goes with if folks trust each other … to allow people to have a voice and speak about things, and then to be open to letting everyone in the room be a little happier. If everyone in the room can have ownership, it’ll be helpful,” Siddiqui said. “It’s a discussion I’m willing to have.”

During his interaction with the assembly, Siddiqui talked about balancing work and family, acknowledging that he will hold true to that concept if elected. After his election, he spoke more about how the acceptability and increased frequency of virtual meetings because of the pandemic enables him to do more than he would’ve been able to do in the past and still maintain his family’s dedication to equal parenting.

“When we listen to each other, we found that we made room for the Holy Spirit, allowing God’s grace to work to provide holy consensus on our decisions. What a model for the world.”

“There are definitely in-person things,” Siddiqui said, referencing the many events ELCA leadership holds throughout the triennium between churchwide assemblies. “But you don’t always have to be physical to do things. There are multiple ways in this world where things can be done in ways that don’t require travel every weekend.

“It’s something that, I think, is important in terms of what are we asking folks in this church to do. I have a family, bishops have families. A lot of bishops we are electing are younger, and they have small kids. To ask those folks to travel all the time actually limits the pool of the folks we can call as bishop. They pull their name and say, ‘I can’t do this.’

“So, I think that, in some ways, we’ll have to see what, exactly, is the schedule and then pick and choose those things that can be done virtually as opposed to necessarily be done in person.

“There is something to be said for actually trying to go out and reach other people. I think it’s important that we speak about God’s grace. That’s what drew me, that’s what has drawn other people, about how amazingly overwhelming God’s grace is … but we do have to try our best to live into what that means. We should try to be a church of overwhelming grace, so that our words match what we’re doing. That’s probably a process, as well, but if we’re able to, over the next five years, do a reconstitution convention, we can look at how our church body represents God’s grace in a way that we feel [Martin] Luther believed in God’s grace.

“The thing that is so revolutionary about [God’s grace] is the idea that it is something subtle across several of the Christian denominations when they talk. But what Lutheranism and the ELCA, at least in my church, have really hammered home is that it’s not about what you’ve done or how you think of yourself. It’s that God loves you just as much as God loves anyone else. You could be anybody. You could believe you’re unforgivable, but you’re not unforgivable. There is nobody that is outside of God’s love. It’s such an amazing feeling to know that you don’t have to worry. That God loves you and God will pick you up regardless of how many times you fall, and that God loves you as much as anybody else. That’s an incredibly powerful thing.”

Siddiqui was installed during the final worship service of the four-day assembly, which included a prayer led by Secretary Sue Rothmeyer with intercessory response from the voting members and church leaders. He will spend the next two months preparing for when he officially takes office.