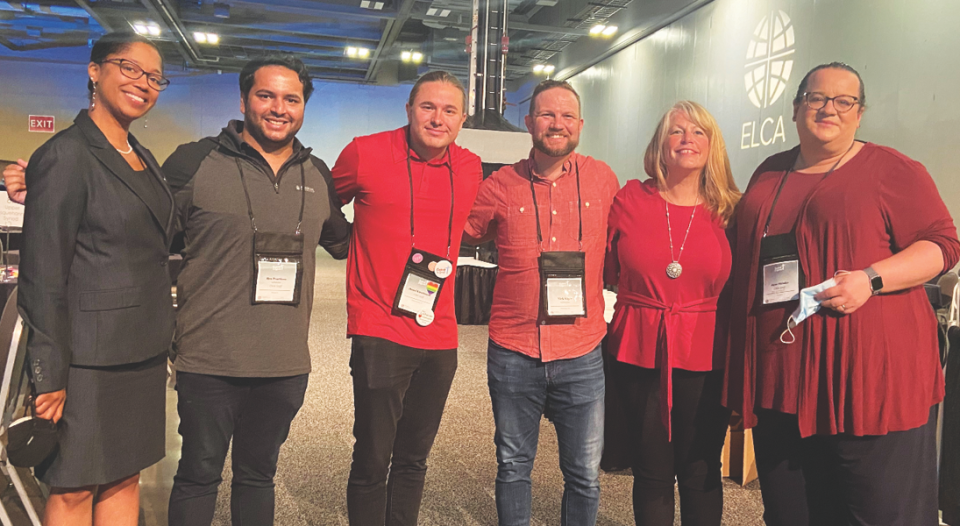 Iain Chester wondered how members of Gen Z experience meaning and purpose, and what those answers mean to the ELCA.

Chester and Nagaro were among 25 churchwide organization staff members who came together for 12 months to work in small groups outside their normal areas of expertise and take up issues and challenges facing the church.

The new initiative, called the Collaborative, aims to identify projects or concerns to tackle in the ELCA’s goal of engaging 1 million new, young and diverse people.

“We wanted participants to say what in the organization we could improve upon,” said Kimberly Robinson (formerly Kimberly Jackson), ELCA director of leadership development who helped create and served as co-convener of the Collaborative. “We also wanted them to move a little more quickly to move projects forward.”

For Nagaro, the Collaborative was a chance “to stay close to a world that’s changing and come into a world of people with fresh ideas.”

The small-group design of the Collaborative meant that leaders were working with new colleagues on projects and hearing voices and ideas they typically hadn’t. For Nagaro, a 30-year ELCA employee and senior director of planning and product management, participation in the Collaborative was a chance “to stay close to a world that’s changing and come into a world of people with fresh ideas.”

Listening to new voices, he said, taught him that he needed to be open to others’ views but without dismissing his own perspective.

Nagaro’s group worked on a grant program for congregations exploring digital ministry after worship and other activities moved online during the COVID-19 pandemic. He said the groups were able to “reach out beyond Chicago,” asking questions of those who might benefit from grants to fund internet access or equipment.

“We were able to see how we can jump over hurdles, and how putting people together can lead to impactful solutions,” he said.

Each member of the Collaborative worked on three or four projects during the group’s time together.

Collaborative members were also able to suggest projects. Chester, ELCA executive director of innovation, proposed that a group discuss what to do with a recent study on the behavior and beliefs of Gen Z (people born between 1997 and 2012).

Chester said study participants reported finding a sense of belonging outside the church, but he wanted his group to process more of the study’s findings and discuss how that generation might find belonging within the church.

The Collaborative, Chester explained, was able to tap ELCA staff who work in different areas, making connections across systems and asking advice of those who might not normally be consulted.

A seven-year veteran of the ELCA, Chester said he’s grown personally because of his work with the Collaborative. He said it’s also given him the opportunity to build a network of people he can call on for future projects, and taught him core project management skills.

Collaborative members not only worked together in small groups but came together for training, said Robinson, who co-convened the Collaborative with Louise Johnson, ELCA executive for administration, and class of 2022 participant Alex Baird, ELCA senior manager of communications and marketing.

“It’s been refreshing to see the excitement around the Collaborative,” Robinson said. “When you look at the work we do with a different lens—with diversity of thought—and the recommendations coming out of some of these groups, we’ve been able to tap into a newer, younger and more diverse perspective, and have an openness to that perspective.”

Now that the first Collaborative class has graduated and candidates have been nominated for the second—which will include members from outside the churchwide organization—there are lessons to be learned from the first round, Robinson said.

The first Collaborative had a framework and timeline guiding it, Robinson said, but not all group projects for the quarterly sessions were defined upfront, which may initially have intimidated the participants. “We were building as we climbed,” she explained.

Eventually participants got the chance to suggest projects. Now, Robinson said, this interest in new perspectives has started to spill over into the more routine work of the ELCA.

Robinson believes that, just as the ELCA benefits from new perspectives, the Collaborative enables its members to discover new gifts. “You might not be a grant writer or write curricula,” she said, “but [through the Collaborative] you got the chance to see what other gifts you have.”

Forming leaders: Then and now