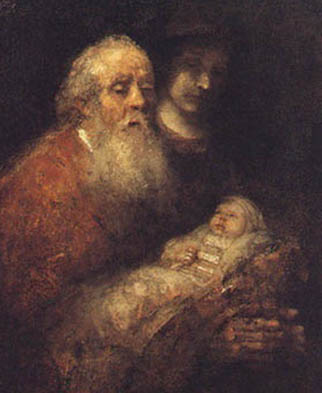 The Song of Simeon.

Now there was a man in Jerusalem whose name was Simeon; this man was righteous and devout, looking forward to the consolation of Israel, and the Holy Spirit rested on him. It had been revealed to him by the Holy Spirit that he would not see death before he had seen the Lord’s Messiah. Guided by the Spirit, Simeon came into the temple; and when the parents brought in the child Jesus, to do for him what was customary under the law, Simeon took him in his arms and praised God, saying, “Master, now you let your servant depart in peace, according to your word; for my eyes have seen your salvation, which you have prepared in the presence of all peoples, a light for revelation to the Gentiles and for glory to your people Israel.”

And the child’s father and mother were amazed at what was being said about him. Then Simeon blessed them and said to his mother Mary, “This child is destined for the falling and the rising of many in Israel, and to be a sign that will be opposed so that the inner thoughts of many will be revealed — and a sword will pierce your own soul too.”

There was also a prophet, Anna the daughter of Phanuel, of the tribe of Asher. She was of a great age, having lived with her husband for seven years after her marriage, then as a widow to the age of eighty-four. She never left the temple but worshiped there with fasting and prayer night and day. At that moment she came, and began to praise God and to speak about the child to all who were looking for the redemption of Jerusalem (Luke 2:25-38).

Simeon is asking to die.

That’s something that is easy for us to miss. The words of his “song” are so beautiful — “now you let your servant depart in peace” — that it’s easy to fail to catch that to depart, in this case, means to die.

Or perhaps the rest of Simeon’s speech is about such wonderful things — salvation for all people, God’s promises kept, light and glory — that it’s easy to overlook those first words about dying.

Or maybe we just don’t want to talk about dying — and certainly not in connection with the birth of a baby — that we intentionally keep our focus on the light and glory.

But there it is: Simeon is asking to die. He is ready. He is willing, perhaps even eager.

Because he has perceived in this baby confirmation that God has kept God’s promises. That God is faithful. That God has remembered Israel — and the rest of the world (Gentiles) — and him.

And that makes all the difference. Knowing that God is faithful and that God remembers him diminishes the terror of death. I can’t say that it takes away that fear entirely, but instead replaces it with a courage born of the knowledge that wherever we may go at the end of this life, God goes with us. God has not forgotten us. God is faithful.

How many individuals, I wonder, on this very day are near the end of their lives? God is with each and every one. How many people do you know who live in the shadow of death … or illness or fear or depression? God is with each one. And whatever else we may do to ease their struggle, we can pray for them and we can share with them God’s promise to be with them in this life and bring them through to the other side.

Simeon is ready to die. Not from a sense of resignation or failure but because in this child he has been reminded of God’s indefatigable commitment to be with us and for us forever.

Prayer: Dear God, remind us of your promise to be with us, and use us to share that promise with others, especially those near to death. In Jesus’ name, Amen.

David Lose
David Lose is president of the Lutheran Theological Seminary at Philadelphia.