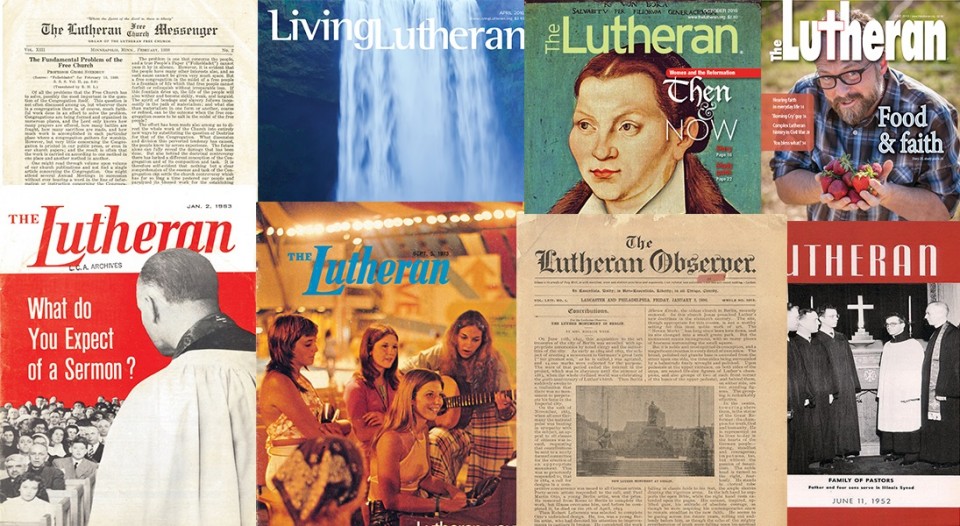 The Lutheran, in its various forms, has a long history.

German. Norwegian. Danish. Swedish. In the early and mid 1800s, you didn’t need to speak English to remain abreast with the happenings of the Lutheran church. At that time, the church published myriad magazines that catered to a diverse body of non-English-speaking congregations. Although these congregations didn’t always share a common language, they undoubtedly shared a common creed.

Even in its earliest, fragmented format, the predecessor magazines of The Lutheran played an important role—to spread the news of the church and share the gospel with its members. The Lutheran Observer, which began publishing in 1831, was one of the first forms of Lutheran news in the U.S. Several decades later, there were more than five magazines, some of which catered to smaller Lutheran denominations. The Lutheran was one such magazine, which was established in 1860.

“At the same time, we tried to present what the church was, not only to ourselves, but to the rest of the world.”

Throughout its history, The Lutheran has served as a way not only to communicate news about the church, but also to share what the church was doing across the country and around the world.

“We brought the world to the readers—the world as we see it through the eyes of the gospel,” said David L. Miller, editor of The Lutheran from 1999 to 2005. “We wrote articles from around the world in the 100 or more countries where the ELCA and the Lutheran World Federation had an impact—places where there are few resources, corrupt governments, unclean water, little to eat, places where the church’s work made a life and death difference.”

“The magazine challenged us to think about our world, our church and our congregations differently, but to also see the similarities in people, institutions, churches and congregations—to see where we are the same,” she said. “The Lutheran inspired congregations and individuals to live out the good news in new ways.”

When it comes to social issues, the magazine was known for taking a bold and transparent stance, reflecting the church’s commitments to the gospel and confronting church and society’s most pressing challenges.

“During my time as editor, we were just coming into an understanding of women’s ordination, issues related to abortion and, of course, we had issues related to racism in the ’60s and other social concerns,” Trexler said. “I reported frequently on ecumenical efforts.”

Even in its earlier formats The Lutheran’s predecessor publications covered social topics such as prohibition and Hollywood films.

“The [earlier publications] were frequently in favor of the temperance movement and prohibition,” said ELCA archivist Joel Thoreson. “The Lutheran Observer often included a page under the heading ‘Temperance and Reform’ in its 1897 issues, and The Lutheran Standard published an article in 1924 against the movies.”

While the topics varied in scope and evolved along with the church, the magazine remained committed to covering issues that were most important to the ELCA.

“I made sure we were a magazine that had some nerve and backbone when we needed to,” Trexler said. “But we always made sure that what we were publishing was consistent with the major concerns of the church itself—to address the issues that the church was passionate about.”

Looking to the future

Throughout the years the magazine’s overall character and editorial content has been consistent. During its long tenure, however, The Lutheran has weathered several challenges in the midst of change. Surviving the digital age was one such challenge.

When the ELCA was first established, the magazine circulated to 1.2 million members, 18 times a year. The goal was to reach every ELCA household.

“Every family was to receive a copy for free,” said Daniel J. Lehmann, editor of The Lutheran from 2005 to February 2016. Several years later, amid the dawn of the Internet, the magazine adapted its circulation strategy. Its original goal remained intact—to reach as many members as possible.

“We were one of the earliest church magazines to go online in 1995,” Miller said.

Now, more than 20 years later, the magazine looks to reaffirm and reposition its place in cyberspace. With a focus on widening its digital presence, the magazine, now titled Living Lutheran, hopes to continue furthering its reach.

“With a new name and enhanced website, Living Lutheran will continue to be a consistent voice both in print and online,” said Jocelyn Fuller, ELCA director for strategic communications and interim editor and director for publications. “We are excited to provide our readers with more opportunities to connect, allowing for a deeper relationship with us.”

While the magazine has witnessed a great deal of change throughout its history, the stories have always played a vital role in connecting the entire church body to each other and the world. Living Lutheran will continue that legacy. “Storytelling is what we love to do, and we feel blessed to tell the world the stories of the ELCA,” Fuller said.