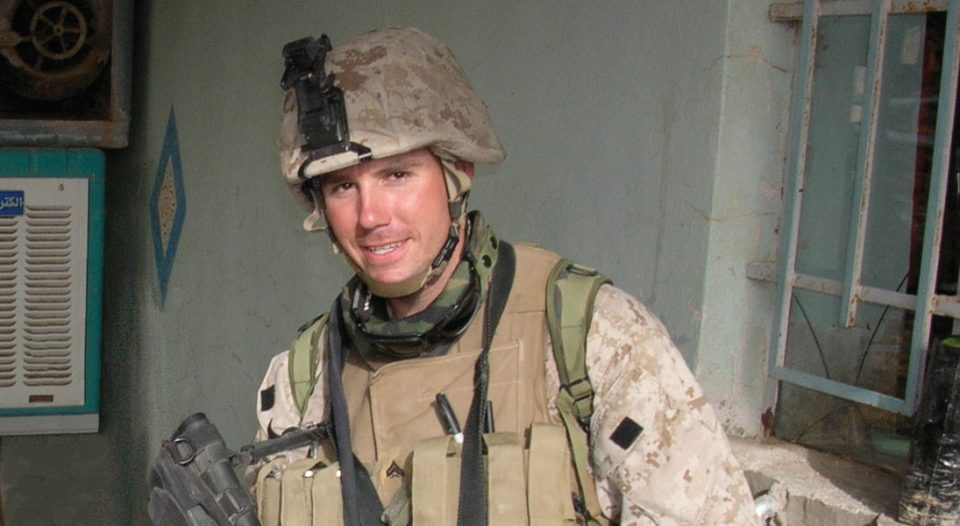 While deployed to Al Anbar Province in Iraq with the 3rd Battalion, 25th Marines Infantry Regiment in March 2005, Nathan Huffman had an experience with a Lutheran chaplain that led him to seminary.

While deployed as a Marine in Iraq in 2005, Nathan Huffman received a visit from a chaplain that would ultimately change his life.

“He came to me and he asked me how I was doing,” Huffman said. “[I gave him the] ‘I’m fine’ typical Marine response. But he knew I wasn’t.”

When the chaplain pushed for a real answer, Huffman divulged he hadn’t received communion in over a month due to combat readiness. So the chaplain brought out his communion kit and offered Huffman the sacrament.

“That night I went out on patrol,” Huffman said. “It was a really, really difficult mission. I felt very confident that I was going to die that night. It felt spooky; I felt like I was being watched. We were all terrified. But after receiving communion, I felt at peace with dying, and I felt confident.”

It was a rough tour, the now 37-year-old retired reservist remembered. His unit lost 46 Marines and two Navy corpsman that year, and he was directly engaged with the enemy during Operation New Market.

That night nothing magical happened, Huffman said. He doesn’t believe God stepped in and made his enemies’ weapons malfunction. “There was no angel on my shoulder. … I just felt confidence, and I wasn’t afraid to die. It wasn’t because I was so brave, it was because I was confident in Christ. I knew that whatever happened that night, I was going to be OK. [And] nothing happened. … We went out that night; we came back in.”

Huffman, now a husband and father of three, is the son of an ELCA pastor. His father, Jim, is now retired.

While Huffman always maintained his strong faith in God, he wasn’t certain pastoral leadership was in his future. “As a pastor’s kid, you never want to do what your dad did,” he said.

In fact, Huffman first served with the Richmond [Va.] Police Department for nearly nine years, with some of that time overlapping his seven years in the reserves.

Still, the experience he shared with the chaplain in Iraq got him thinking. But it wasn’t until 2011 that he and his wife started talking seriously about seminary—and chaplaincy.

Huffman had started an ultramarathon fundraiser—a relay run from Richmond to Washington, D.C.—to support veterans’ organizations. Over the years it turned into a second job. With little time left for family, something had to change.

“I talked to [my wife] about seminary. … She knew I felt called to help other veterans or other people in the military … who were really suffering because others had helped me, and my faith had been a large part of that,”  he said.

Huffman ultimately was accepted to the Chaplain Candidate Program with the intent of becoming a Navy chaplain. Turns out this is common: research shows that two-thirds of active chaplains had prior military experience, said Eric Wester, director for ELCA federal chaplaincy ministries.

Before candidates can enter a specialized ministry like chaplaincy, they must have three years of pastoral experience. Huffman will spend his time at St. Michael Lutheran Church in Virginia Beach, Va., working alongside Stephen Bohannon.

Huffman’s experience will be an asset since roughly half of parishioners are former or current military. “[We’re] in a community that has a strong connection to the U.S. Navy and armed services,” Bohannon said. “So he immediately has a connection with our population and has spoken about his sense of call—coming out of the situations he’s been in, in both the military and police work and dealing with the human dynamics in life in the most difficult situations, [he was] hearing God’s call. We’re excited about that.”

Whether Huffman decides to pursue chaplaincy after three years is a conversation for a later date, he said, but he hopes to continue his call at St. Michael until his gifts are no longer needed there. “This is a chance to do what I’ve always wanted to do, I just won’t have the uniform,” he said. “And that’s fine with me. I’m not concerned about the uniform.”

In many military communities it’s not uncommon for active or even retired military personnel to attend chapel on base because they find that chaplains are trained to address their unique needs. “Pastors are not trained for [this type of service] very much because those are needs that you don’t find in congregations overall,” Huffman said.

As a pastor with a military background, Huffman has credibility among those who have served.

“One of the reasons I went to seminary is I started getting phone calls—especially when I started doing work for nonprofits for veterans—[where people asked me], ‘How do you still believe in God after what we’ve seen together?’ ” Huffman said. “They wouldn’t go to a pastor to ask that question.”

So why does Huffman still believe in God?

“For me, after what I’ve seen and what humanity is capable of, the only way I can reconcile that the world still spins around is there has to be a God,” he said. “We could have killed each other off years ago … . I’m a greater pessimist [than many]. I don’t believe the world could continue to live without God.”

Huffman’s genuine faith, coupled with his down-to-earth, approachable attitude, is one of his greatest gifts, his father said.

“There is no difference between Nathan the man, Nathan the cop, Nathan the Marine, Nathan the seminarian-awaiting-ordination. He’s the same guy. There’s a holistic sense [of who he is],” Jim Huffman said. “This guy has heart and faith that is a part of who he is.”