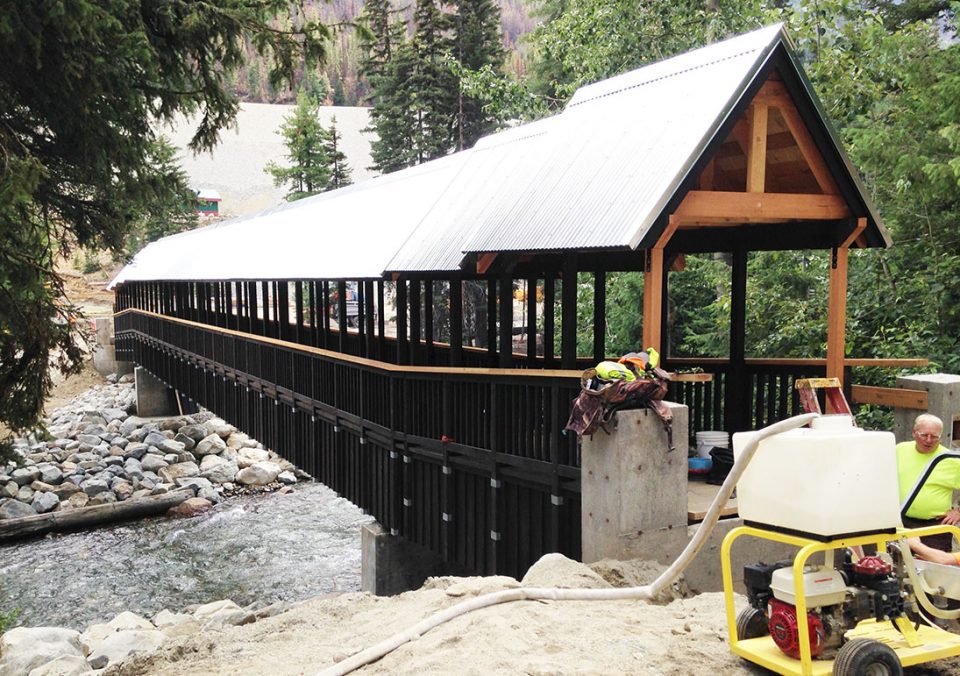 Last fall the area surrounding Holden Village was damaged by the Wolverine Fire. Now staff, contractors and visitors are helping rebuild. A new 100-year bridge across Railroad Creek replaces one that was rotting. Its interior was designed to resemble the 55 miles of tunnel inside a copper mine that operated there.

If you think the fabled Holden Village looked good then, wait until you see it when it reopens in November.

Nine members of Bethany Lutheran Church of Bainbridge Island became “Forerunners” at the Lutheran retreat center above Lake Chelan in eastern Washington from July 17 to 23. They took part in various improvement projects while Holden Village is closed after last year’s ferocious wildfires and a massive environmental remediation. The Bethany group is one of nine Forerunner groups at Holden this summer, named for the original Forerunners who worked to convert Holden from a copper-mining town to a retreat center early in the last century.

Gail Christensen planted beautiful landscaping along with Gwen Howard. Chris Christensen and Colleen Chupik organized music and removed decades’ worth of spilled candle wax from the massive stone altar in the Fireside Room. Paul Stumme-Diers, a pastor, helped lay pavers in the garbage shed. Steve Chupik and Steve Christensen helped paint the bowling alley but took on other tasks as well. Dave Christensen was the village electrician.

“I was struck by the vibrancy and variety of plants that are thriving among the fire-blackened dead tree trunks,” said Chris Christensen. “And the same holds true for the construction projects at Holden—the work of building vibrant community goes on.”

Some of the big projects at Holden Village include a new 100-year bridge across Railroad Creek, new stone paths, walls and gutters, an improved hydroelectric power plant and new paint everywhere.

The Bethany group got up early, worked hard until 2:30 p.m., then spent the rest of the day listening to speakers, such as Barbara Rossing, a professor at the Lutheran School of Theology at Chicago, talk about heaven, or received  regular updates on the upgrade projects at Holden Village. Like all the Forerunner groups, Bethany’s took part in workshops to weave or sew, sang in the choir, and slurped Holden tea with new friends. They worshiped in the evening and hit the sack early to be ready for the next day.

“The Forerunner project has brought in people new to Holden from all parts of the U.S.,” said Howard. “Working together is a wonderful way to get to know [other Lutherans].”

Friday was the free day. Most hiked to Hart and Holden lakes. A few stayed in the village, chasing mother bears with their cubs out from around the buildings and back into the wilds.

Holden Village is surrounded on all four sides by fire-blackened hillsides that stretch for miles. The fire in 2015 raced right to the village’s edge. It was nothing less than a miracle that Holden Village was spared. Tender green growth now is sprouting up, with the promise that the forests someday will return. But there are few birds.

“Fire is an important part of the ecology of a forest,” Dave Christensen said. “It looks devastating, but it really is a renewal. The cones on a Lodgepole pine will open only from the heat of a fire.”

Staff members who so valiantly defended Holden Village have put exhaustion aside and are forging ahead to November. Holden Village typically has several hundred guests during the summer; a fraction of that in the winter.

The Forerunner groups shared Holden Village with the hardworking women and men of Rio Tinto, a global mining company charged with the environmental cleanup of the Holden Mine, which operated for only 19 years before closing in 1957. Each morning before most of the Forerunners woke up, a dusty white bus took the Rio Tinto crew members over to the remediation site, where they worked 12-hour shifts. The goal of the half-billion-dollar project is to improve any water that seeps out of the hillside to drinking-water purity. The work includes injecting cement-like chemicals into the hillside to prevent particulate left over from the mining from seeping into Railroad Creek. A thick layer of rock is being applied over the mile-wide site. Soil and 90,000 trees will cap the project.

A Rio Tinto dining contractor fed the Forerunner groups, and the Bethany group marveled at the craftsmanship of other smaller contractors improving the Holden grounds—masons making gutters and walls, and landscapers crafting beautiful paved paths.

After last summer’s hot, dry weather, the heavy rains, lightning and thunder that sweep across Holden Village were welcome. Cool gray days made it easy to work, and hot sunshine accompanied the bus down to Lucerne on Lake Chelan as the workers boarded the boat home.

“Amid blackened tree trunks and stump fragments bloomed fireweed—bright pink! And the promise of 90,000 trees that will be planted on tailing piles; I’m eager to see it,” Colleen Chupik said. “Themes of rebirth and renewal abound.”