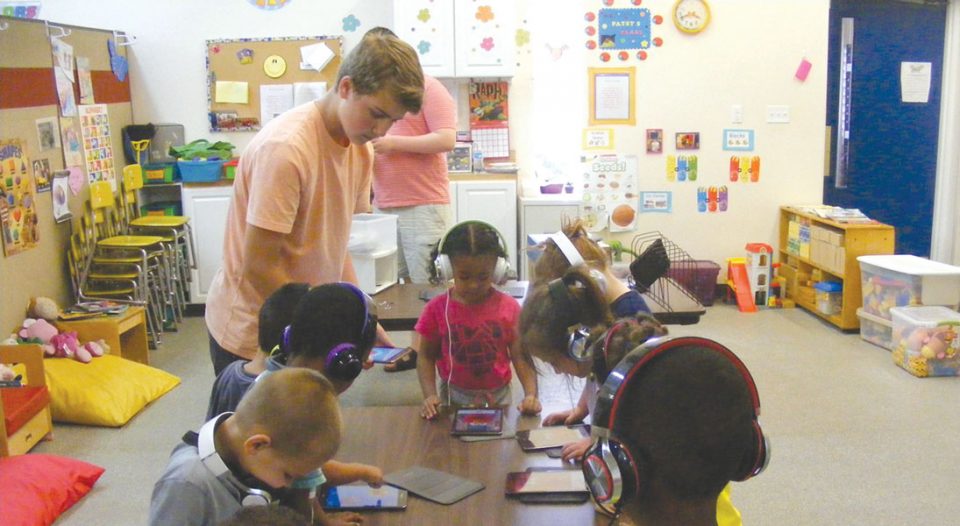 Colin Shuran (orange shirt) teaches preschoolers from the Tullahoma Day Care Center how to use the "Elmo Calls" app on their tablets.

Tech-savvy youth and the latest in tablet technology have connected Trinity Lutheran Church in Tullahoma, Tenn., and the children of the Tullahoma Day Care Center.

The congregation’s “Mentoring Ministry” project  started when MaryBeth Smith heard about grants available through Always Being Made New: The Campaign for the ELCA. The youth and family ministry director wanted to apply for a grant to build leadership skills within her youth group while supporting a local organization.

“One member of our congregation, who also serves on the [day care] board, came to me with the idea to use the grant to purchase tablets for the center,” Smith said. “While the day care already does an incredible job teaching children important skills such as taking turns, respecting authority and waiting in line, there is a glaring need for them to become technologically literate with little resources to help them achieve these skills.”

Emma Coleman, day care director, said the center enrolls roughly 30 students from predominantly low-income families. Smith and Coleman wanted to connect these students with access to technology so they will be better prepared to use it at school.

For Smith’s youth group, “this is [their] area of interest. They know about this. They are passionate about it and teaching it,” she said.

Smith, the youth and several adults from Trinity developed a plan to train the children on using the tablets.

“One of our members who works in IT and another who is a principal at a local middle school met with the youth to advise them on how to purchase, register and use the tablets for educational purposes,” Smith said. “From there the youth took complete initiative of the project. They chose which tablets to purchase, downloaded several apps for the children and led the training at [the day care].”

Coleman said Trinity’s youth were prepared. “They knew exactly what they wanted to say to us as the staff and also to the children when they showed them how to turn the tablet on, get it started, put it back in the case and how to store them,” she said.

The children were ecstatic when they first opened the tablets and learned from Trinity’s youth. “They really are enjoying them, even now since we’ve incorporated them into their curriculum,” Coleman said. “Some of the children don’t have tablets at home, and they hear about them or see them—but to actually get their hands on them and use them always brightens their day.”

In return, Smith said it was incredible to see the Trinity youth grow, enhance their leadership skills and take on increased responsibility throughout the process.

Colin Shuran, a youth who worked closely on the project, said, “I learned many lessons from this experience, including that you should always listen to the kids first because you never know what their perspectives can be. It also taught me that I can strengthen my faith in God by just helping out.”

Smith said all of this was only made possible with the grant: “[It] gave us an opportunity that we might not have otherwise had to partner with a local project and school. It’s something I wouldn’t have thought of—a God moment.”

Of the $198 million ELCA campaign goal, $4 million is devoted to strengthening the church’s youth and young adult ministries.

The campaign has provided grants to 21 youth and young adult ministries, Trinity included, distributing $527,385 so far.

“When reviewing grant proposals, [Trinity’s] stood out because it hits on several of the campaign priorities—faith formation, developing and multiplying youth and young adult leaders, and assisting those living in poverty,” Glusenkamp said. “By engaging Trinity’s youth through this ministry, it provided a wonderful way for them to give and serve. But during that process of giving they also received in return.”

While Trinity’s partnership with the day care started long before the Mentoring Ministry project, Smith said she hopes this will solidify a stronger bond between the two.

“We have done other service projects with the day care before, but this was the first time our youth were able to interact with the kids,” she said. “We hope to follow up with the day care sometime this summer, and we also hope to apply for other grants for the center.”

New ways to proclaim the gospel