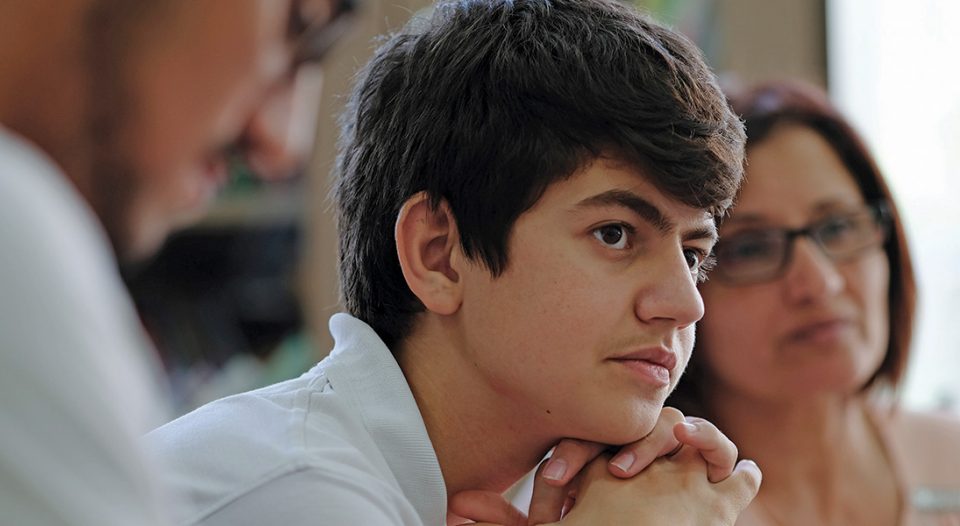 Said’s (last name withheld) participation in the Lutheran Model United Nations (LMUN) is supported by the companion churches and partner organizations of the Evangelical Lutheran Church in Jordan and the Holy Land.

The smiley teen, dressed in a stark white collared shirt embossed with Talitha Kumi Evangelical Lutheran School’s emblem, corrects me when I ask him and the director of the Lutheran Model United Nations (LMUN) why his West Bank school participates in a program designed after the United Nations, an organization that doesn’t fully recognize Palestine.

“Actually, Palestine is a U.N. member, it is what is called an observer. At this time Palestine is not a voting member,” he said. “Everything has a good and a bad side, that’s just a thing in life, but when we talk about the U.N., we try to go to the positive side and try to solve things, and to look at what has happened by looking at the mistakes. The U.N. was made for maintaining peace and security.”

Said (last name withheld) is sharp and confident, yet respectful of the adults in the room. The 12th-grader is also honest and makes no apologies for what he carefully and articulately says in fluent English. “I had nothing to do after school, that’s the truth, and I saw that this [program] is a really good project which brings you many skills … but moreover, it was basically a lot of fun,” he said.

The Model U.N. (MUN) program in which Said participates simulates the real United Nations by gathering high school students of different conferences (or nations) to debate topics as delegates of an assigned country. His participation is funded in part by the companion churches and partner organizations of the Evangelical Lutheran Church in Jordan and the Holy Land (ELCJHL), an ELCA companion church and fellow member of the Lutheran World Federation.

Aside from simply having something to do after school, learning conflict-resolution and communication skills are things Said and others from the conference will carry with them and use in their communities, which are often divided by conflict.

The national MUN Palestine was established in 2010; four years ago the LMUN was created by the ELCJHL education office, with only Lutheran schools participating in the first two. Then it began to grow. Last year’s LMUN had 210 delegates from the participating schools, representing six committees, who discussed topics such as human rights, disarmament and the environment.

Select eighth- through 10th-graders of ELCJHL schools also attend the International MUN. In the past three years they have attended conferences in Holland, India, Slovenia, Cyprus, Germany, Turkey and the Czech Republic.

“We send our students to these conferences all over the world to gain the experience of debate and to see the world,” said Salameh Bishara, former LMUN facilitator and ELCJHL resource and curriculum development officer.

To prepare for these conferences, students must commit to at least 30 hours of training. They are each assigned a country (not their own) and study its foreign policy regarding the issue given within the theme. Students study 30 days before the conference to prepare arguments and “learn everything about a country,” Bishara said.

Rani (last name withheld), another 12th-grader at Talitha Kumi, has served as chair of committees and, most recently, as the delegate for the United States.

His classmate, Said, said of Rani: “The delegate of the U.S. is always expected to be good. All eyes are on the U.S. delegate. The conference always gives the U.S. and Russia to good delegates!”

Rani grins with great dignity. Earlier he added that he joined the program because he wants to share his opinions on politics. “Becoming part of LMUN changed my character,” he said.

One character-changing aspect of the program is that it empowers students to organize, lead and make decisions. After five years of involvement, the students have become veterans and conduct student training for new participants and serve as advisers. “The entire LMUN Conference was organized by students,” Bishara added.

Reem, a 12th-grade student at the Evangelical Lutheran School of Hope in Ramallah, is thankful for the training because it has given her a chance to discover what she wants to do after high school. “I would like to practice international law,” she said. “[LMUN] has taught me about solving issues that must be defended.”

The entire experience from start to finish grooms leaders, but it’s not free and is funded by a variety of sources in addition to the ELCJHL. For many of the students, “it is their only chance of traveling abroad and having contact with Western democratic countries,” Bishara said.

Said’s (last name withheld) participation in the Lutheran Model United Nations (LMUN) is supported by the companion churches and partner organizations of the Evangelical Lutheran Church in Jordan and the Holy Land.

Students from the Evangelical Lutheran School of Hope in Ramallah discuss the impact the Model U.N. and the LMUN programs have had on them.