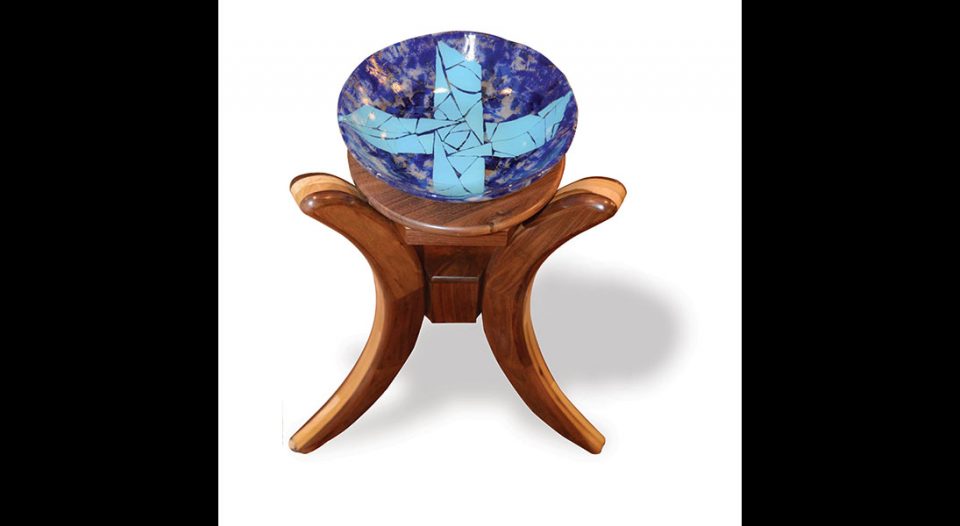 This baptismal font was designed specifically for Common Ground Recovery Ministry based in Wyomissing, Pa. According to the ministry, the shattered pieces of glass used in the design represent “booze bottles, glass syringes … and other paraphernalia that separated us, not only from God, but also from all that sustains life.” The light blue cross represents the waters of baptism in which all are washed clean and given new life in Christ.

Suzanna Hayes says she was broken four years ago. She’d been sober for 14 years but felt stagnant in her recovery.

Around that time she saw a flier for Common Ground Recovery Ministry based in Wyomissing, Pa., at her Alcoholics Anonymous meeting and figured she’d give it a try. But when she arrived, she couldn’t bring herself to walk inside.

“I thought I was a disappointment to God and that I didn’t deserve to be there,” she said. “I walked back and forth between the door and the sidewalk, and I was just screaming at God, saying, ‘What am I supposed to do? I can’t go in there.’ ”

Then something happened that would change Hayes’ life forever. A woman came out from the church and took her by the hand. She led her into the service, sat with her, and every few minutes she leaned over to say, “You’re not alone.”

From then on, Hayes has been going to Common Ground. She makes it a point to welcome newcomers in the same way she was. “There is always hope and if we don’t share it, how will people ever know?” she said.

Hayes credits Tom Scornavacchi, pastor of Common Ground, with both her success in recovery as well as that of the ministry’s.

For Scornavacchi, building the recovery ministry has taken a while. The former addict said he went from being a successful businessman to living on the streets. While homeless, he met a pastor named Luther Routte. “He set me right,” Scornavacchi said. “He started my journey back to life.”

The core of that journey has been helping others recover from addiction. He first worked with a housing program that connected addicts with places to stay. During that time he also went to college, but says by age 59 he got tired of saying “no” to God. “So I packed my bags and went to seminary,” he said.

Following seminary, Scornavacchi began working on Common Ground. “It started in 2010 as a conversation,” he said. “We asked what we could learn from the 12-step community that could be valuable to traditional church ministry.”

He started a speaker series that invited people to talk about how the 12-step program had worked in their lives. Then it branched out into educational programs that welcomed loved ones to learn how recovery works.

Meanwhile he started holding services directed toward recovering addicts. Scornavacchi now holds two services per week plus a prayer and meditation service. Additionally, once a month he holds a healing service where people can talk about their journey and ask for prayer.

While he describes those services as traditional, he said they follow the 12-step program rather than the lectionary, with exception for special seasons like Advent or Lent.

While Scornavacchi said Common Ground is specifically a recovery ministry, that doesn’t mean only addicts and alcoholics are welcome. “We believe that all people are recovering from something, whether it’s drugs or alcohol or abuse or just the general hurts and hang-ups from life,” he said. “We say all are welcome in our community and we mean that.”

At Church of the Damascus Road in the Walker Sayle Unit of the Texas prison system, Dan Lund also leads a recovery ministry. The recovering addict became a synodically authorized worship leader in 2014. He works with prisoners on their recovery every Saturday, holds worship with communion every other Friday, and organizes a worship band and choir made up of inmates.

“This is my church, here inside the prison,” he said. “I don’t do this for recognition; I do this to help save souls.”

Jeffrey Myrick is one such soul. “I surrendered myself to the Lord and I was reborn on the unit,” he said.

Myrick is out of jail and clean now, and he’s still close with Lund. “We help people who are right on the edge, who are falling in the cracks of society,” he said. “Helping other people is the best way to aid in your recovery. I used to do drugs and drink every day and now I work for Jesus—that’s better than any high I ever had.”

Rachel Bouman, ELCA program director for disability ministries, is interested in growing recovery-based ministries, as they welcome people to the church who might not have found it otherwise.

“People go to Alcoholics Anonymous meetings or Bible-based recovery meetings and they get involved in the Lutheran church that way,” she said. “These ministries are really important to the ELCA because they show God’s grace in action.”

Recovery and the church
Our world is full of broken people and individuals who are flawed, right? And aren’t we all right there among them? Some of our brothers and sisters are suffering from particularly tenacious problems that arise from compulsive behaviors or use of substances. Thanks to the fellowship we have in Jesus Christ, we can walk with recovering addicts and support them in their journey to wholeness, even as they support those of us whose problems and addictions are not as destructive to ourselves and our families.
Download Now