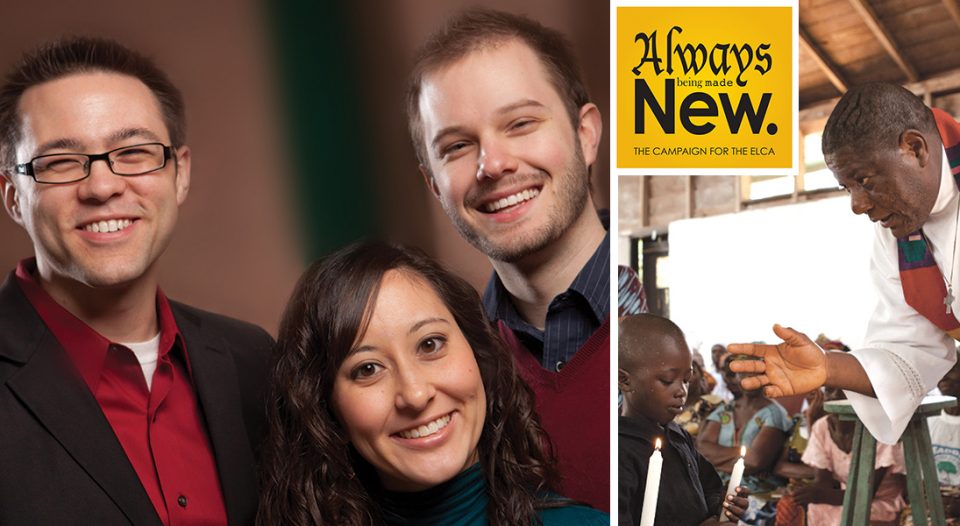 Celebrating 25 years as a church body and bringing together members, congregations, synods and partners in ministry, the ELCA’s five-year, $198 million “Always Being Made New: The Campaign for the ELCA” aims to glorify God by advancing the important work and strengths of the entire denomination. Reflecting on the past yet positioning itself for the future, the church believes now is the time to come together under a common purpose—a belief described in the focus “Together we can do more.”

Approved by the 2013 Churchwide Assembly (the ELCA’s governing body), the fundraising effort was launched in early 2014. As of Sept. 30, the campaign had received more than $96 million in cash and multiyear commitments, representing 48 percent of its goal.

Robert and Rebecca Shaw, longtime members of Faith Lutheran Church in Clive, Iowa, and part of the campaign steering committee, say there is something for everyone to support in this campaign, referring to the various ministries and projects the ELCA has committed to sustaining, growing or deepening through this fundraising effort.

Ron Glusenkamp brings more than 30 years of experience in ordained ministry to his role as director of the Campaign for the ELCA. He provides the knowledge, passion and relationship-building expertise required to pull off such a large, comprehensive endeavor. In his role he meets with the campaign’s steering committee, congregations, synod leaders, individual donors and other partners in ministry.

Glusenkamp likens his position to being the director of a play or symphony. “It’s about taking the gifts and abilities of individuals, congregations and synods and getting them all to be harmonious with each other for a common good,” he said.

He sees his role as not just a job, but as a vocation. With a deep passion for the ELCA and God’s work through each of the 10 campaign priorities, Glusenkamp said he feels a personal calling to do this important work.

“I do what I do because I love God and God’s people the church,” he said. “I am humbled to serve as the director of this effort to engage individuals, congregations and synods in sharing the abundant gifts God has given to us all.”

“The campaign gives us the ability to be the church way beyond our local neighborhood,” said Jill Henning, pastor of faith development at Trinity Lutheran Church in Lilburn, Ga. “Because of the ELCA campaign, my congregation in Lilburn can do ministry by fighting malaria. We can help bring the message of God’s grace to a new congregation or help a congregation find where the Holy Spirit is calling them to do ministry now. We can make the gospel accessible to those with disabilities. And we can equip young adults to do ministry around the world and at home.”

Composed of 10 different priorities, each signifying an important part of the life and work of the ELCA, the campaign is paving the way for the church’s future. Each of the 10 priorities fit into four larger umbrellas—congregations, leadership, the global church, and hunger and poverty—and fund very specific work.