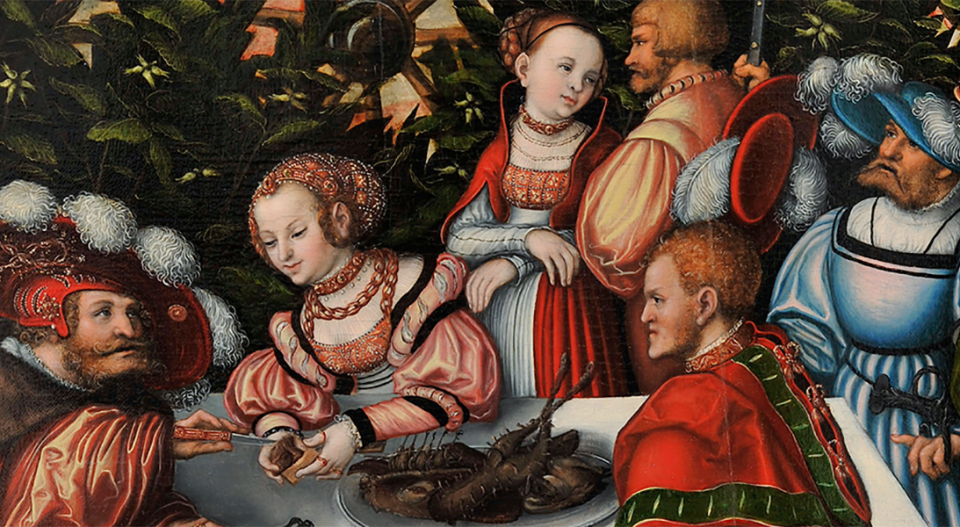 Judith at the Table of Holofernes, Lucas Cranach the Elder, 1531; Germany. On display at the Minneapolis Institute of Art, "Martin Luther: Art and the Reformation"

I looked into the glass case, my eyes inches away from notes Martin Luther wrote the night before he answered the pope and emperor at Worms. Just behind me was a large chest hauled through Saxony 500 years ago, collecting coins from people paying for indulgences.

In another case, I peered at a letter Luther wrote to a monk when the future reformer was a “visitor” for his Augustinian order. Difficult handwriting, I thought.

Those experiences were at the “Word and Image: Martin Luther’s Reformation” exhibit at the Morgan Library in New York City.

Earlier in Minneapolis, I had seen a 1534 edition of Luther’s translation of the New Testament and stood under the pulpit from the church in Eisleben, Germany, from which Luther preached his last sermon shortly before he died.

The Minneapolis Institute of Art exhibit, “Martin Luther: Art and the Reformation,” also put me close to ink stands from Luther’s desk, a 1523 letter to followers in the Netherlands, paintings of Martin and Katherine Luther by Lucas Cranach, and a scary “hood” worn by doctors treating plague victims, its long “beak” having been stuffed with herbs to ward off the disease.

I have visited Luther sites in Wittenberg, Erfurt and Eisleben in Germany (where some of the exhibit items originated), but it was special—this year being the 500th anniversary of the Reformation—to see these collections of items from Luther’s time.

There is something mystical about being so close to such artifacts. I get the same feeling at historical locations, my feet on the actual ground where monumental things happened. Lutherans do not invest relics with any “holiness,” but I’m always moved when I’m close to the actual items that played a role in extraordinary events.

The items themselves fascinate. There is a richly embroidered chasuble, which Luther may have worn, with a suffering Christ on the back. In New York, I could squint and read the imperial ban issued against Luther when he refused to recant. And in the Minneapolis exhibit, a golden “arm” was once believed to hold the arm of St. James, part of the elector of Saxony’s large collection of relics.

My mind raced through what must have happened with these items. Someone held and read this pamphlet containing Luther’s writings. Did it convince the reader? Or did the reader throw it away?

There is a letter Luther wrote to Pope Leo X. What was in his mind as he wrote it? He was seeking reconciliation. Did he have any hope of being heard?

In New York, I sought familiar Latin words and phrases in a letter from the pope to Elector Frederick of Saxony. He was Luther’s protector, and Frederick held this very declaration in his hands, promising him reward and honor if he would silence his troublesome monk. Were his hands shaking as he read it? Was he tempted to comply?

Vicious Reformation era polemics leapt off the page of cartoonish woodcuts of pamphlets and books. The pope as a donkey. Luther with seven heads. Drawings mocking Luther’s teachings or Roman authority. I imagined the people who held these publications and either laughed (if they agreed) or were outraged (if they disagreed).

I could easily read words and music for “Ein Feste Burg” in a hymnal published in 1533. I thought about the person who sang from this hymnal, perhaps after hearing Luther preach.

I saw the pamphlet published at Luther’s death, written by the friends with him when he died. The pamphlet no doubt sped around Reformation territory telling people that he died calm and firm in his convictions. I thought of those who must have handled this small publication, perhaps weeping, perhaps wondering if the reforms would survive the reformer.

There is a handle from Luther’s coffin and a picture of Katherine Luther in mourning garb, and I could imagine the grief she must have felt following their surprising union and loving family life.

A book of Luther’s sermons, printed in 1593, reminded me how the “new technology” of the printing press was employed to spread and preserve Reformation teachings.

The items in those exhibits are all “things,” relatively ordinary material objects of wood, paper, metal or ceramic. But great movements, great ideas and the Word of God have come to us through those “things.” It was very good to be near them.

What the widow’s mite taught me about generosity