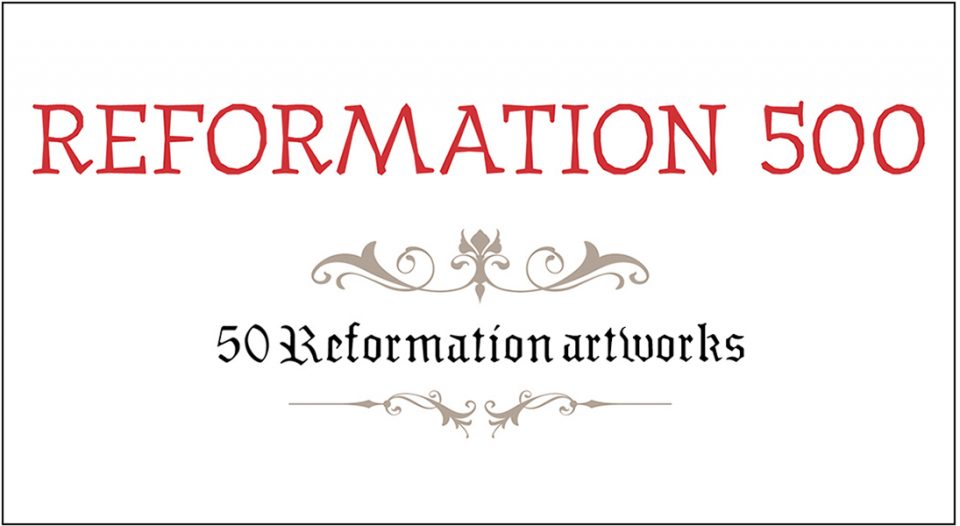 As we commemorate the 500th anniversary of the Reformation, Living Lutheran is exploring 500 of its unique aspects, continuing our series this month with 50 Reformation works of art.

This list is not meant as an all-encompassing compendium of everything essential to the Reformation and its theology, but rather as a glimpse of the variety of ways the movement that Martin Luther sparked in 1517 would influence the history of the world.

Albrecht Dürer, The Last Supper (1523)
Motivated by the belief that emphasizing religious imagery was idolatrous, the Reformation caused a significant reduction in religious art produced in Protestant countries. But certain art forms, such as printmaking, were accepted due to their more modest, private nature. Dürer’s woodcut expresses a Protestant outlook by depicting Jesus giving his new commandment, after Judas had fled the scene.

Heinrich Aldegrever, Death and the Bishop (1541)
Luther was the most open of the reformers to religious imagery, if it was limited to personal engagement with symbolic spiritual imagery. A pupil of Dürer’s, Aldegrever was an engraver whose small prints depicted a Lutheran theology. Death and the Bishop, from his Power of Death cycle, criticizes clerical corruption.

Daniel Hopfer, Illustrations to Proverbs 2: The Hoarders of Grain (1534)
This etching recounts the Proverbs passage on the virtues of sharing grain, rather than hoarding it. It wasn’t difficult to see the image as an analogy for the ruling class and the church ignoring the needs of common people.

Erhard Schön, The Devil Playing the Bagpipe (c. 1530)
The advent of the printing press allowed for the spread of Reformation ideas in the form of pamphlets and propaganda art. Regardless of one’s literacy, this irreverent print would have gotten its point across.

Matthias Gerung, Satire on the Sale of Indulgences (before 1536)
Broadsides were large sheets of popular woodcuts printed on one side of a sheet of paper, often the least expensive and most shared prints available. This broadside satirizes the sale of indulgences without the necessity of including any text.

Lucas Cranach the Elder, Martin Luther (1528)
Perhaps the most prominent artist of the Reformation, Cranach was Luther’s friend and particularly known for painting many portraits of the reformers, including this iconic Luther portrait.

Hans Holbein the Younger, An Allegory of the Old and New Testaments (c. 1530-1535)
Inspired by Cranach’s painting The Law and the Gospel, Holbein depicted in the left panel an Old Testament characterized by decay, and in the right panel a New Testament vision of hope, in keeping with the reformers’ theology.

Lucas van Leyden, Worshiping of the Golden Calf (c. 1530)
This triptych depicts the Israelites disobeying God by worshiping a golden calf statue. Some have interpreted this work as being analogous to the idolatry the reformers saw in the Roman Catholic Church’s relationship with religious imagery.

Lucas Cranach the Elder, Wittenberg Altarpiece, Predella (1547)
Part of Cranach’s altarpiece for the Church of St. Mary in Wittenberg, this piece depicts Luther preaching in the pulpit, with a crucified Jesus in the center to represent the need for Christ to be at the center of a sermon.

Heinrich Füllmaurer, Gotha Altar (1539-1541)
This extensive piece includes 160 panels offering a Protestant presentation of the Gospels, incorporating contemporary clothing, a lack of halos (typical in Catholic art) and criticism of the papacy.

Albrecht Dürer, The Four Apostles (1526)
This panel painting depicts John, Peter, Paul and Mark, and emphasizes the importance of Scripture.

Lucas Cranach the Younger, Adam and Eve (1537)
While depictions of central biblical stories were rarely and carefully handled in Protestant art, exceptions were sometimes made for humble presentations that focused on the biblical figures’ humanity.

Hans Holbein the Younger, Noli Me Tangere  (c. 1524)
Although depictions of Jesus were generally uncommon in Protestant art, Holbein’s small painting presented the resurrected Christ and Mary in an intimate and naturalistic style, in contrast to the iconic style of Counter-Reformation art.

Rembrandt van Rijn, Return of the Prodigal Son (c. 1661-1669)
More than a century later, Rembrandt—considered one of the greatest painters of all time—continued this theme by telling Jesus’ parable in a way that evokes human sympathy modestly but powerfully.

Pieter Bruegel the Elder, The Peasant Wedding (1566-1569)
Rather than focus on explicitly religious subject matter, Protestant art often depicted the everyday lives of common people. The Peasant Wedding depicts a celebration, but one that is humble and simple.

Pieter Bruegel the Elder, The Hunters in the Snow (1565)
One of the most famous Protestant paintings, the piece depicts the daily routines—both difficult and enjoyable—of people in the winter. The mundane and the beautiful are presented side-by-side.

Jan Vermeer, The Milkmaid (c. 1632-1675)
Similarly, Vermeer’s Milkmaid highlights the virtues of work and the pious people who perform such work. Protestant art’s focus on individuals is in keeping with the Reformation’s focus on personal relationships with God.

Lucas Cranach the Elder, Martin Luther on His Deathbed (c. 1600)
Cranach’s depiction of a dying Luther aimed to convey the reformer facing death with serenity and calmness.

Emanuel de Witte, Interior of a Church (c. 1660)
De Witte depicts a typical post-iconoclasm Protestant church in Europe: whitewashed, with the pulpit as the central point of focus, rather than a decorated altar.

Harmen Steenwyck, An Allegory of the Vanities of Human Life (1645)
In contrast to the grandiosity of Catholic Counter-Reformation art, still-life paintings flourished in 17th-century Reformation art. In particular, vanitas art—as typified by Steenwyck—depicted still-life scenes with symbolic biblical values about the transience of earthly life.

Jan Davidsz. de Heem, Flower Still-life with Crucifix and Skull (1630s)
This vanitas piece depicts an array of symbolic objects, emphasizing both life and death, and the importance of using our time on earth well.

Albrecht Dürer, The Four Horsemen (1498)
The most well-known entry in Dürer’s Apocalypse series, this woodcut dramatically conveys the four horsemen from the book of Revelation.

Hans Baldung Grien, Martin Luther with a Dove (1521)
Grien’s woodcut portrait of Luther depicts him as a saint, with the dove of the Holy Spirit in a halo above Luther’s head. The image became popular during the Diet of Worms.

Melchior Lorck, Satire on the Papacy (1555)
Another example of an unsubtle propaganda etching, Lorck’s Satire depicts the pope with three symbolic heads.

Lucas Cranach the Elder, Against the Papacy at Rome, Founded by the Devil (1545)
This significant piece of propaganda art illustrated a Luther pamphlet that took one of his fiercest stands against the papacy.

Hans Weiditz the Younger, Cat Before the Mouse King (c. 1522)
This woodcut uses allegorical characters to celebrate the disruption of power and class that Reformation advocates sought.

Pieter Bruegel the Elder, The Blind Leading the Blind (1568)
In keeping with Reformation art’s tendency to stay away from direct depictions of biblical figures, Bruegel here illustrates Jesus’ parable of the blind leading the blind.

Lucas Cranach the Younger, Christ and the Adulteress (c. 1545-50)
Cranach may literally depict Christ in this painting, but its depiction was personal, rather than overly grandiose, here highlighting a Lutheran theology of grace.

Rembrandt van Rijn, Raising of the Cross (1633)
While Reformation art didn’t typically depict the crucified Christ, Rembrandt here inserts himself into a depiction of raising Christ on the cross, thus reinforcing the Protestant notion of personal interaction with God’s story.

Lucas van Leyde, The Milkmaid (1510)
Long before Vermeer’s depiction of a milkmaid, van Leyden captured scenes of typical peasant work in engravings such as this one.

Daniel Hisgen, Selling of Joseph (1765)
One of 48 paintings Hisgen commissioned for a church in Bobenhausen II, Joseph was typical of the parapet cycle works Hisgen created for Protestant churches with upper galleries.

Lucas Cranach the Elder, Judith Dining with Holofernes (1531)
Cranach depicts the Old Testament story of Judith, whose modest nature and actions made her a celebrated figure for Lutheran reformers.

Lucas Cranach the Elder, Katharina von Bora (c. 1530)
Along with his iconic portrait of Luther, Cranach’s other well-known portraits depicted many other key figures in the Reformation, including Luther’s wife, Katharina.

Lucas Cranach the Elder, Portrait of Elector Frederick the Wise in His Old Age (1525)
Cranach served as the court painter for Frederick III and painted several portraits of the Elector of Saxony (and defender of Luther), including this one, likely made shortly after his death.

Albrecht Dürer, Philip Melanchthon (1526)
This engraved portrait of key Reformation figure Melanchthon was one of the last of Dürer’s portrait prints.

Lucas Cranach the Elder, Johannes Bugenhagen (1537)
As pastor of the city church in Wittenberg during the Reformation’s spread, Bugenhagen was also a key reformer and thus was a portrait subject of Cranach’s.

Hans Holbein the Younger, Portrait of Henry VIII of England (c. 1537)
One of the 16th century’s most prominent portraitists, Holbein here regally depicts King Henry VIII, not long after he became supreme head of the Church of England.

Lucas Cranach the Elder, Wittenberg (1536)
Cranach’s painting (and other similar woodcuts of his) displays the town that Luther and the Reformation were closely connected to.

Pieter Bruegel the Elder, The Procession to Calvary (1564)
Bruegel presents Christ carrying the cross as one among many people in the scene and depicts the Roman soldiers escorting Christ as Spanish Catholics oppressing Flemish Protestants.

Pieter Jansz Saenredam, Interior of the Buurkerk, Utrecht (1645)
Another of Saenredam’s influential architecture portraits of Protestant church interiors, Buurkerk is well-known as an example of the artist’s perspectival achievements.

William Frederick Yeames, The Dawn of the Reformation (1867)
Yeames here traces the Reformation’s events back to John Wycliffe distributing early editions of his English translation of the Bible.

Read another story on Reformation art (featured below in Related Articles.)

Ordinary artifacts from an extraordinary movement