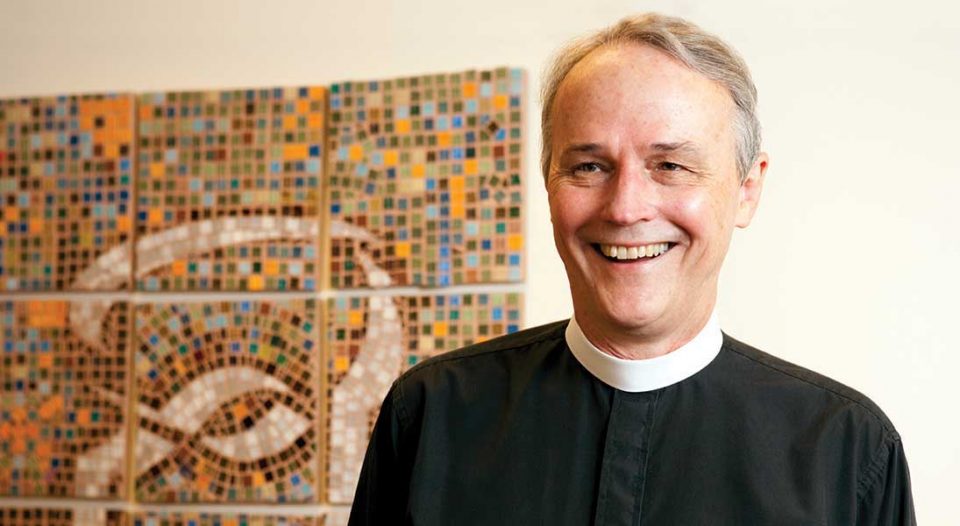 “I’m a Lutheran” is a monthly profile featuring ELCA members around the world. The profiles showcase ELCA members in all their diversity, connecting one another through individual faith stories as Lutherans. Sentence prompts are provided to each person featured. If you’d like to nominate someone for “I’m a Lutheran,” email megan.brandsrud@elca.org.

Occupation: President, Bread for the World

The best part of my job is that Bread for the World helps people and churches from all of U.S. Christianity speak up for laws and programs that help our country and world move toward the end of hunger. Again and again, Bread for the World and its members have benefited millions of hungry people. We do it in the name of Jesus.

As both an ELCA pastor and an economist, my call is to help relate Christian faith to policies that provide help and opportunity to hungry and poor people.

My favorite piece of Scripture is Matthew 17:20: “If you have faith like a grain of mustard seed,” you can move mountains. As a Lutheran, I always knew that we’re saved by faith, not works. But Jesus assures us that we don’t even need much faith. If we have just a little faith, God uses us in powerful ways. That’s my experience.

People are surprised that I am convinced that we can end hunger in our country and around the world by 2030. Pope Francis, Bill Gates and the World Bank are also convinced. The number of people in the world in extreme poverty has been cut in half since 1990, and we have also reduced hunger and poverty within the United States. We know that further progress is possible.

Receiving the World Food Prize in 2010 was confirmation that the advocacy of Bread for the World and its members has helped to move our country and the world toward the end of hunger.

I struggle with President Donald Trump and Congress pushing for deep cuts in many programs that help hungry and poor people in our country and around the world. Bread for the World, together with nearly all the church bodies in the country, is pushing back. We work with political leaders from both parties to make these programs effective, but we oppose cutting back on help to families who are struggling to feed their children.

To people who think religion and politics are separate matters, I say the U.S. Constitution protects religion from government and allows all of us to help shape what our government does. The Bible is clear that God cares about how laws treat vulnerable people and that believers are often called to make that clear to national leaders. God didn’t send Moses to Pharaoh to take up a collection of canned goods, but rather to insist that he let the slaves go free.

I’ve been to more than 70 countries, and I enjoy getting to know people in different parts of the world and different parts of our country. There are lots of places I’ve never been, and there’s a lot to learn in places I know well.

My favorite church memory is from the months before Pope Francis visited the United States when I traveled twice to the Vatican and met with his advisers. In the process I learned a lot about this extraordinary pope and his grace-grounded ministry. On the eve of Pope Francis’ arrival, Bread for the World convened leaders from all the faith traditions in our country to reflect on his teaching about ending hunger. We committed ourselves to working to align our national priorities with this possibility.

If I could dispel one myth about hunger, it would be that the problem is too big to overcome.

In the next 10 years, I see Christianity in this country playing a leadership role in achieving the dramatic reduction in hunger that God has made possible in our time. What a powerful witness to the power of God’s grace in Jesus Christ that will be!

I share my faith by working for changes that make the world more consistent with the fact that God loves everybody. Bread for the World members who defend the interests of hungry people make Christianity more credible and more attractive in our country and around the world.

My experiences testifying before Congress have been encouraging. In my experience, most members of Congress in both parties are good people trying to do good things. They are all responsive to what people back home want them to do. The problems we see in Washington are rooted in the bitter divisions within our country—between rich and poor, among ethnic groups, between conservatives and liberals. Each of us has a role to play in solving these problems.

I pray for the leaders and people of the United States in this unsettled time. I pray for those who are working so hard to make ends meet and feed their families. I pray for the end of hunger in our country and around the world.

I’m a Lutheran and I thank God that U.S. Lutherans have persistently focused on reducing hunger for the last 45 years. ELCA World Hunger and the ELCA advocacy program do great work, and thousands of ELCA congregations support Bread for the World and write letters to Congress. U.S. Lutherans have contributed significantly to the progress that has been made toward the end of hunger in our country and the world.