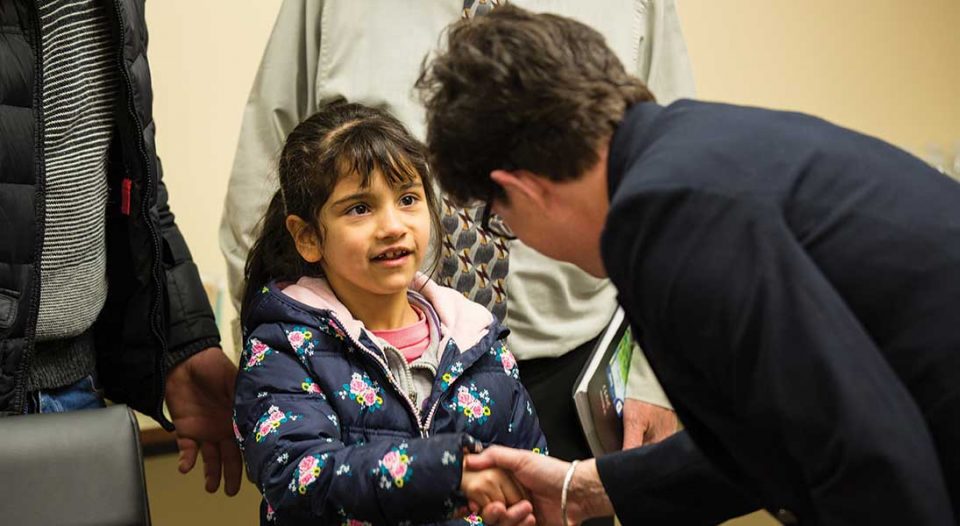 ELCA Presiding Bishop Elizabeth A. Eaton meets a refugee during a visit to RefugeeOne in Chicago on March 21. RefugeeOne has resettled more than 16,000 refugees since 1982.

ELCA Presiding Bishop Elizabeth Eaton joined more than 100 Lutheran leaders, ELCA members and international partners in Washington, D.C., March 27-29 for the 2017 ELCA Advocacy Convening. The gathering, organized by ELCA Advocacy and Lutheran Immigration and Refugee Service, focused on issues surrounding welcoming and protection for refugees and migrant children and families. During meetings on Capitol Hill, participants urged members of Congress and their staff to ensure the full and continued operation of the federal refugee resettlement program and to support compassionate policies that provide immediate protection for families from Central America. Conversations included asking Congress to consider robust support for the International Affairs Budget, which funds humanitarian programs addressing the root causes of forced migration.

On March 26, the United Church of Christ (UCC) Center in Cleveland hosted a worship service in celebration of the 20th anniversary of the “Formula of Agreement,” which established full communion between the ELCA, the Presbyterian Church (U.S.A.), the Reformed Church in America and the UCC. Heads of communion, local judicatory leaders, ecumenical officers, and local clergy and lay leaders participated in the service, held in conjunction with a meeting to explore the next chapter of life together as full communion partners.

The ELCA Conference of Bishops emphasized leadership development and congregational growth when it met in Itasca, Ill., March 2-7. The conference is an advisory body of the ELCA that includes 65 synod bishops, the presiding bishop and secretary. In her report to the conference, ELCA Presiding Bishop Elizabeth Eaton highlighted major initiatives happening across the church, including the shared-leadership framework “Called Forward Together in Christ: Strategic Directions 2025.”

The ELCA’s first comprehensive campaign, “Always Being Made New: The Campaign for the ELCA,” is celebrating the beginning of its fourth year with $113 million in cash gifts and gift commitments, representing 57 percent of the five-year, $198-million goal by Jan. 31, 2019. Through the campaign, members and congregations help strengthen and expand ELCA ministries in four priorities—congregations, hunger and poverty, leadership and global church.

John Carl Ylvisaker of Waverly, Iowa, died March 9 at age 79. The prolific Lutheran composer was best known for his song “I Was There to Hear Your Borning Cry.” Throughout his career, Ylvisaker worked for the American Lutheran Church (ALC) and became its “composer-in-residence.” After the formation of the ELCA, Ylvisaker traveled the country leading music at churches, conferences and conventions. He also led music at National Youth Gatherings for the ALC and ELCA, for which he wrote theme songs for four decades.

Presiding Bishop Elizabeth Eaton met with refugees in Chicago March 21 during a visit to RefugeeOne, an affiliate partner of Lutheran Immigration and Refugee Service. The largest full-service agency of its kind in Illinois, RefugeeOne has resettled more than 16,000 refugees since 1982. “The people we met at RefugeeOne just wanted another chance. A chance for freedom, a chance for a better life for their children, a chance for peace,” Eaton said. “They were working hard to learn English and learn a new trade.”

ELCA-affiliated Advocate Health Care, along with two other hospital networks, are pitted against employees in a case that has gone before the U.S. Supreme Court. The employees object to the institutions’ religious exemption from a federal law that protects pensions. The law, the Employee Retirement Income Security Act, requires that pension plans be insured and sufficiently funded. Advocate, along with the other two hospital systems involved, believe they don’t have to follow the law because their pension programs are church plans, which are exempt from the law. Attorneys representing the employees say that exemption wasn’t intended to include giant businesses. The court’s decision is expected in late spring or early summer.

Four countries on the brink of famine

For the first time in recorded history, four global famines threatened to break out in March in South Sudan, Yemen, Nigeria and Somalia. More than 7 million people in South Sudan need humanitarian assistance as a result of drought and renewed violence. According to UNICEF, famine was declared in the north-central part of the country, where 100,000 people were facing imminent starvation. The ELCA sought to strengthen its commitment to ongoing work in South Sudan with the #SouthSudanNow hashtag on social media. Find out more at elca.org/southsudannow.

“The church will solidify our continued presence and serve as a visible sign of hope and location for health care, aimed especially at a reduction of maternal and child mortality.”
—Dan Rift, ELCA director for world hunger and disaster appeal, on the new Evangelical Lutheran Church Africa Mission in South Sudan.